The What? Why? and How? of SpagvemberFest! 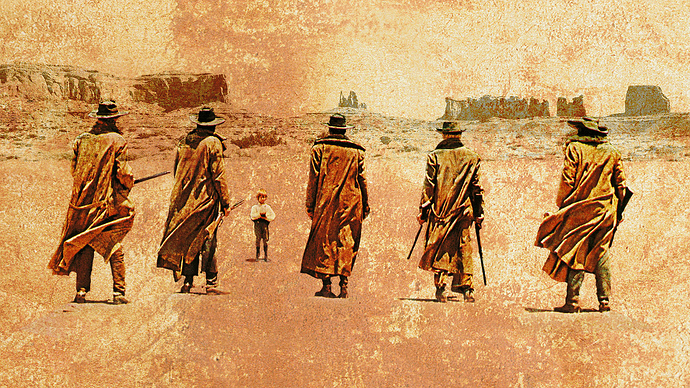 SPAGVEMBERFEST! Um… SpagvemberFest? Really? If you’ve ever moseyed on into the Spaghetti Western Database for a quick look at what’s what, you may well have seen the term bandied around without knowing what it means. Well, that’s where this post comes in!

SpagvemberFest: What is it?
I love watching movies in themed, marathon sessions. Love it. Now, in October, with its built-in All Hallow’s Eve climax, marathon horror-themed movie sessions abound. “31 Days of Halloween” just writes itself, right? Everyone’s watching a horror movie (or two) a night, every night, in October. It’s a no-brainer. Now, December kind-of writes its own, festive-themed movie sessions too, doesn’t it? A Christmas movie a day, every day until New Year’s Eve? Well, actually it’s harder than you think; way harder than 31 horror movies in October for sure. But that’s by the by. If you’re the type of obsessive movie nut who likes to watch horror movies all through October and Christmas flicks all the way through December… what are you going to do to fill that horrible barren gap in November?

This is the conundrum in which I found myself in November 2014, caught 'twixt a sweet Halloween movie challenge throughout October and a mindending Christmas challenge throughout December. So, I thought I’d fill the 30 day void between challenges by watching a spaghetti western every day in November. And I posted which spag I’d watched each day to the SWDb forum so’s I could share my movie marathon with my spag-loving brethren. And I guess a few of them thought it looked like a good way to put some spice into an otherwise dull month because, as we approached November 2015, others were asking me if I was doing the same that year, and saying that they may well be doing likewise. Resident drunkard @Phil_H started a thread dedicated to the endeavour and lo, the 30-day November Festival of Spags - or SpagvemberFest - was born.

SpagvemberFest: Why would anybody watch a spag a day for a month?
Well, why not? What else are you going to do all through November, the most boring month on the calendar (until SpagvemberFest came along, of course)? I mean, what else has November got going for it anyway? Nobody looks forward to November. Frankly, the entire month has been slacking off for years. It was about time it started pulling its weight.

SpagvemberFest: How to get involved
So, you want in? Of course you do! But how? Well, you’re in luck, because SpagvemberFest is simplicity itself.

All you have to do is try to commit to watching one spaghetti western a day, every day, throughout the month of November. So, thirty spags in all. And that’s it! But hey: What happens if you miss a day? Or if you forget one? Or if you simply can’t commit to thirty films in thirty days? What if you can only do twenty-five? Or nineteen? Or twelve, or six? I’ll tell you what happens: Nothing! It doesn’t matter! It’s fun to try to challenge yourself to watch a spag every day - I’ve even taken a portable DVD player and a DVD round to friends’ houses before just so’s I can keep watching spags - but if you can’t quite make it on this day or that, it’s fine! It’s not a competition and you’re not “out” if you don’t complete the month. What’s important is that you have fun with it.

Same goes with exactly what you’re supposed to be watching. Have fun with your choices. Be creative. Or don’t. It’s up to you, as long as you’re happy with what you’re watching. Now, I tend to theme my Spagvembers. For instance: one year, I watched my thirty favourite spaghettis. Another year, I only watched spaghettis featuring the names Django, Ringo, Sartana, Sabata or Trinity in the title. One truly demented year, @Phil_H only watched spaghettis starring Anthony Steffen. He’s never been quite the same since. But you don’t have to theme your movie choices. Most use SpagvemberFest as an opportunity to either indulge themselves by watching their favourite spag blu-rays (which I’ve done before) or to catch up with a bunch of more obscure titles they’ve not gotten around to yet (I’ve done that too).

You can watch any combination of thirty spags you want. Good ones, bad ones, ones you’ve seen a thousand times or ones you’ve never seen before. They can be films you own on DVD/blu-ray, or they can be films you’re streaming (legally!) from YouTube or Netflix or Amazon or wherever. Any thirty you like as long as you’re watching - or trying to watch, at least - one a day. Hell, you can even watch the same one spag on thirty consecutive days if you’re silly enough to want to try something as mind-numbing as that (and yes, that’s exactly what I attempted in 2020). And, whenever you watch one, come visit the SpagvemberFest thread HERE and tell the rest of us about it. Tell us what you saw, what you’re watching next, if you’re starting to go insane with spaghetti-induced trauma, if your wife has threatened to take the kids and leave if you don’t stop watching those poxy Italian movies right. This. Minute! Just let us know how your SpagvemberFest is going.

And that’s it! So saddle up, hombres! SpagvemberFest 2021 is already underway! Giddy up!

How would everyone like an incentive for participating in the 'fest?

thanks for the awesome information.

I see this is your first post. Welcome aboard!

I have a whole bunch on the rewatch pile . This has given me an excuse to plow through them . 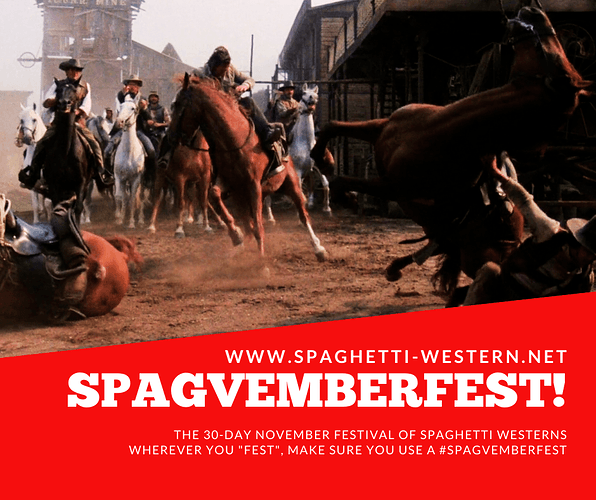 From the great @p.pereira … little over 24h left until we start the spagvemberFESTivities

Well i"m inn .will be watching one spaghetti western a day for a month . i do this every day seems anyways. will be checking inn. Think this is a great idea. also Fun!

A post was merged into an existing topic: SpagvemberFest!

How to get that wallpaper? I love it.