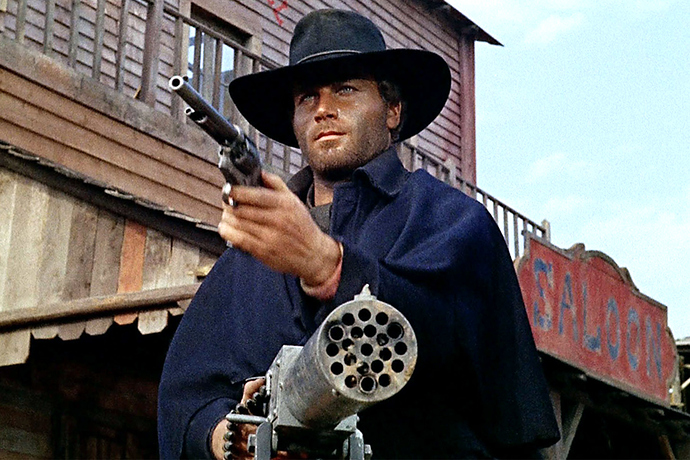 The one spaghetti western that everyone seemingly has heard of, even if you haven’t seen the original is Django. Mr. Quentin Tarantino’s popular take called Django Unchained filled with all elements of a western informed by his style of film-making was widely appreciated by fans and critics alike.

But as Franco Nero has said it in the past there can only be one Django. He has recounted how many times he has been referred to as Django abroad and in several places, they just know him by that name. A theatre actor, he had initially thought about refusing the movie but eventually changed his mind after recommendations from well-wishers. What he said yes to was a role which launched him into stardom and enabled him to act with some of the finest directors of Europe.

Django, along with a handful of westerns can be said to rival the appeal of the Dollars trilogy among the fans of the genre, given that more than thirty Django knock-offs were produced to bank on the popularity of the original.

The story begins with Django rescuing the damsel in distress Maria from a set of racist fanatics (who look like klansmen dressed in red, perhaps a reference to the Confederate red-shirts). The entire sequence is bit of a subversion as Maria is initially being whipped by Mexicans, who are killed by the men, but soon it becomes clear that they want the mixed-race prostitute dead as well. (By burning her on a stake)

He enters the town with the rescued lady and fends off the red klansmen of Jackson, leaving Jackson alive (“ I’ve got one bullet but that would be taking advantage .”), an act not of kindness but pragmatism as Jackson arrives with his army who are routed by Django with a little help from his ‘friend’ in the coffin. Soon the Mexicans led by Hugo arrive and the plot becomes clearer, Django is there to help them procure another machine gun and earn some gold through an adventure down south in Mexican Army’s Charriba fort. The events that follow include a betrayal, an escape, a tragedy and final redemption of Django.

Django is introduced as a hero, helping out the ladies in distress (Maria and the women at Brothel) and fending off the racist Jackson army. He is seen healing after death of his only love and it is hinted that his actions may be motivated by revenge. However mid-way into the movie he turns into an anti-hero, one who is there for the gold that is awaiting them at Fort Charriba and stating that he’s gotten the Mexicans their girl (Maria) back, thus creating the idea that his intentions were not based out of moral considerations or his affection for Maria. He steals the gold when Hugo seems unwilling to part easy with a good hand like Django, taking Maria with him only when there is no other choice and even jumps into the quicksand in his greed. However, the loss of gold and after nearly losing Maria and his hands, he returns to the ghost town saving Maria’s life and gets ready to face his rival Jackson, who had killed his love, so that everyone can have peace. This final arc redeems Django as a hero.

He clearly has a special hate for Jackson (who killed his wife) and his men. When Nathaniel tells him that “ Jackson is going to kill us all like the Mexican fools whom he considers inferiors ”, Django sure of himself responds with “ He has no right to consider anyone inferior .” Thus, unlike Joe from A Fistful of Dollars, He is not willing to play one side against the other even if he is an opportunist. However, at the same time unlike Trintignant’s Silence featured in The Great Silence, (a movie which was master of subversion even in the spaghetti western world) he is not simply doing it for revenge or for helping the ‘weaker’ sections. He has his eyes set on gold.

Franco Nero was considered the most definitive Django in Spaghetti Westerns and he shows his range as an actor in the movie. He has revenge in his eyes and is sure of which card he seeks to play next and at what time. The story has been created to revolve around the events of one particular phase of Django’s life and Franco Nero thrives in the attention that is given to him. He is especially believable in the final sequence, when facing off for a final time against Jackson’s remaining men in the grave-yard with broken hands, it seems that he would meet his inevitable death. But he remains ever confident and finds a way out in an ingenious manner.

Another character that stood out for me was Jackson. His introduction is one of the best villain introductions in Spaghetti Westerns, him murdering a bunch of Mexicans by using them as target practice for his men. His men are said to have little regard for anyone who are not ‘Southern’ and ‘pale-skinned’. His hypocrisy is also shown by the fact that he thinks of Mexicans as inferiors but at the same time collaborates with the Mexican army to keep his gold. He appears at only strategic points and is not over the top like some other Spaghetti Western villains but still manages to leave an impact on the viewers. 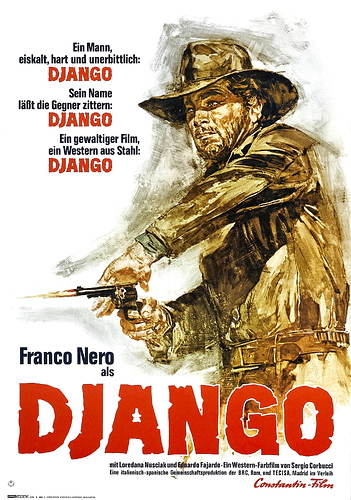 Sergio Corbucci is said to have grown as a director both in experience and stature after Django and in my opinion, he went one step ahead in his next venture, perhaps one of the greatest Spaghetti Westerns of all time The Great Silence. Django was a focussed venture and did well by looking at primarily on the protagonist’s actions and the terrain around him.

Talking about the terrain mud forms a primary focus of the movie. Django starts the movie dragging his coffin in a mud and dirt filled stretch, the quicksand forms an important element in the story, even the final graveyard sequence has Django drenched in mud by the time he is done. The presence of dirt and mud helps create an imagery of mess and trouble, one which is near impossible to clean but definitely one which can be steered out of with some help.

The women in the movie comprise of Maria and other women who fill in the saloon in the deserted town visited by Django. As was seen in The Great Silence as well, Corbucci gives his female characters a voice, even in a world which is built inherently against them. Squeezed between the Mexicans and the red klansmen, they are seen taking sides at certain points in the movie. Maria herself though in love with Django is shown to be able to fend for herself, even assists him by shooting down two intruders during the escape sequence.

Jackson’s men are shown as being repressive towards everyone who doesn’t follow their suit, the Mexicans even though oppressed by Jackson are oppressors themselves (Brother Jonathon’s brutal fate, their control over women are examples) who are perhaps meant to fight another battle (in Mexico) but here to save themselves from the wrath of Mexican army. Nathaniel and the Women, though oppressed by both and being forced to pay security amount to Jackson’s group also take sides with some chiding Maria for bringing in Django, another a Mexican prostitute suggests taking help of Mexicans to fend off Jackson. There seems to be a loyalty of fear in practice among Nathaniel and the women.

Django who helps out the women and is ready to ally with Mexicans, has his eyes set mainly on the gold.

Thus, Corbucci manages to create a world where there is no one right or perfect side. In a system where resources (the gun, the services of prostitutes or Django’s labour) are sought after, in a land where there is no law and order, it becomes natural for the parties to focus on gold- For Jackson to keep it for himself even after having lost the war and for Django and Mexicans to seek it for their own benefits. When the victorious Mexicans return to the town, the prostitutes join in the celebration, enamoured by the power of gold and muscle of men who hold it presently.

To look at the theme music, it fills in the muddy landscape that Django is walking on with his coffin. The English lyrics talk about loss of a loved one, a tough phase through life of the protagonist but he would soon overcome the same. I don’t know why but as with all of the voice-acting in this movie, the English version of the song didn’t sit quite well with me. I actually adore and listen from time to time to the Italian version sung by Robert Fia (though I don’t understand the language), which mixes the anguish, pain and loneliness of Django quite well. It also manages to become an uplifting one towards the end, signalling that there is hope yet for Django.

It was also the first place I heard the bandit theme which generally accompanies the Mexican bandits. ( A Bullet for the General with music by Bacalov also has the same theme) But here it is not over-used and doesn’t come across as irritating.

A few misses for me in the movie were: An interesting character, the scar-faced Ringo is killed off too early (as in several westerns), actually reminds me of the killing of Klaus Kinski’s character in For a Few dollars more who I think could have added more to the movie. There are some sequences where the acting felt over the top, while it was necessary to a point with the Saloon sequences, they could have put a hold to it.

And finally, there is the completely unnecessary mud-fight sequence between the women. Perhaps it was part of Corbucci’s black humour. (like the way he made Franco Nero drag the coffin endlessly and then left him)

I don’t need to say anything as to the appeal of this movie other than what has been said by Franco Nero himself “The world is made up of workers and workers would love to be Django.” They would love to tell their bosses that things would change from now on.

The quotes from Franco Nero from this article are available on ‘Franco Nero: No escaping Django’ by Phelim O’ Neill available at https://www.theguardian.com/film/2011/may/26/franco-nero-django

Interesting take on the movie, @Divy . Thanks also for kicking off our blog in here. Curious to hear what others think of your analysis.

Thanks @Admin
Would love to know how people liked it and what their thoughts, opinions are regarding the movie.

Great review of maybe the most important movie in the genre, a true masterpiece of spaghetti and perhaps IMO the true genesis of it, Leone was a breed apart, an artist of cinema (the greatest IMO) but Corbucci’s gritty, dirty and violent approach was more easily imitated…Django is top five in my top ten of spaghetti

@Popsjnr That’s actually a pretty great point regarding it being the go to point for several of the later directors. Leone’s grand style of making westerns (best shown in his mammoth epic The good, The bad…) would not have fit the purse of many of the later producers who would’ve wanted to cash in on the genre’s success.