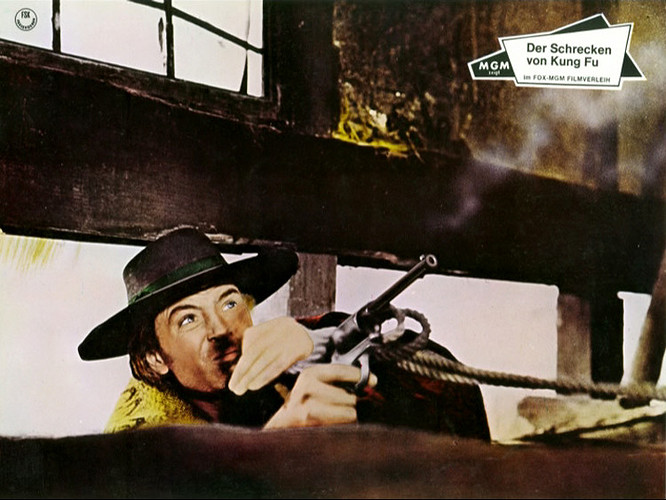 “My uncle’s a missionary.
He saves pretty young women from sin.
He’ll save you a blond for $5 dollars.
Oh see how the money rolls in!”

THE SILENT STRANGER is my favorite of the films in “The Stranger” series, and perhaps my fave of all of the Tony Anthony films that I’ve seen to date. The third of the four “Stranger” outings, it may not be stranger than GET MEAN, but if not, it’s awfully darned close. As in GET MEAN, “The Stranger” (Tony Anthony) finds himself in the middle of warring clans. This time, rather than seemingly having travelled back in time to Spain to battle Barbarians and Moors, he’s in 1884 Japan battling Samurai and - briefly - a few ninja. In fact, the title I had previously known this film as was THE STRANGER IN JAPAN, though it is now my understanding that it was never officially released with that title. Instead, it was shelved for years (reportedly due to a personal feud between producer Allen Klein and the then-president of MGM) and ultimately released as THE SILENT STRANGER with a rumored 15 minutes removed, and a voiceover reluctantly added by Anthony to fill in the gaps. Sadly, the German dvd version I watched (misleadingly titled DER SCHRECKEN VON KUNG FU) also presented the film in the boxy old school console TV aspect ratio, rather than widescreen (though, as if the toss salt into our wounds, a widescreen trailer is included on the disc as an extra). 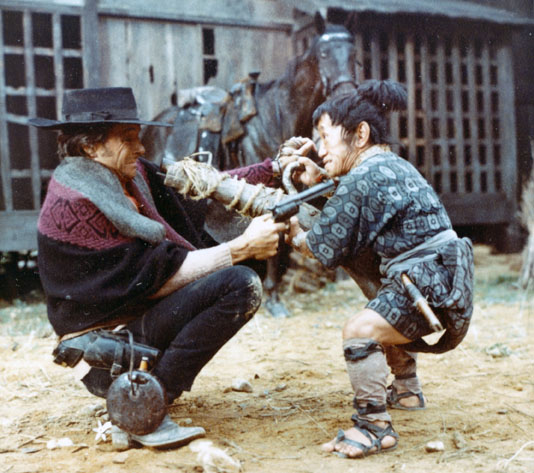 Still, despite all this, the film remains fascinating. Unlike other Spaghetti Eastern’s I’ve seen, this one plays less like a Western with an Asian gimmick, and more like a Samurai flick with a Cowboy gimmick. And now that I think of it, that might actually make this an easier film for Samurai fans to appreciate than Western fans.

The movie opens with The Stranger running through the snow in the Klondike calling out for “Pussy! Pussy! Pussy!” Of course, “Pussy” is his horse’s name. He then stumbles on a cabin where he finds a Japanese man being stripped nearly naked by three hombres. With the exception of Anthony, and a character played by the reliable Lloyd Battista, you will see no further Caucasian faces in this film. Nor will you hear much more English, as the setting quickly changes to Japan where THE BULK OF THE FILM IS COMPRISED OF UNSUBTITLED JAPANESE. You see, The Stranger truly is a stranger here. He understands nothing of what he hears and little of what he observes. He only understands that he needs to get paid for the errand he has undertaken, and that without a common language, nobody can fully be trusted. Beyond that, he also understands that the three young women who attack him with knives inside a steam-filled bathhouse, do not mean him well. Nor does the grotesque dwarf with the hardened face who literally sits in the lap of a brutal warlord. 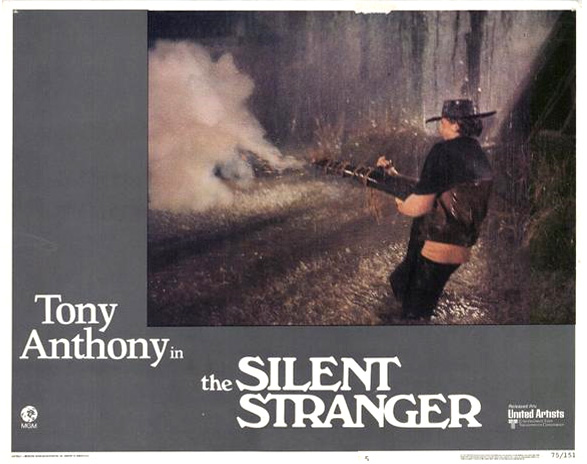 Stelvio Cipriani provides the score, as he did for THE STRANGER RETURNS and BLINDMAN, but here his score is darker, dissonant, disjointed and even avant-garde at times. During one sequence, the music is accented by a scissoring sound not unlike the sharpening of knives. The only other music in the film I can recall, is the dirty little ditty sung by The Stranger that I placed at the top of this review.

This looks interesting , not seen before ,I’ll look for it today ! . Nice review.