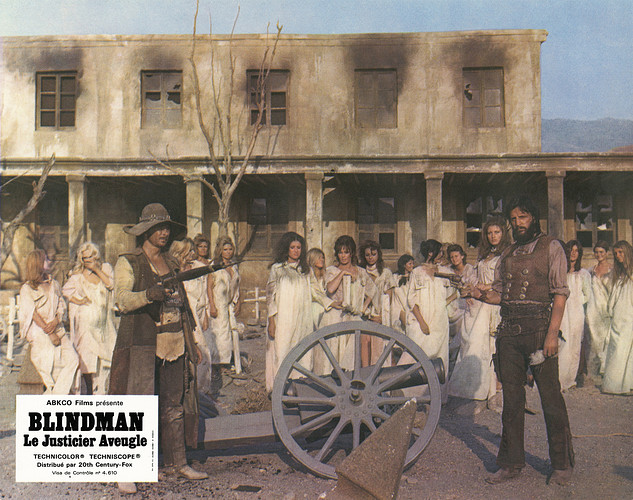 They offered to toss the blindman some copper. He gave them an ass full of lead.

“Give me my 50 women,” insists the blind gunslinger (Tony Anthony), time and time again. He had a $50K contract to deliver 50 mail order brides to the mining town of Lost Creek, Texas, yet whenever he thinks he on his way to fulfilling his contract, his blindness is taken advantage of. Those who cross him will be made to pay dearly, however.

The first time he is double-crossed actually occurs before the start of the film and the culprits are his partners, Skunk, Limey and Honey. We meet them only briefly, and never learn how they outfoxed the blind man, but we do learn that they decided to turn the women over to Mexican bandits, rather than deliver them to the miners. Interestingly, Limey and Honey are played by Allen Klein (manager to both the Beatles and the Rolling Stones) and Mal Evans (Beatles’ personal assistant, roadie, bodyguard, and occasional collaborator/technician). They are introduced asleep in bed with the same woman, something that’s not hard to image they might have experienced along with the Beatles in real life. Klein also served as Anthony’s manager and he produced BLINDMAN (as well as several of Anthony’s other films).

Among this movies co-stars is Ringo “Thomas the Tank Engine” Starr. He plays the ill-tempered “Candy,” perhaps a reference to the Christian Marquand film that Starr also played a part in. Or perhaps not. In any case, I don’t think Starr has ever been better in a dramatic role and it is not all that hard to forget that he was a major rock star.

Looking more like rockstars than Starr, incidentally, are several members of the gang that Candy and his brother Domingo (Lloyd Battista) rule over. Among them is a character rather awkwardly called “Dude,” and if there’s one actor who’s appearance threatens to pull viewers out of the film, it’s him, as he’s totally Hair Metal. 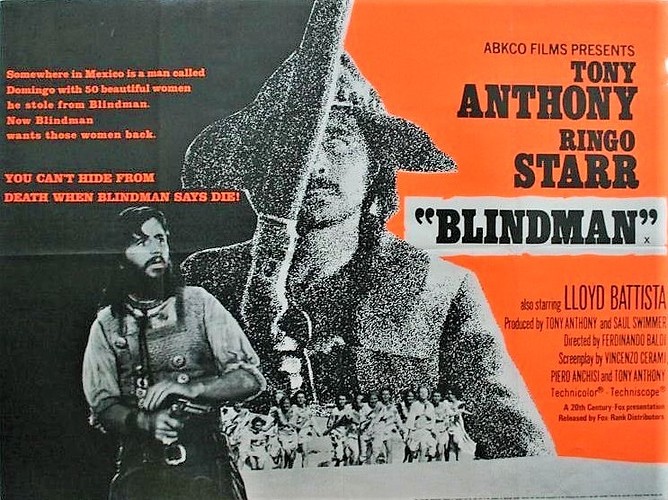 Many have noted that the blind gunslinger conceit appears to have been inspired by Japan’s blind swordsman, Zatoichi. Anthony’s portrayal of the blindman is unlike Shintarô Katsu’s portrayal of Zatoichi, however. He’s more impish, making sly jokes at every turn. And there’s perhaps also a bit of Charles Bronson in his blindman.

The Zatoichj film that BLINDMAN appears to have taken the most inspiration from is the 5th of the 26 films in the series, ZATOICHI ON THE ROAD. In “Road,” the blind swordsman is tasked with safely escorting a wronged woman 200 miles across the width of Japan, only to discover that he will be opposed by two separate gangs who have other plans for her.

And indeed, there is also a 2nd gang in BLINDMAN, a Mexican military battalion led by a vulgar, aggressively-friendly General played comically and effectively broad by Raf Baldassarre. 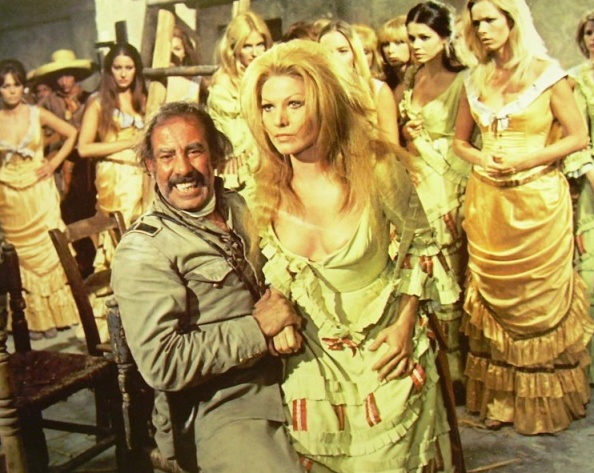 As for Anthony, he’s fine as the blind gunslinger who gets by with a little help from his friends. And his seeing-eye horse. The horse expertly nudges his arm to help perfect his aim in one scene, and in another, he takes directions to Mexico from a desert shepherd.

Sadly, Anthony’s quips miss more often than they hit. The fault lies partially with the script, but Anthony’s poorly timed, flat delivery is equally at fault. That said, he is otherwise good in the role, though I’m not sure I would recommend this film to someone who hasn’t seen him previously in other roles. The film is certainly entertaining, however, and though it lacks the political content of many of the better Spaghetti Westerns, it’s still a fun flick, even if most of the women serve as little more than - sometimes naked - window dressing. And, oh, also victims of violence at the hands of men (one woman - a villain - actually has her neck snapped).