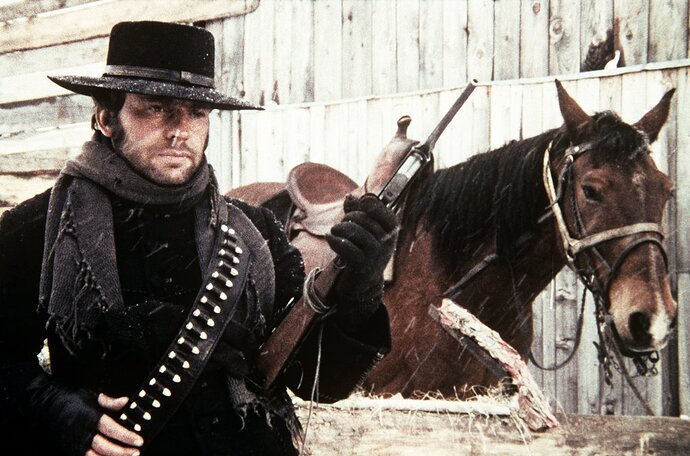 If you seek orientation or need to prioritize, these are the five essential spaghetti westerns that aren’t one of Sergio Leone’s that we think every fan should own on BluRay: 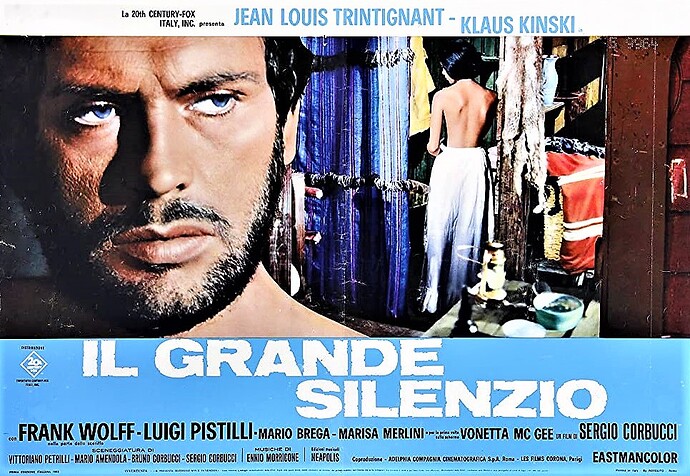 Sergio Corbucci’s masterpiece is a bleak and out of the ordinary entry in the genre that arrived on HD format relatively late, but is now available on both sides of the Atlantic. If you only get one, get this one. The star, Jean-Louis Trinignant, unfortunately passed away just a few days ago. In France, there is even a 4K UltraHD disc available. 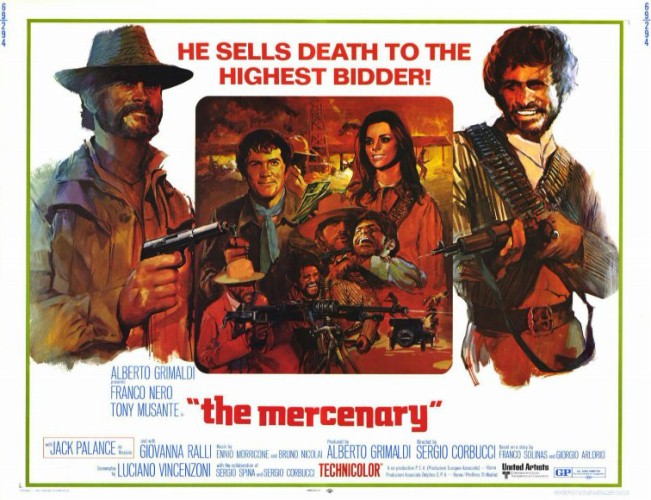 A particular fan favorite, this one is epic on many scales and possibly the most extravagant buddy-duo in a revolution movie, with more showdowns than you can count and a fantastic score by Ennio Morricone. To me, also the best showdown. 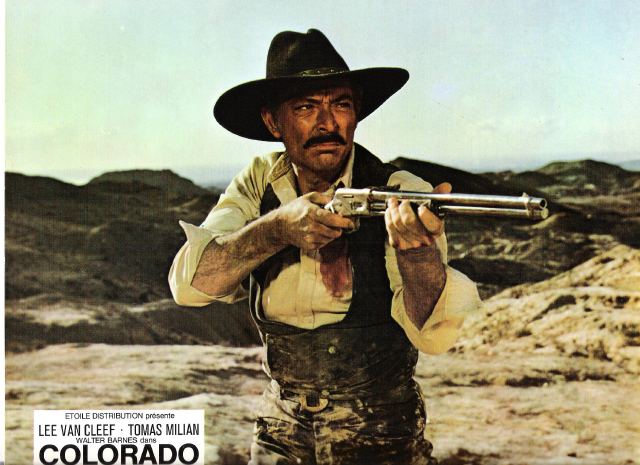 With arguably the greatest opening title song ever (how was she never hired to do a Bond song?), this cat and mouse game between van Cleef and Milian is the quintessential spaghetti western, and BluRays are your chance at finally seeing an uncut version of this movie that’s got more substance than your teenage self remembers. Rumor has it that there will be a UK release soon, too. 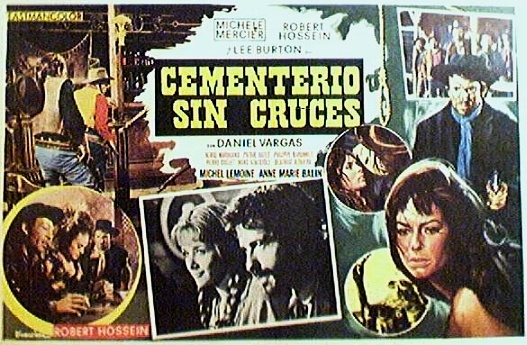 To some, this ranks among the very best, and I am cheating because Leone shot at least one small scene in it. Hossein’s archetypical and sinister film embodies much of what made the genre successful, if you like the gritty kind. Interestingly, even though a French director and co-production, it is not yet available in France. 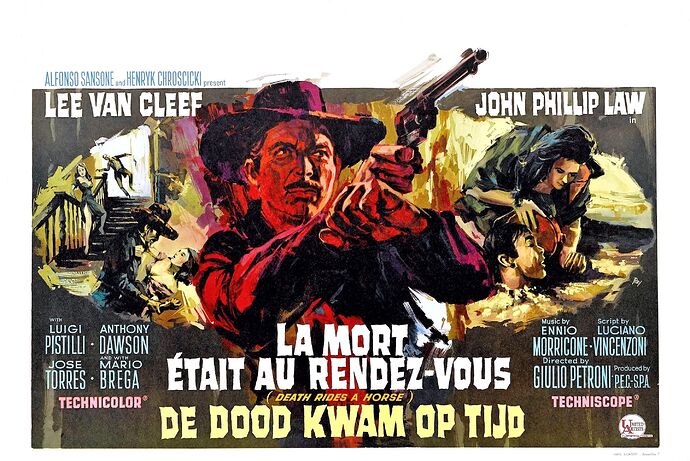 This is controversial. I originally opted for Django (and by all means, you should own that one as well), but there’s already so much of Sergio Corbucci, so to diversify a bit, get this Petroni-directed classic. As far as revenge movies go, this is a hit.

What do you think? Would you have picked differently? Which ones are still missing from your collection and which editions did you get? Comment below

Hah, well, yes, Django is indeed absolutely essential for the genre, and Corbucci was next to Leone the director who defined the genre the most regarding style and content. So it would be for me more than consequent to name his 3 most important westerns in such a short list.

While Death Rides a Horse is imo just another Spag using the things others created, and not in a too remarkable way. There are several others of the genre’s “usual suspects” I would easily chose before thinking about Death Rides a Horse.

I would replace The mercenary with Quien Sabe as this was the first Zapata western, and a great one.
The mercenary is enjoyable and the Arena shoot-out is one of my favorites but in my humble opinion Quien Sabe is the better of both.

We will always disagree on which is the better movie, for this reason and that, … but I think this top 5 is a very good representation of films that ooze ‘Spagginess’ , Over the top rousing Morricone/Nicolai music, snarling ugly villains, bleak but beautiful vistas … and that’s what it’s all about for me

Hey Aldo,
Yep, it is a matter of taste. But Quien Sabe was the first Zapata spag. Therewith for me it is more a landmark and deseves it place in the list. But the lit is fine with me as it is now. Just answering which I would pick differently

I agree with a good chunk of the list @Admin, solid starting points after seeing the Leone films.

Well, Sebastian, why not make it six?

Then the Django problem could be solved, and we get a half a dirty dozen …

x = although some visible Leone involvement

Well we have a top 20, I just wanted to get a little discussion going and inspire some newbies

but I consider Django a lesser movie than the others I picked, it’s just more famous

My top five on blu would be:

Yes, I realize mine looks a bit different from others but differing tastes and all.

AND the moment we finally get a blu-ray of The Forgotten Pistolero, Ringo will sadly leave my list.

See, one reason I wouldn’t include these is, that my list was meant to focus on both films and BluRay but Vengeance is pratically unavailable on BluRay and Oggi a Me unavailable unless you’re a German speaker… don’t even think the scandinavian disc has English audio? This brings up the question: Wild East at some point intended to release this?

don’t even think the scandinavian disc has English audio?

It has. Database had wrong info but I corrected it now.

Shoot the Living and Pray for the Dead would be in my Top 5.

Wild East at some point intended to release this?

From what I could gather, it was almost a certainty at one point. I can’t say what happened, but I suspect they ran into the same issues that plagued them with other releases in the later stages of their business.

my list was meant to focus on both films and BluRay

I just assumed that it meant that the title had to have a blu release to be included. Sorry about that. At the time I purchased Vengeance though, it was readily available. I purchased it off Amazon even at what I thought at the time was a very reasonable price.

Not that he needs my support, but @Bill_san_Antonio is correct. The Scandanavian disc does indeed have English audio.

oh snap, just realised this one is now quite oop and not as cheap to get as the DVD which I still have thinking I had the Bluray…

I see good prices at Amazon UK and FR

UK starts at 10 quid, France at 7 euros… that’s ok, but I was hoping to spend even less on a used old Bluray

I’d have definitely swapped out Death Rides a Horse for Django Kill, and I might possibly have swapped out Cemetery Without Crosses for Requiescant.

A good list, which is pretty much representative of the genre. However, although 'Cemetery without Crosses’ is a stand-out Spag, I’d change it for either ‘A Pistol for Ringo’, or ‘The Return of Ringo’ - both excellent Giuliano Gemma classics.

And, as far as a rollicking good Spag is concerned, I would be tempted to sneak ‘Sabata’ in there, which would cater for the gadget-laden phase of the genre which also included ‘Sartana’ and his deadly organ…

Great list. I’d probably replace Death Rides a Horse with Day of Anger because I think it’s the better film that shares a similar theme, but apart from that this would probably be the five I’d tell people to watch if they were just getting into the genre and wanting to see what it’s capable of.

but I consider Django a lesser movie than the others I picked, it’s just more famous