Every Spain western from that time is a true Spag.

Or is there another reason why Cut-throats nine is labeled as a Eurowestern?

The fact is that Condenados a vivir was never released in Italy and never dubbed into Italian, remaining unknown to the audience: consequently it is classified, in my view rightly, as Eurowestern.

Every Italian or Spain western from those years is automatically a Spag.

Euro Westerns come from Germany, England and other countries, and they have a different style than the usual Spag.

That’s why Une Corde un Colt is also a Spag, despite made by Frenchies, because it hast the Spaggie style.

Thank you Stanton, so its ok to put this in my offical top 20 or alternative top 20?

That’s why Une Corde un Colt is also a Spag, despite made by Frenchies, because it hast the Spaggie style.

But in Une corde, un colt there are both the typical style and not insignificant Italian participation (Vargas, Lee Burton, Staccioli and Benito Stefanelli as actor and fight arranger/stunt coordinator); Condenados a vivir, in contrast, further to the previous point is a rather atypical western. 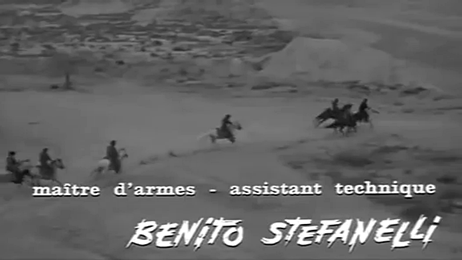 Thank you Stanton, so its ok to put this in my offical top 20 or alternative top 20?

Yes, others voted for it already several times.

Jonathan, I don’t make a distinction between Spanish and Italian westerns. Both are Spags for me, even if they don’t have any typical SW ingredients.

Yes, others voted for it already several times.

YES! this film is going into my alternative top 20 for sure.

Recently watched the english bluray version!
What a crazy and brutally western!!!
Really surprised me.

[SPOILERS AHEAD:] I too think @davidgregorybell’s essay is great, but don’t quite agree that the film “does nothing with … the classic revenge thread”. Brown has a single killer in his sights, but - and I see this as one of its most effective features - the film gradually discloses that most, perhaps all of the seven prisoners took part in the murder. (Please correct me if I’m wrong!) The flashbacks recur to a scene of men drawing lots, in which we see Joe, Bob, and Ray appear at various points, and which Slim seems to remember in his last moments. In the very last flashback of all, we watch Dean pick the “long straw". It’s only now that we can at last put the back-story together: the draw was to decide who would kill Brown’s wife, and Dean did it. It’s not clear, to me anyway, whether the Dean of Manuel Tejada (who died only last year) stabs her with cold-eyed relish or with disquiet; that said, I think the ambiguity is intended. In the same way he has, we later learn, selfish as well as selfless motives for showing kindness to Kathy (“In me you saw only the possibility of a way out,” she says). While Brown seeks one culprit, we come to know that the murderer was arbitrarily picked from a group, any one of whom would surely have been equally delighted to do the job.

“As every legal system is there to prove,” writes Adam Phillips, “revenge is one way of putting order – patterns of reassuring or inspiring meaning – back into the world, of restoring intelligibility. Justice is our revenge on the arbitrary.” But revenge can’t restore intelligibility to the world without recognition, and in the nihilistic chaos viewers accurately note in Cut-throats 9, everyone is flying blind. Just as Brown, once dead, doesn’t lie down (or hang seared) but returns in Ray’s delirium, so the momentum towards revenge that Brown kick-started doesn’t die with him, but returns in scattered, dispersed form, played out in a sequence of deadpan and finally deadly ironies that no-one could anticipate. In fact it’s more effective than Brown’s man-to-man, face-to-face revenge design could ever have been, as the survivors, like the three men in Chaucer’s Pardoner’s Tale, start to pick one another off. The revolting “Weasel”, Kathy’s most brutal rapist, is chivalrously (!!) strangled by Dean as payback for her trauma. Ray “the Torch” runs off with the provisions, and dies fighting Buddy’s bandits. And, most ironic of sucker-punches, “revenge” does eventually reach the man who used the knife, but in a weirdly abstract, skewed way: the mother’s murderer dies because he defends the daughter. Ouch.

The idea that “revenge” has become a name not for order but for contingency at its dumbest is most powerfully embodied in Kathy’s final moments, and cruelly punctures the transformation from victim to agent we’ve seen her undergo. Around the film’s halfway mark she appears paralysed by versions of masculine violence - uneasy with her father’s vendetta, which brings him closer to the thugs than he believes (“I know what you’re capable of”), then brutally raped by those very thugs and forced to watch her father tortured. From then on, however, she’s the conscious avenger of her own abuse and suffering, held back from suicide only by the wish “to see you all dead”. Some of this she accomplishes by her mere presence; she, not the flashes of greed and golden chains, activates the men’s rivalrous desires sufficiently to bring about two deaths. It is, however, an active, despairing death-wish that finally has her blowing up herself, the last two “cut-throats” and an assortment of dead-drunk soldiers. (I’ve wondered whether this explains the screwy English title: perhaps we’re meant to see that circumstances have turned Brown and even Kathy into cut-throats. Certainly a larger suspect pool has to be good box-office for a whodunnit.) Her last tie to life (“It’s all we’ve got” - “It’s not much, is it?”) was residual, maimed affection for her suitor-protector Dean, and once he’s dead that too is off the table. As Dean dies, we see what she can’t – the “cuts” (that old pun) to the past that show him slashing her mother’s stomach wall. No matter. Unknowing like her father, she tenderly strokes his cheek, then lights the dynamite, which as she walks around Dean’s body takes on the aspect of a funeral candle. Kevin Grant nicely refers to the explosion as a form of “purgation”; it’s also - another irony that subtlety would ruin - a mourning rite, a farewell to the guy who gutted her mother. Since she doesn’t know that, there’s no hint here of recognition (anagnorisis), and therefore no revenge. All there is is the farm going up.

Thanks for the feedback, Gary (nice handle, by the way - tell me, is that in specific reference to Steffen in Stranger in Paso Bravo or Kinski in And God Said to Cain?), and for such an interesting, detailed and articulate (re)interpretation of the revenge theme inherent in the film. (I thought I had brass balls comparing Corbucci’s western films to the so-called ‘malaise’ phase of Antonioni’s cinema in a previous article, but then you go and draw a (very credible) correlation between Cut-Throats Nine and Geoffrey Chaucer. Excellent stuff!) Your meticulous deconstruction of the revenge theme is fascinating, and I actually like (and support) your posited theory that Brown’s revenge doesn’t necessarily perish with him, but that his death might actually be the catalyst for what you refer to as a “dispersed” form of ecumenical justice. When I said that Marchent’s film did “nothing with the classic revenge thread”, I was referring more to the absence of a base and primitive resolve. As much as I like to deep-dive and analyse these films in exhaustive fashion (maybe too exhaustive, I know - such is my love for these films that I tend to drone on and on, as I’m sure many SWDB readers will surely attest), and as much as I appreciate and laud their ethical ambiguity (rampant, as you say, in Cut-Throats), I have to admit that I sometimes - not often, but sometimes - crave a good old-fashioned dénouement, one in which a score is settled via a primal, recognizable and satisfactory coda. This is one of those rare films/instances. Such is the overt loathsome nature of the Cut-Throats chain gang, and the suffocating nihilism of the film as a whole, I would have liked to have seen Brown survive his ordeal and settle his blood debt via some standard (clichéd, even) gunplay. Maybe this is a woefully biased viewpoint, given that I’m a huge fan of Robert Hundar (to the point of it tainting my critical reading or general appreciation of the film), but I’d kill to see that kind of alternative, action-based resolution. So, whilst your expert reading of a domino effect form of justice being executed is absolutely on point, and one I readily subscribe to, I’m afraid that the unabashed western fan in me desperately wants to see Hundar face those unrepentant Cut-Throat scumbags in some form of recognizable showdown, and have him plant a few bullets in them. But again, thank you for your highly considered and welcome response. I haven’t watched that film in over a year now, since I last viewed it for that particular article, but you’ve put me in the mood for a re-watch. And you’ve finally got me onto the forums, Gary, which I’ve been meaning to do for some four years now, so I owe you one, partner.

Excellent review. As you say, it has a put on nihilism and gloomy atmosphere reminiscent of the crime films of the overrated Fernando di Leo.