Watched this one again last night, and was going to write a review - but there’s already a good one on the Fistful of Pasta site which can be reached from the database link above.

So - in a nutshell - it’s a reasonable yarn, a bit different in that it’s a bit of a revenge story crossed with a hunt for a diamond encrusted tiara that belonged to the local’s statue of the Madonna.
What still mildly annoyed me this time around though, was that Sancho’s gang massacre a bunch of monks and there seems to be no problem with that - until the avenging Angel’s (that’s his name) monk brother turns up at the monastry. The gang put on a pretence to the point of one of 'em dressing as a monk to try to allay his suspicions, instead of just plugging him like the others. When he finally rumbles 'em and pays the price, Sancho shoots his own man blathering about bad luck that will now befall them. Strangely, he didn’t seem too bothered about the other brothers! ???

As expected though, we get Sancho (played by Sancho) doing his stab style shooting, we get a double-crossing filly shared between him and the avenger, and who gets involved in a reasonable enough catfight (as mentioned and illustrated on the dedicated ‘Catfight’ thread). These are all plus points but…

… only half marks overall …

maybe because the version I watched was a pretty ropey fullscreen vid copy with some sort of subs on, which didn’t help much.

Watched it for the first time and there’s nothing special about this spagh. It’s below average at best, it could have been a lot better if it had a decent budget. F.Shancho is the only good thing in this, doing his usual schtick as a baddie. 2/5

Can’t believe I wasted my time with this shit. Another one of those crap Capuano adventure films. Apart from the setting, they’re all the same, aren’t they?
3,5/10

The guy near Salvatore Campochiaro is Sergio Scarchilli (credited, unlike Sandro), and Angel Face is Joaquín Blanco.

Pedro and Rosita are Francesco Porzi, a young playboy from Latina who died in August 1970 in a car crash at age 23 (a few days after Soledad Miranda), and Mara Vittoria Solinas, sister of Marisa.

Arnaldo De Angelis is the bartender and Yuma Gonzales the dancer. Also with Rinaldo Zamperla, Clemente, Franco and Giancarlo Ukmar.

Silvano Zuddas merits further examination, because the moustached Sancho bandit is not the same guy who plays Cordero’s lieutenant in Bury Them Deep from the same year. Unfortunately at the moment I can’t check Gun Shy Piluk.

Cordero’s lieutenant in Bury Them Deep 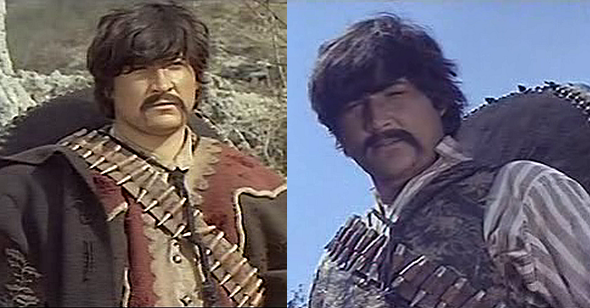 One of the Mason brothers, Wyatt

Silvano Zuddas merits further examination, because the moustached Sancho bandit is not the same guy 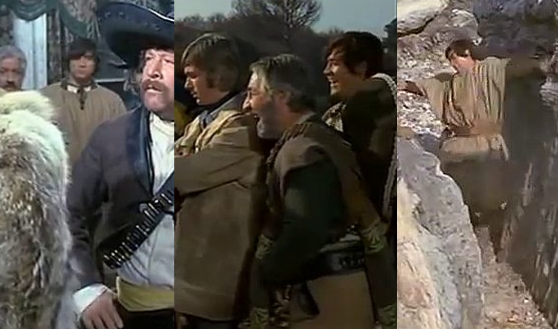 Maybe he’s Jose who Fernando sends into the cliff path and is shot. He gets no close-ups, is always in the background, so is hard to confirm, but is named and has the same hair :). Possible?

More than possible Carlos, I think that’s him. Thanks a lot!