Any Gun Can Play: The Essential Guide to Euro-Westerns (Kevin Grant) 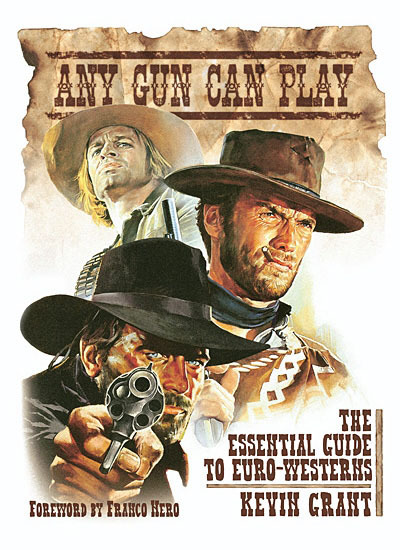 New paperback book coming from Fab Press which also have given us the A Violent Professional discussing the films of Lucinao Rossi now comes with a book taking on the spaghetti western genre.

Written by a Kevin Grant and with a foreword by none other than Franco Nero !

Apparently set for a May 2010 release. Read more here:

I’ve just been on pre-cert, was gonna come on here to announce it but soren beat me to it.

Anyway, this is what i pasted from there:

Here’s the cover design and further details about Any Gun Can Play, a great new book coming soon from FAB Press by Kevin Grant.

THE EURO-WESTERN BEYOND LEONE

The success of Sergio Leone’s ‘Dollars’ trilogy in the '60s sparked a gold rush, as a legion of European film-makers - many of them sharing the get-rich-quick mentality of Leone’s mercenary anti-heroes - followed the master’s lead to create some of the wildest Westerns ever made.

Cynical and stylish, bloody and baroque, Euro-Westerns replaced straight-shooting sheriffs and courageous cowboys with amoral adventurers, whose murderous methods would shock the heroes of Hollywood Westerns. These films became box-office sensations around the world, and their influence can still be felt today.

Any Gun Can Play puts the phenomenon into perspective, exploring the films’ wider reaches, their recurrent themes, characters, quirks and motifs. It examines Euro-Westerns in relation to their American ancestors and the mechanics of the Italian popular film industry, and spotlights the unsung actors, directors and other artists who subverted the ‘code’ of the Western and dragged it into the modern age.

Based on years of research backed up by interviews with many of the genre’s leading lights, including actors Franco Nero, Giuliano Gemma and Gianni Garko, writer Sergio Donati, and directors Sergio Sollima and Giuliano Carnimeo, Any Gun Can Play will satisfy both connoisseurs and the curious.

Complete with a foreword by Euro-Western legend Franco Nero, this stunningly illustrated reference guide takes aim at the lingering notion that the genre has little to offer beyond the ‘Dollars’ films and a fistful of others, exposing the full, vibrant history of the Euro-Western.

I’ve just been on pre-cert, was gonna come on here to announce it but soren beat me to it.

[quote=“Søren, post:3, topic:2193”]Sorry amigo… Just saw the news on lovelockandload :)[/quote]No need to apologise, it’s good that you thought of it aswell

Funny enough i went on there after here to say so but Marc had already done it ;D

New paperback book coming from Fab Press which also have given us the A Violent Professional discussing the films of Lucinao Rossi now comes with a book taking on the spaghetti western genre.

Luciano Rossi has a book written about him? I didn’t know he was that big of a star!

Luciano Rossi has a book written about him? I didn’t know he was that big of a star!

To some he is

A small 128 page paperback book with a review for each of Rossi’s movies aswell as discussing his role in the film. Written by a female fan so reads much the same as if I would have written a book about Edwige Fenech

You guys beat me to the punch. Tell your friends, tell your neighbours…

[quote=“Søren, post:8, topic:2193”]If they are signed by Franco Nero I would certainly want one :)[/quote]If anything it will be by the author

If anything it will be by the author

Wouldn’t matter to me then. Don’t know this Kevin Grant-person and don’t want him writing all over my book

Not that I think I’m going to buy the book. Have enough books on the genre and if I buy another one its gonna be another reference book if and when a usable one appears.

another reference book if and when a usable one appears.

What I wish for.

Fab press books are usually well researched, i for one am looking forward to it.

Interesting book about Rossi. Thanks for the info Soren. The author is a fellow canadian! If Rossi gets his own book than I can’t wait for the books on Horst Frank, Arturo Dominici, Fernando Sancho etc…

Both books might be interesting. But I have to agree, a book about Rossi kills me. I loved him in Django the Bastard.

The author is a fellow canadian!

[quote=“Yodlaf Peterson, post:12, topic:2193”]Fab press books are usually well researched, i for one am looking forward to it.[/quote]they are. i have a few of their books including the Mario Bava oneand i’ll be getting this one as well.

Kevin Grant used to contribute to the fanzine “Blood, Money and Vengeance.” He knows what he’s talking about.

Not sure we need another history of/guide to the genre, though.

Fab press books are usually well researched, i for one am looking forward to it.

Likewise!
I love Mark Schilling’s “No Borders No Limits” book about Nikkatsu Action films that FAB Press released (as well as the aforementioned book on Rossi). I hope this one keeps to their standard.

There will be signed and numbered limited editions signed by Kevin Grant and Franco Nero!

What are the usual price for these signature editions, Yodlaf?