I just rewatched this one, via the NEW DVD (and very nice it looks, too).

I don’t have much to add to Scherp’s typically insightful review, but I enjoyed the film more this time round than when I first watched it, no doubt helped by the enhanced presentation.

For a 1967 production, it is remarkably traditional and tame - yes, the beatings are occasionally savage, but ultimately even the main villains are spared death. Serge Marquand is ridiculed rather than riddled with bullets, and Daniele Vargas disarmed by a woman.

Of course, this lightness of tone, relatively speaking, helps to unite it with Adios Gringo and One Silver Dollar, but they were made two years earlier. The complexion of the Euro-Western as a whole had changed considerably in the meantime, but you would never guess that from the evidence here.

The direction is mediocre, but Gemma is solid, the location work is fine, there are a few pleasing gimmicks (I liked the modified branding irons that facilitate Vargas’s rustling racket), and, of course, Nello Pazzafini’s cameo is a delight.

The much-feared Mexican bandit gang, though, is an embarrassment. They make a very poor show of themselves. Fernando Sancho would be disgusted with them.

It was released in Argentina in VHS.
Here is a scan of the cover: 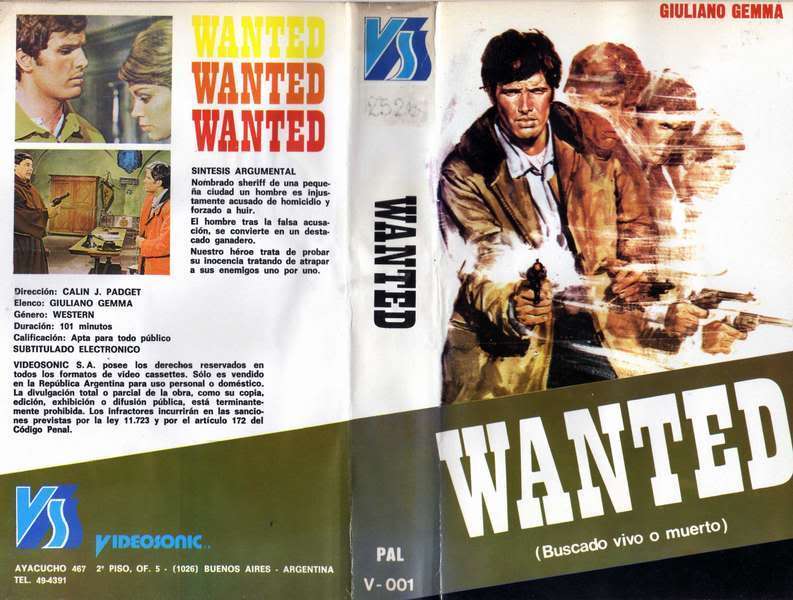 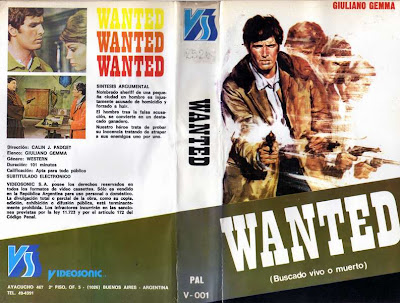 But the artwork on covers were mostly better in those days. Dvd artwork nowadays looks always the same with photos which have “too much photoshop” if you know what I mean. Spaghetti covers have been quite good looking fortunately, WE releases for example with their original poster art.

btw, this reminded me of my old topic of worst covers
http://www.spaghetti-western.net/forum/index.php/topic,1409.0.html

[quote=“Bill san Antonio, post:26, topic:1186”]But the artwork on covers were mostly better in those days. Dvd artwork nowadays looks always the same with photos which have “too much photoshop” if you know what I mean. Spaghetti covers have been quite good looking fortunately, WE releases for example with their original poster art.

btw, this reminded me of my old topic of worst covers
http://www.spaghetti-western.net/forum/index.php/topic,1409.0.html[/quote]

Agree, the old style was much more appealing.

[quote=“sartana1968, post:28, topic:1186”]many old vhs promise a lot to the fans with good pics but when you take the movie and
see t it looks much diferrent than the cover ;)[/quote]

Which means that their artwork worked. This doesn’t happen nowadays, too much photoshop…

Which means that their artwork worked. This doesn’t happen nowadays, too much photoshop…

I’ve just watched this and ejoyed it quite a bit for being such a classic kind of western. I think I like these naive Gemma movies more for a nostalgic reason than the movie’s own merits. They remind me of the cowboy comic books I used to enjoy when I was a kid and if I had seen these movies back then they would’ve been absolute favorites of mine and Gemma would’ve been my idol. I can totally understand those who get bored and disappointed with these since they’re quite different to the dirty and mean SW we all love, but I still can enjoy them.

An odd film in many ways and somewhat underwhelming but certainly watchable. In some ways a bit like a Fidani film but with money and class!

Could do a review for the site if the site is interested?

There are better SWs, even among the “naive” ones, yet I agree it is worth seeing. Speaking for myself, a review would be welcome.

Is the New Entertainment DVD better than Wild East?

I finally had a moment to watch this, and what can I say? I fell in love with the genre all over again. Gary Ryan (played by Guilano Gemma of course) is a mean but fair and newly sworn in sheriff (I swear no one can play the " bring them to justice" type of cowboy like Gemma, and this film is proof) who ends up being framed for murder. A simple, effective, story that reminds me of an old American 50’s western. Not to mention that the film has twist or two, a bit of romance, in the end is about overcoming adversity under any circumstance. Serge Marquand is wonderful as Fred Lloyd, a power hungry villain, who steals, lies, and kills. He’s somewhat haunting looking in this film, which only adds to his wickedness. Also a quick note, Teresa Gimpera ( as Evelyn) is simply, beautiful, and adds a nice touch to the film’s ending. Not many flaws here, and should please any Gemma fan, and most spaghetti fans. ( if not all)

For some reason my Wild East DVD of this is still sitting there unwatched. I should really rectify that very soon.

UPDATE: I finally watched it and I thought it was great! (Excuse the rhyme)

Enjoyable but probably my least favourite of the trilogy. One Silver Dollar is still the best for me.

I thought it was great

Dunno what I was smoking. This film is slightly above average at best.