Also known as - Ballad of a Bounty Hunter (my version) and Django, a Bullet for You - this span-spag, paella western caught my eye from the attractive poster, wherein the character Mary is holding a rifle and looking pretty damn sultry (in a similar stance to the gorgeous and world-weary Helene Chanel (as Pearl) in the recently watched Cjamango).
This film is nowhere near that good though (spaghetti-wise) although Nuria Torray does a good job of holding a rifle, and a shockingly bad script, together. She is one of the (few) good reasons to watch this film. One of the other good bits for me to suffer this nonsense, it is that I get to start a thread.

At one point in the film James Philbrook, our aged hero, is likened to a coyote - but for the most part he’s referred to (more boringly) as Sam, or more often, Foster – and never Django - and not the Coyote of those previous Zorro-like offerings .
According to imdb, Philbrook’s been in a number of other Spanish produced westerns that I’ve never heard of, [b]If You Shoot… You Live /b, and [b]Los Siete de Pancho Villa /b, and also[b] Fedra West /b – which I have heard of and probably seen. Besides this, he’s played bit parts in a number of American westerns that I probably care little of, but others might know about?

His love interest in this span-spag is the much younger, and quite gorgeous, Mary – played excellently (given the dodgy storyline) by Nuria Torray (who was also in the … Pancho Villa one), and apparently also way down the list in Fidani’s One Damned Day at Dawn…. She was also in Django Does Not Forgive – a film I’d be happy to check out (if only for her) – but is one of the few spags I don’t own, but now on my want list.

All in all - It’s a reasonably shit film, but with a few redeeming qualities (mainly in the forms of Mary, and a marvellous bandito called Ricardo). It starts with Coyote/Sam/Foster (who will from hereon in be referred to as Sam as it’s quicker to type) conforming to another type of type - as a whitey-hattedy good-guy bounty hunter (in the American B movie mould -whereas if we were in proper spaghettidom we’d want a dark-clad stranger) doing whatever a man’s gotta do to prove he’s a proper man, in a very un-spaghetti style.

This whole moralistic tale starts with a bit of music heralding our fellah in, (which sounds like Hank Marvin playing a wonky version of that I’d rather be a Hammer than a Nail crap), and our Sam calls on Mary, cos he’s in need of a bit of attention, having been wounded after being attacked by Indians, (for fuck’s sake - can we get spaghetti for a moment ???) and then by one of a gang of 5 mexi-baddies.
As he strips his shirt off (and he tells her he had once loved, but his wife and kid were killed by injuns), she twinkles nicely, and flirtingly hints that an old fuck like him can live and love again - obviously being forced by the dodgy script to have a bit of a thing for older men (I wish). She gives him one of her brother Jimmy’s shirts (who hates Sam ‘cos he’s a bastard bounty killer, whilst he is wholesomely out helping said mexi-gang in robbing the local bank – and, to Jimmy’s woe, getting the manager shot in the process). Our Jimmy is a very spoilt brat, but Mary won’t have a bad word said about him – you can see where this is going… bounty killer… lurve interest… and bandit brat-bro?

Anyway, Sam catches up with brat-boy at the same time as the posse do, but lets him escape – presumably for Mary’s sake, and Sam’s given 3 days to hunt down killers and gold to redeem himself. “Get the reward ready” says our man.
But our mexi-racist-bastards are out to double-cross Jimmy of his share (of course), and as a side-line decide to have a bit of a go on his sister - an act of barbarity that is foiled nobly by Sam, but her house gets burnt down in the process. She blames Sam (who’s actually saved her) and she sends him packing… and off he goes, and the music goes all guitar-y so we know we are in for tequila and senoritas as we go over the border to a bar … hoorah!

Now – this gang of (now 3) bandits - are one of the more colourful elements of this pretty dire offering. Their leader, Sonora, 8) is a swarthy handsome type, prone to big white-toothy grins and boasting, and my favourite – Ricardo - who can’t afford the same dentist as his boss, and who gap-toothedly flaunts his Mexican-baddiness at every opportunity,until Sam unwisely wipes the dentally-challenged smile of his face, and the whole film goes downhill with his demise.

Jimmy is love-blind for Sonora’s squeeze though – Rita :-* (Pearl Cristal) but she is a bad ‘un,

and Sonora and his gang taunt him, telling him that (the hated) Sam and sis Mary are “getting on like a house on fire” (I found it funny, despite Jimmy not getting it), and then Rita dumps Jimmy with a crushing “Don’t be a fool – I stay with my husband”. Jimmy is mightily hurt! Sam smacks him about a bit and he gets hurt a bit more.

Now, Sam and his captive Jimmy are crossing injun-land, (complete with cliched tom-tom drums as the soundtrack). They scrap and banter throughout the next 20 mins, and the whole stupid premise turns very slightly into a mentor/pupil relationship wherein Jimmy gets all righteous, learns the error of his ways, and gets into ‘a man’s gotta do what a man’s gotta do’ territory - and just in time as well, 'cos stupidest of stupid - guess who gets off the coach in town, in a shocking attempt at storytelling…?

… It’s only Sam’s 16 year old kid!!! (The one who was killed by injuns - remember?)… and young Charlie’s just found out his dad is alive - but with his dad not there, he happens to bump into senorita-Rita – who’s crossed the border in an unbelievably fortuitous act, whereupon she befriends him (ah-ha!) pretending to be friends with his dad. Instead she hands him over to White Feather (those fuckin’ injuns again) who are Sonora’s mates, to barter for her mexi-lover, (and what’s left of his bollocks), to be released from Sam - who’s been booting him about a bit (another rare good bit).

The barter goes ahead – Jimmy and Charlie scuttle off leaving Daddy to get some redskin nastiness levelled his way, but the new man of morals, Jimmy, doubles back, getting lovely Rita a bit of revenge comeuppance in the process, and then he’s onto our staked-out Sam (complete with soaked bindings that shrink and cut your wrists off, and Sonora gloating on about “vultures to tear out your guts”). Unfortunately for us, but expectedly, he saves Sam, and off they go back to America-B movie land, with Sonora and Injun hoards a-following. Out of bullets, and with the non-spaghetti-esque injuns circling the house, Jimmy turns into the hero he’s predestined to be, and saves a bit of the day, until the sheriff’s posse arrive to save the rest.
And we know what’s gotta happen to badboy- turned-goodboy Jimmy? – so, redeemed in death - Sam lies to Mary about Jimmy having being an innocent in the robbery/murder - and that really he’s a damned fine kid and a hero to boot, that he did for Sonora, loved his sister, saved the day, took old ladies flowers, brushed his teeth twice a day, and is probably hung like a horse.

As Mary cuddles Sam, and the sheriff tells him he’s due a reward (presumably the $2,000 as mentioned in the title), Sam declares he’s gonna give up bounty huntingness for good, pay his kid through college, buy a ranch, and settle down.

At this point my dvd froze (really) - as the sentimental twaddle overload kicked in, 50 seconds before the end (oh why not 50 minutes, I now question?).
I can only hope that Mary didn’t go deliriously lustworthy for Sam in a psychedelic bizarre frenzy of 50 seconds of topless abandonment! Now that I would’ve liked to see!

The other 82 minutes I could have done without!!

Almost hopeless… half a star.

Buried in the infinite subterranean vaults of the SWDb Forum, this thread wasn’t easy to find. I started to watch Dos mil dólares por Coyote earlier today but exigently needed a break after three-quarters of an hour. As Reverend_Danite’s deliberations above indicate, those forty-five minutes could be best described as a truly mind-numbing experience.

Last night, after a rehabilitation break of several days, I intrepidly tackled the second half of Dos mil dólares por Coyote: more hare-brained dialogue, bad acting, ridiculous “Indians” and the return of the protagonist’s lost but not prodigal son, who will go back to school and get a proper education by dint of the reward money his bounty hunting daddy has procured. Good heavens, not for all the tea in China would I watch this dud again.

As a side note: Some bloggers claim that the inspiration for Jean Giraud’s cover-art of L’Homme à l’étoile d’argent (1969) was an issue of French film magazine Star-Ciné Bravoure, 144 (1968), showing on its cover-page American actor James Philbrook in a scene from Dos mil dólares por Coyote. Giraud used that image without a doubt as his reference; I’m however sure it shows neither Philbrook nor a scene from Klimovsky’s Western. 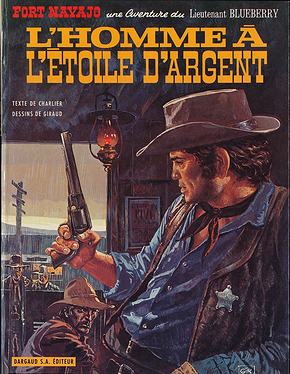 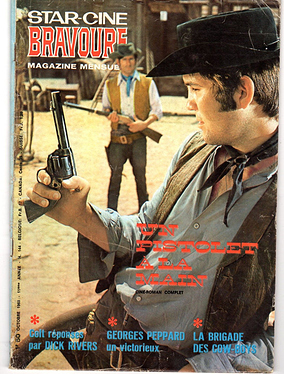 I’m however sure it shows neither Philbrook nor a scene from Klimovsky’s Western.

Don’t ask me why, but that was the norm. 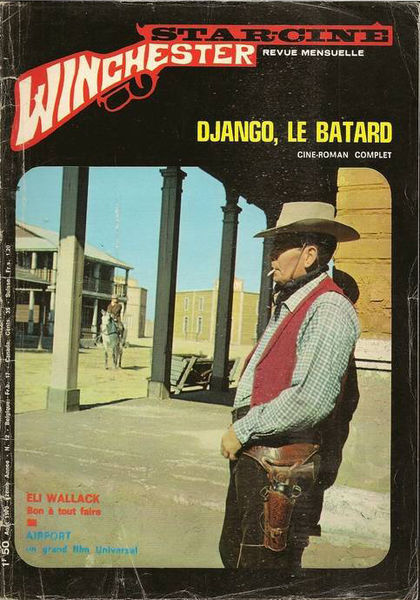 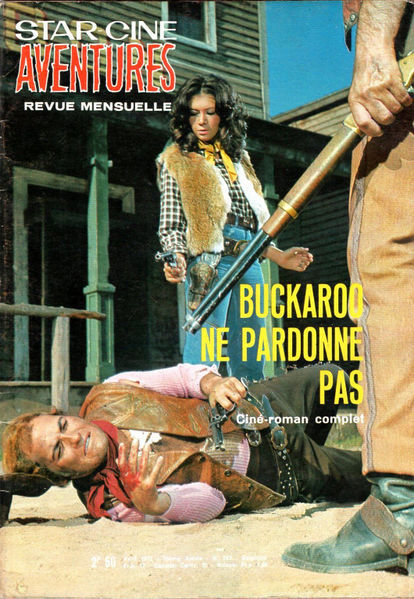 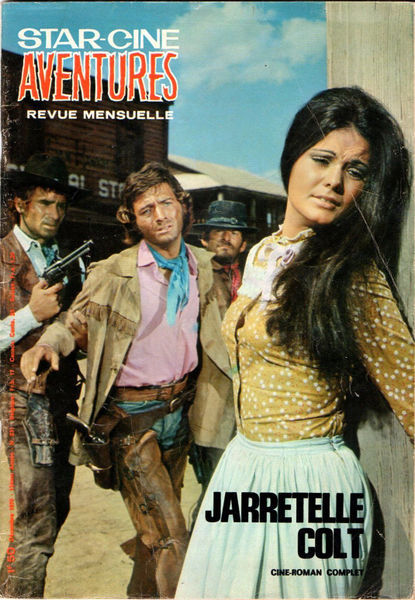