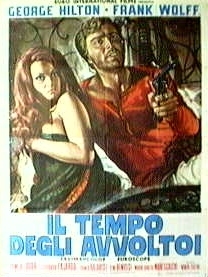 I enjoeyd a lot this movie, my vote is [7/10]. Frank Wolff does a bandit that has some illness, and made violent performes, just like putting a whore’s face in a ‘frijoles’ plate, no mercy by his part.
Hilton does his usual, some funny parts when he tries to scape Fajardo’s farm.
And finally there is a beautty (unfortunatelly I cannot remember her italian name) wife of Don Jaime (Farjardos).
I might say that S.W. lovers gonna like this, music is very enjoyable too!

Judging to the german version with only 84 min.

Yep, solid movie. Got it on vhs. Like many others it needs a dvd release.

One of the better hidden gems of the genre i stumpled upon. Nice Hilton’s role, but it’s Frank Wolff’s movie. His character seems just an stylish anti-hero type at first but he turns out to be insane sadist. There’s also Edwardo Fajardo i supporting role, he’s one of the best supporting actors of the genre for me and always adds some quality to the movies he’s in. This movie reminded me of “Four of the apocalypse” - it’s road movie as well with themes of retribution and revenge and it features a scene of very sadistic violence performed by a character that shows how psychopatic he is.
Recommended - 8/10.

[quote=“alk0, post:4, topic:939”]but it’s Frank Wolff’s movie. His character seems just an stylish anti-hero type at first but he turns out to be insane sadist.
Recommended - 8/10.[/quote]
Totally agree and it’s funny having ‘the Black One’ referred to as Tracy - (mind you Tracy in our local hostilery shows some psychopathic tendencies at times). Hilton, Fajardo and Wolff are great, but as you say, it’s Frankie who steals the show. (I said this about him in regard to God Forgives … after last night’s viewing of that.)

I was looking forward to this and Hilton, Wolff and Fajardo did not disappoint. I am with alk0 on this.
Recommended - 8/10.

Watched this one this morning and thoroughly enjoyed it. Nothing special but a solid 3 star spaghetti for me with Frank Wolff in top form as the black clad, epileptic pyscho baddie. What more could you ask for?

One thing though. What was it with the italians and this name Kitosch? Did they think it was a common american name? I’ve seen it turn up in a number of spaghettis (Alberto Dell’Acqua even adopted it as his english stage name) but have never actually heard of a real person with that name. ???

Just received a fan dvd r of this one with english audio, with the Italian dvd being used as picture source.

Just received a fan dvd r of this one with english audio, with the Italian dvd being used as picture source.

Yeah i’ve got that coming as well, under the title Last of the Badmen

(…) Did they think it was a common american name? I’ve seen it turn up in a number of spaghettis (Alberto Dell’Acqua even adopted it as his english stage name) but have never actually heard of a real person with that name. ???

In those days few Italians spoke English
Actually, the study of foreign languages, and English in particular, has only become popular under Berlusconi, who wanted to modernize the country and thought it was essential that Italians learned English (probably his only good idea).
Anyway, many English names adopted by actors or directors sound a little strange, at least to me:
Calvin Jackson Paget, Stanley Corbett, Miles Deem, Dick Spitfire …
Even Montgomery Wood sounds a little bizarre to me

Garko plays a character called Korano in one of his films
Korano is of course taken from koran (Qur’aan), the holy book of Islam, and I don’t think a muslim would ever call himself, or his child, Korano.

George Hilton is O.K in this one, before things became a bit silly in some of his 70’s outings, and his character reminds of the his one in Massacre Time at times. Frank Wolff of course steals the show as the black clad gunman who is hell bent on revenge, aswell as having a few other problems. One of Wolffs best western roles I have seen so far. Sometimes I liked the score, but other times I did not. Demofilo Fidani is mentioned in credits for set design. The fan dvd which uses the Surf dvd as picture source shows strong colours and is a clear picture, but the english audio does have some hiss as taken from an old VHS. Could not really 100% understand why it took Hilton so long to escape from the ranch of Eduardo Fajardo, as Hilton does of course prove to be a not bad gunman.

Well worth a view if not seen.

Watched this last night. While, in my opinion, it wasn’t as fantastic as everyone is saying, it was pretty good. Frank Wolff definitely steals the show with his sadistic/insane performance. Hilton is just George Hilton! I think it really started to pick up about an hour into it.

Thought this one was great and has a strong melancholy feel to it reminiscent of things to come in the late 70’s. Wolff is a bit too pudgy to be taken seriously in leather but he still looks as cool and as mean as ever. Loved the open ending

Yeah I like the ending a lot and the movie, the only problem I had with this was I found George Hilton a bit annoying with comedic performance at times. But he comes through in the right places.

Watch this one last week. I think it is enjoyable but average, of course.
Actually I didn’t like Frank Wolff performance in this one, he just doesn’t fit the role.
Although, there are some funny scenes that I won’t easily forget.

Need to watch it again, I wasn’t in a very good mood when I first saw it some time ago… I remember it had some good moments, but I also thought that the role of Wolff was a bit too much for him.

[quote=“ENNIOO, post:11, topic:939”]Could not really 100% understand why it took Hilton so long to escape from the ranch of Eduardo Fajardo, as Hilton does of course prove to be a not bad gunman.[/quote]I think the beginning of the movie is quite weak because it’s not clear what’s the background of the Kitosch. Why do they want to keep him in the ranch if he’s such a pain in the ass? Movie gets better once Frank Wolff enters the picture though and is really entertaining from then on. Above average film and one of the lesser gems of the genre, I’d say.

saw this last night and pretty much agree with almost everything that’s already been said about this film. i thought it was a bit uneven and clunky at the beginning and couldn’t make it’s mind up whether it wanted to be light hearted or serious . once it gets going it is very entertaining and i like George Hilton in this and it has some good moments. T he climatic gunplay is a little disapointing, tracey is polished off too easily for my liking. pretty good film overall 7/10.

Gonna try to get a review up at FFoP soon on this, but I wasn’t so hot on this one. I think Wolff was horribly miscast, he just wasn’t convincing as this paunchy, middle-aged bad guy with apparently no motivations for his actions, as far as I could tell. I like Wolff a lot, but he wasn’t doing it for me in this one. Hilton was good, though. Not a horrible outing by any means, but nothing memorable.

A George Hilton movie in which I kind of enjoy his character? That’s a first. Last of the Badmen reminded me of One More to Hell, both film having for a protagonist an adulterous ladies’ man with a loose moral code played by Hilton (although, he’s more of an anti-hero in this one) who befriends a dangerous outlaw. The good news is that this one’s better. The character of the dangerous outlaw, Tracy, was very interesting (and well played by a surprisingly cool Frank Wolff) and I liked his interactions with Kitosch, who is not as good as he appears to be, but they could have developed the relationship further (especially their falling-out). The main interest in this film is, after all, not the story, but the dynamic between Kitosch and Tracy. There is a few other elements I really liked about the film (the fact that the main bad guy is on a quest for revenge or that the other “bad guy” seems to be a better person than the hero and the psychotic tendencies of Tracy), but a lot of it could also have benefited from more development or a better execution.

I have the impression that a more skillful filmmaker would have done wonders with this one. It almost feels like the director had no idea that he had a potentially great movie in his hands or maybe he didn’t care, because this is very routine stuff despite the interesting premise. Sometime it feels like it’s going for more, but it never really does, at least the actors elevates the whole thing. Enjoyable, but too mediocre in its execution to be much more.