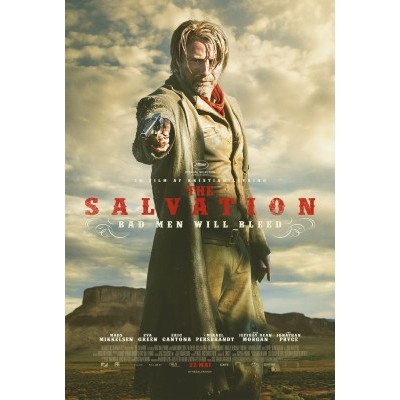 Synopsis:
The American West in the 1870s. A danish settler named Jon (played by Mads Mikkelsen), years after fleeing his home country to start a new life, finally manages to bring both his wife and his son to him after years of separation. Shortly after arrival, both get murdered. Jon, enraged and in pain, kills the man in return. Unfortunately, that man was the brother of a ruthless gang leader in the region, who swears vengeance.

A very dark and brooding movie, dealing with vengeance, pain, betrayal and revenge. The movie is very dark and, in places, incredibly bitter, but manages to tell a very compelling story. The production values are mixed: On the one hand, the movie shows some rather jarring, noticable CGI effects. On the other hand, costumes and setting look very authentic (and suitably barren and dirty). Also, why they may not have had much of a budget, you can tell that the director and the actors tried to make the most of it. (Oh and by the way, don’t go by the one-sentencce synopsis found on Wikipedia and IMDB - that one is actually pretty misleading!)

I’ve seen the movie while it ran in german cinemas (last time I checked I’ve still noticed a few placed that screened it), and I can definitely recommend it. Already pre-ordered it on DVD (scheduled release for germany is February 24th 2015, if anyone’s interested

Some thoughts I wrote in other thread after seeing the film:

The Salvation (http://www.spaghetti-western.net/index.php/The_salvation)
-New eurowestern with Mads Mikkelsen, Mikael Persbrandt, Jeffrey Dean Morgan and Eva Green. Story is very traditional revenge story / bad guy trying to drive people out of their precious lands which we have seen dozens if not hundreds of times. I’d say that the film is a mix between contemporary american westerns and spaghetti westerns. The best part is the shoot out in the end which reminded me shoot outs in Stranger films. And like with many recent westerns there’s the inevitable Leone references. Actors were pretty good, especially Eva Green whose strange mute character was really captivating.

I was expecting something else, another try to modernize western, but this is full-blooded old-school no-nonsense revenge western. And it is actually quite good. Off course I was annoyed with some modern elements in the appearance, like too saturated colors and fake skyline with static clouds (I guess, it is not worse than old westerns with painted backgrounds), but other than that everything is done like it should. It took some cues from OUATITW, with oil replacing the railroad and Morgan’s bad guy clearly modeled around our dear old Frank.

I was thinking about this film tonight because I saw the poster on Netflix and remembered how good it was. I think I am going to have to rewatch it again very soon. Pretty f’n badass western with some brutal moments

If you haven’t seen this yet, highly recommended

Added to my watchlist. I have heard of it before, but I’ve never actually got around to watching it.