Stagecoach is such a basic western, coined so much typical genre motives, things which were in the following decades reiterated to death, so that they long have become total cliches, as well visually as thematically, that I cannot enjoy it completely. It dose help of course that Stagecoach was the beginning, but still I can only watch it with the knowledge of all that followed it up to today.

I rewatched several of Ford’s important westerns in the last years, and while I never enjoyed Wagonmaster, My Darling Clementine and The Searchers as much as I did last year, Stagecoach stays where it is. And it is the overly theatrical The Man Who Shot Liberty Valance which sunk in my estimation. That one belongs now clearly in the category “overrated classic”.

Forgot the other 1939 western I watched last week.

Very enjoyable, although Marlene Dietrich’s character Frenchie again couldn’t be separated from the Mel Brooks parody of her played brilliantly by Madeline Kahn in Blazing Saddles. It’s a fun film though and Jimmy Stewart is excellent.

Stagecoach is such a basic western, coined so much typical genre motives, things which were in the following decades reiterated to death, so that they long have become total cliches, as well visually as thematically, that I cannot enjoy it completely.

I think that basic (by today’s standards) handling of western tropes was a great part of what made it so enjoyable for an 8-year old boy obsessed with the genre. It had all those tropes I thought of when imagining the Old West, like Marshals, Apache ambushes, and ritualistic duels, all put together very well with some funny characters - I thought at the time at least - (like Andy Devine’s character) on the top of that. I couldn’t have asked for anything more. Also, as it was my first “real” western, I had nothing to compare it to anymore than the audience in 1939 had.

All this might of course change if I rewatch it now, but the western-obsessed child within me will still be delighted no matter what. And the climatic shootout, which I mentioned earlier, is still one of the most creatively directed sequences I’ve seen in any western. 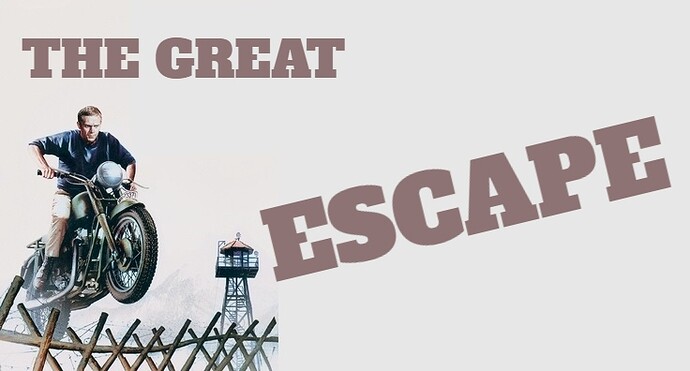 Apparently this is Britain’s favourite Christmas movie. It’s easy to see why: it’s an excellent time-filler, the plot is easy to follow, and if you don’t like the action, you can always play a ‘spot the star’ game: Steve McQueen, Charles Bronson, James Coburn, Donald Pleasance, Richard Attenborough, James Garner, David McCallum (that guy from U.N.C.L.E.!), Gordon Jackson (that guy from Upstairs, Downstairs!), they’re all there.

The Great Escape was based on true events (namely the escape of 76 POWs from the German POW camp Stalag Luft III in Lower Silezia - now Poland - in 1944) but the events definitely got the Hollywood treatment: the first half of the movie is mainly played for laughs and you’ll almost get the idea that the POWs were having a good time. The camp regime was relatively mild (there was a substantial library with schooling facilities) and POW camps were no concentration camps, but they weren’t holiday camps either. Halfway through things get a bit more serious, and eventually they even get dramatic: few of those 76 escapees made it to the free world, and 50 of them were brutally executed after being captured.

I like director Sturges’ work, but I prefer his smaller, grittier efforts (notably The Law and Jake Wade and Escape from Fort Bravo) to his audience pleasers like The Magnificent Seven or this one. The Great Escape is probably best remembered for Steve McQueen’s motorcycle escape: it became a landmark moment in film history. Personally I liked James Garner best as the team’s scrounger

Love this one. Possibly my favourite Hawks.

Never heard of this one. Sure you aren’t just making it up? 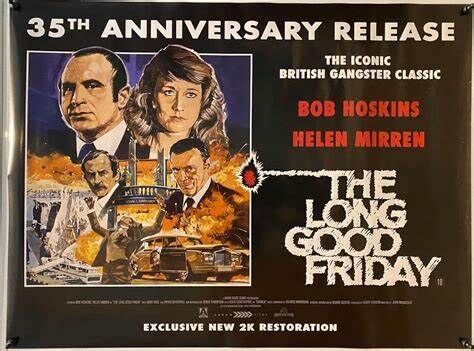 ’WHO LIT THE FUSE THAT TORE HAROLD’S WORLD APART…?' In my book, this has to be not only one of the best British films ever made, but also one of the very best gangster films ever to grace the screen…‘Bloody marvellous!’.

The ever-reliable Bob Hoskins was born to play the role of Harold Shand; a Londoner, a gangster, and a man whose ‘empire’ is turned upside down on one memorable Good Friday. 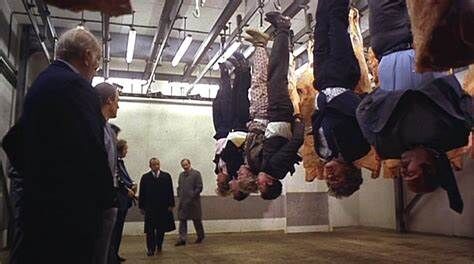 Bombings, lucrative deals with the Mafia, a marvellous soundtrack by Francis Monkman, plus a generous measure of great London locations and topped with reliable British character actors, ‘Friday’ is a delight to savour time, and time, and time again.

With a cast consisting of Bob, Helen Mirren, Derek Thompson, Dave King, Eddie Constantine, and Bryan Marshall, this slice of Thatcher’s Britain is a must-see - most ably directed by John MacKenzie (‘The Fourth Protocol’), and packed to the gills with intrigue, humour, suspense, and thespians of the highest order.
Above all, a film must have a memorable conclusion - an end that hibernates in the memory long after the cinema curtain closes - ‘The Long Good Friday’ has such an ending, that not only hibernates, but also germinates long after the last iconic scene fades. 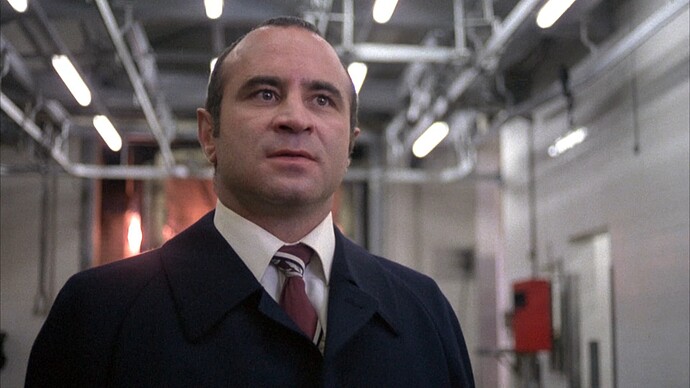 If you haven’t seen this film, then I would urge you to obtain a copy. The one I watched was a beautifully restored 2K bluray steelbook, courtesy of ‘Arrow’ - containing a booklet of ‘cockney rhyming slang glossary’ for those who don’t understand gangster chat…

Harold Shand: "What I’m looking for is someone who can contribute to what England has given to the world: culture, sophistication, genius. A little bit more than an 'ot dog, know what I mean?" 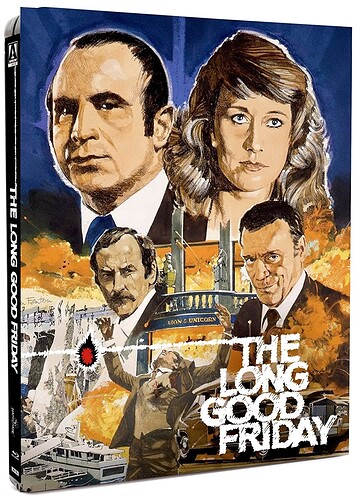 As previously mentioned, Francis Monkman (who was the founding member of ‘Sky’), supplies the requisite amazing soundtrack…

Everything about this film - IMHO - is perfeck!! Pool Attendant: They kept it all incognito. They’re gonna collect the body in an ice cream van.

Harold: There’s a lot of dignity in that, isn’t there? Going out like a raspberry ripple.

I haven’t been posting in this topic for a while, here’s the last 20:

5 posts were merged into an existing topic: The Last Western You Watched? ver.2.0

The other night I finally watched The Conformist for the first time. Quite a movie, but I wasn’t blown away, I don’t know… didn’t touch me as it should have? May have to give it another go some other time

The Northman. Impressive and grim, but u less you dig all this Norse legend stuff, it won’t amaze 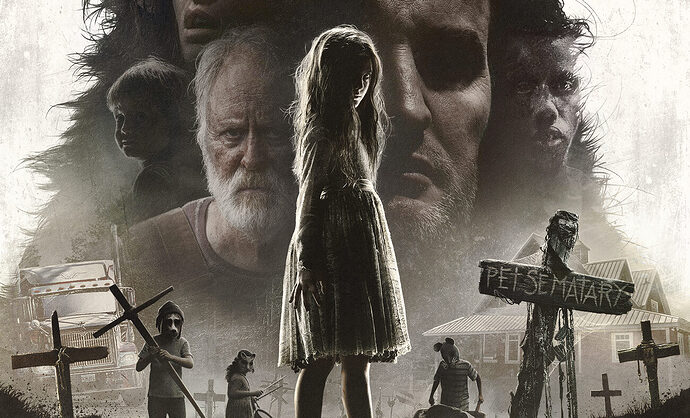 Yes, cemetery is written wrong, but there are good reasons for it. Like ‘cemetery’ turned into ‘sematary’, the people who are buried there, turn into something else. One line from one of the characters says it all: There’s life after death, but it ain’t heaven.

This is the second adaptation of the Stephen King novel (one of the best of his genuine horror stories). The premise maybe a bit ridiculous, but at the same time it’s the ideal premise for a horror movie about our thoughts and fears about what happens after we have left this world.

Pet Sematary refrains from the gory tendencies that have infested the genre, instead it relies more on atmosphere and (well-presented) jump scares. It’s a bit of a slow burner (as a result reactions were mixed), but Jason Clarke is ideally cast as the family father who first buries his daughter’s cat and then his daughter on this ‘sematary’. And yes: both the cat and the daughter (played by 12-year old Jeté Laurence) will really make you feel uncomfortable. There’s also a bearded John Lithgow as the neighbor who introduces Clarke to the secrets of the burial ground. 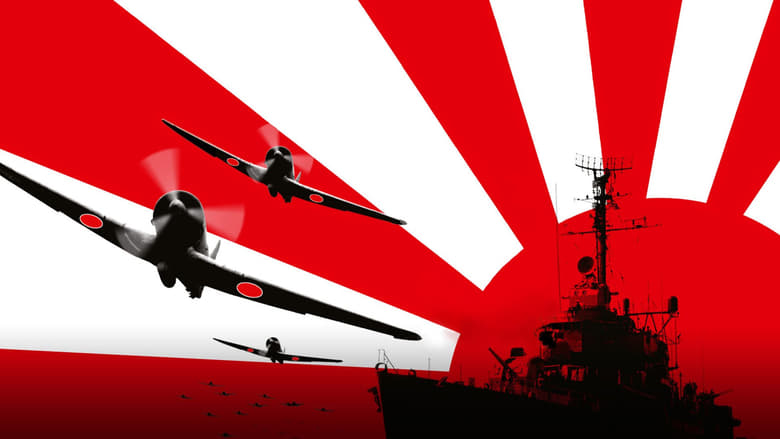 Tora! Tora! Tora! (*1) was released in 1970 and was a co-production with Japan, but it’s nevertheless a typical Sixties Hollywood War Movie, large-scale, big-budget, very long (but with an intermission that will give you the opportunity to stretch your legs). It was supposed to be a new LONGEST DAY but 20th Century Fox executive Darrell F. Zanuck wanted to tell the events leading up to the attack on Pearl Harbor (December 7, 1941) in revisionist terms, and therefore developed a co-production with Japan. Originally Akira Kurosawa was to direct the Japanese scenes but he was replaced shortly after filming had started. With or without Kurosawa, the result is an epic offering the viewpoints of both belligerent parties, quite unique for a major production from the era.

Tora! Tora! Tora! was praised by history buffs for its historic accuracy, but met with some truly sour critical reactions. Roger Ebert even called it one of the dullest blockbusters ever made. The ‘neutral’ approach led to a certain aloofness, but there’s more: The Longest Day had offered a panoramic view of the events, but had also focussed on the ‘small stories’ of individual soldiers, offering viewers characters they could identify with. In Tora! Tora! Tora! these ‘small stories’ are absent: the actors all portray American and Japanese officers and other dignitaries, and what they’re doing most of the time, is standing around and reading telegrams and intercepted messages to each other. The first part of the film, which divides scenes from both countries, therefore feels rather clinical, too much like one of these docudramas from the History Channel.

But tension mounts after the intermission, and the recreation of the eventual attack is an impressive spectacle. Okay, not all models of planes and aircraft carriers are completely convincing, but note that it was all done without CGI! Some explosions were actually so ‘realistic’ that the stunt people really had to run for their lives! No, they don’t make ‘m like this anymore.

(*1) I do not speak Japanese but noticed that there still is some discussion on the exact meaning of the term ‘tora!’. According to most linguists it refers to a surprise attack, but because of the large number of homophones (words with the same sound but different meanings) in Japanese, it may also refer to the Japanese word for ‘tiger’)