Yep, excellent western, and totally underrated nowadays compared to the usual classics. Probably it is only cause Ritt is a forgotten name?

Yeah, its a good one for sure

Followed on from ‘Hombre’ with another memorable adaption of a superb Elmore Leonard story… 1971’s ‘Valdez is Coming’. 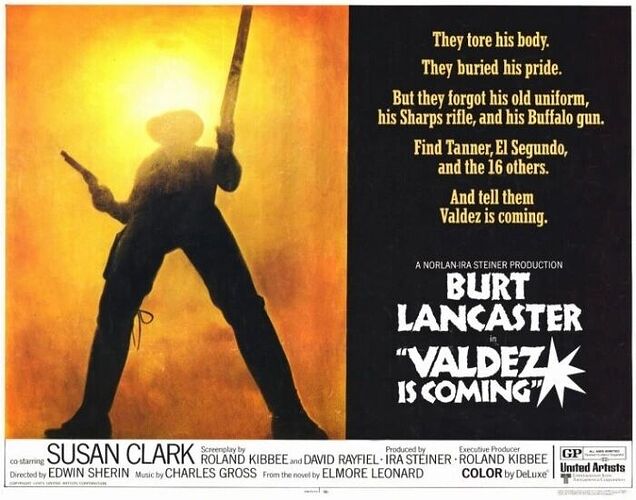 Directed by Edwin Sherin, and filmed in some instantly recognisable beautiful Almeria desert locations, Burt Lancaster stars as a Mexican sheriff, Bob Valdez, who is forced to kill a black man wrongly accused by land-owner Frank Tanner of being a murderer.
Valdez asks Tanner for monetary help for the man’s wife, but he is ridiculed and almost killed by Tanner’s henchmen. However, they have picked on the wrong Mexican, and what follows is a Western vaguely reminiscent of ‘First Blood’. 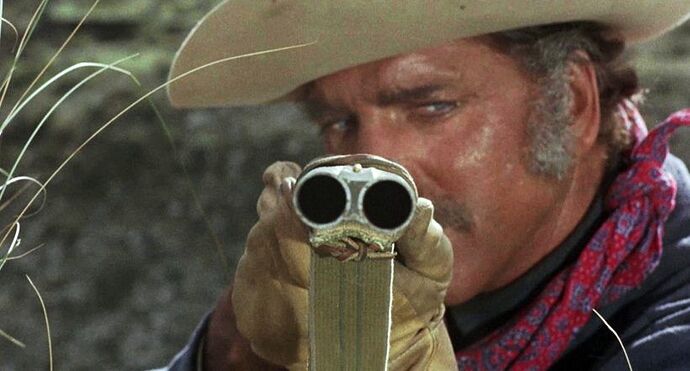 As with ‘Hombre’, ‘Valdez’ yet again ably deals with the issues of prejudice, but this time aimed against ‘inferior’ Mexicans. It is rather gratifying when the aggressors comprehend that their main target is anything but inferior…He is more a one-man army who hates injustice against individuals, or a people. 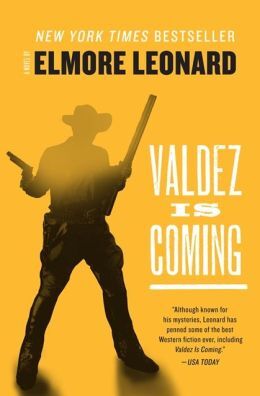 Burt Lancaster, as watchable as ever, is accompanied by familiar faces which include Frank Silvera (‘Hombre’), Susan Clark, Richard Jordan, and Jon Cypher.
All in all, this is a first-class ‘Oater’, and would make a wonderful double-bill with either the aforementioned ‘Hombre’, or even Lancaster’s equally bloody ‘Lawman’ (1971). 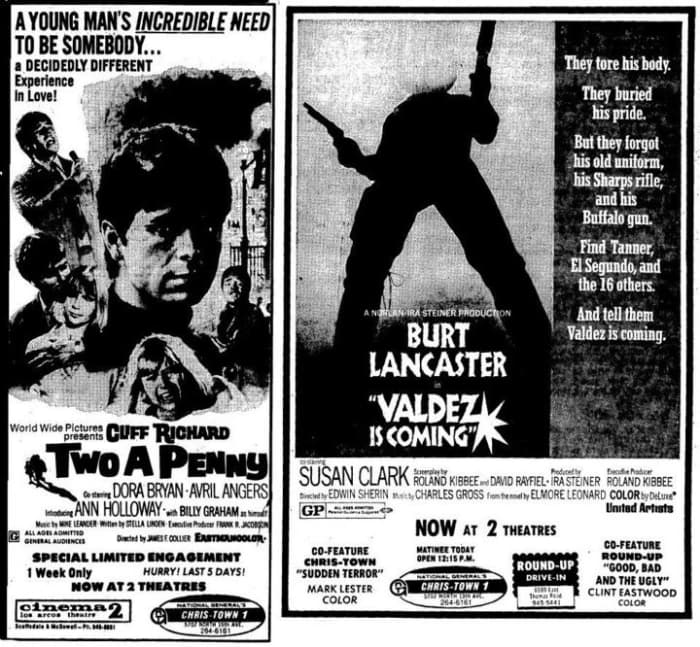 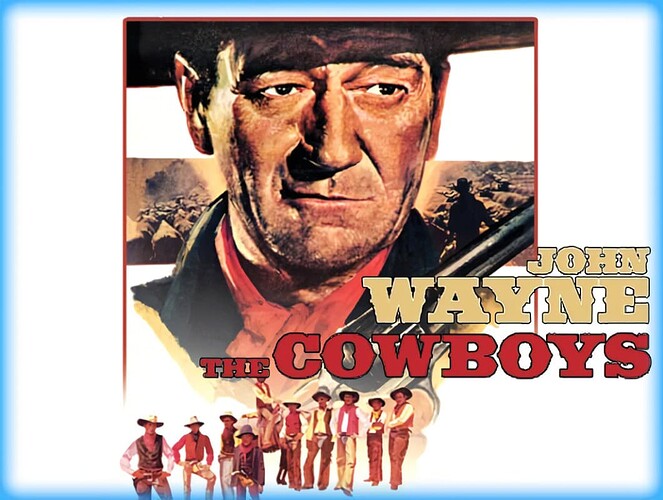 Directed in 1972 by Mark Rydell (‘On Golden Pond’), I regard ‘The Cowboys’ as one of John Wayne’s finest Westerns.
When his ranch-hands desert him, Wil Anderson (Wayne), is reluctantly forced to hire on schoolboys to move his cattle herd.
Thus, the film provides plenty of opportunity for the ageing Wayne to ‘bond’ with his new-found ‘sons’. 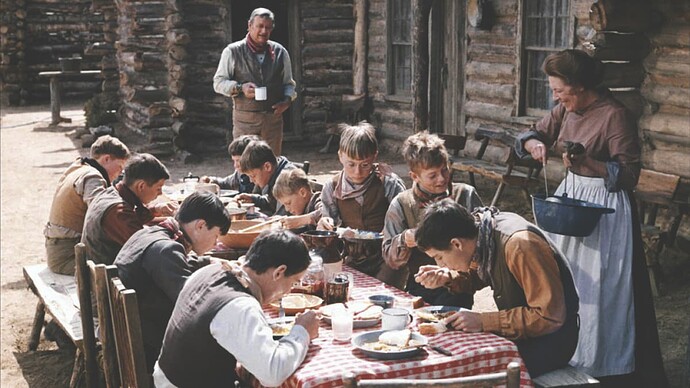 A stellar cast also includes Roscoe Lee Brown, as the black cook (and voice of mediation) between the eager, but inexperienced boys, and the tough-as-nails Wayne character.
An added bonus comes in the forms of the ever-reliable Slim Pickens (‘Dr. Strangelove’); and a particularly reprehensible rustler out to steal the herd - played with professional expertise by Bruce Dern, at his most delightful nasty best.
One scene, in particular, between Wayne and Dern, would go down in the annals of Western lore, and mark Bruce Dern out as one of the most vicious SOB’s to ever grace the screen. 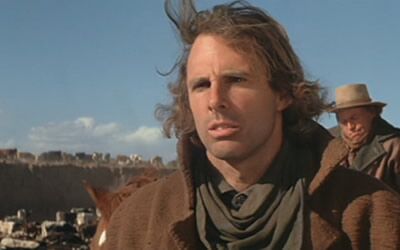 With a truly magnificent music score provided by renowned composer, John Williams, ‘The Cowboys’ is a darn good film, which features John Wayne approaching the end of days - sadly ailing from cancer, but still undeniably at his towering, commanding best. 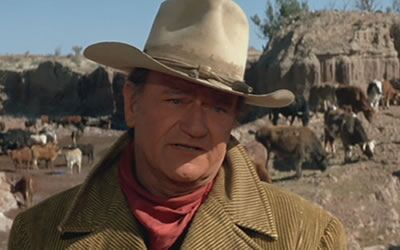 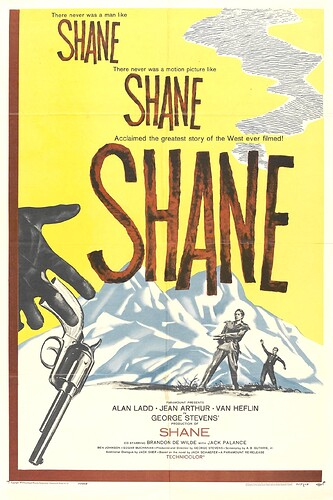 Starring Alan Ladd (in his most famous role); Van Heflin, Jean Arthur, and Jack Palance, there is nothing more to say about this truly majestic Western, that has not been said a million times before. 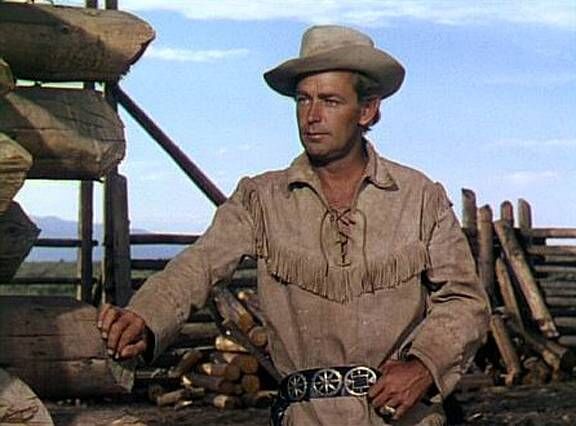 Beautiful, meticulously filmed, with memorable performances, and a gorgeous soundtrack, this classic sagebrush saga is one of the best Westerns ever made, and is a must-see for anyone who loves an engaging tale of good vs bad…land-barons vs homesteaders. 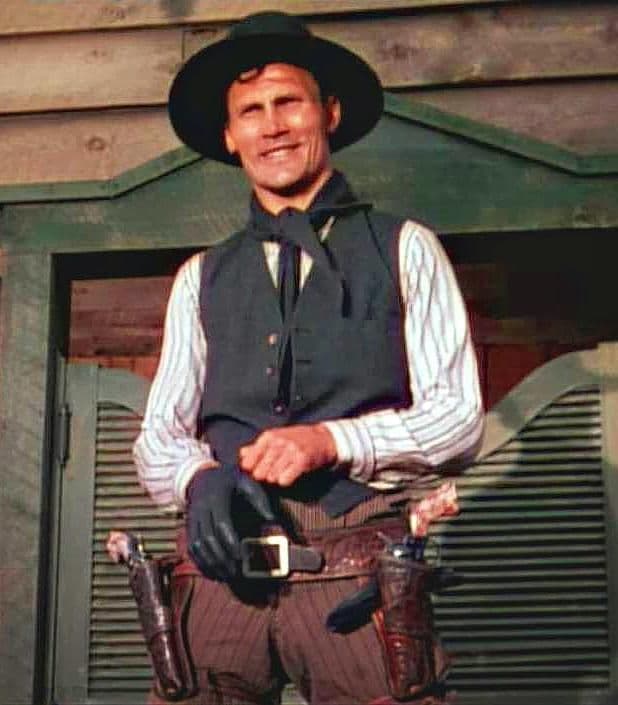 Mention, I feel, must be made of the superlative ‘natural’ sound effects in ‘Shane’. Each crash, bang and wallop, as in Leone’s ‘OUATITW’, is amplified to the tenth degree…gunshots, breaking glass, and livestock kicking over a milk pail.
There is also a pervading sense of peril hanging over the proceedings, never more so than when a homesteader is gunned down mercilessly, and is left to drown in a sea of blood and mud. The viewer can inwardly wince as the bullet strikes home…one of the few early Western instances where the impact of a 45 slug can literally be seen and felt. 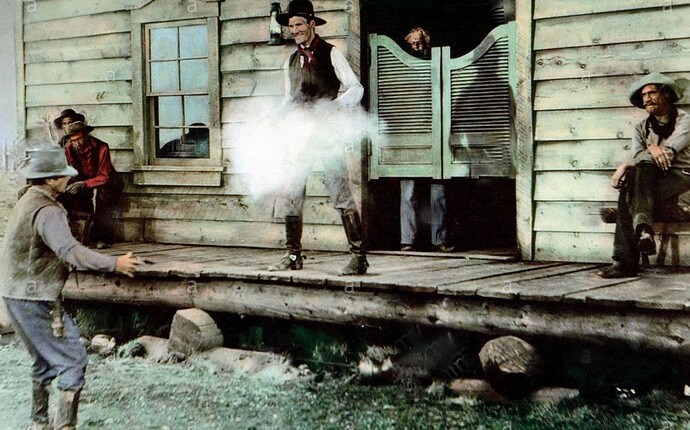 All in all, a once-seen, never forgotten film that remains in the memory long after the final iconic scene fades away. This is an endearing frontier tale of hardship, friendship, loyalty, hero-worship, and justice overcoming tyranny and injustice.
An exquisite experience, which is best savoured on Bluray… 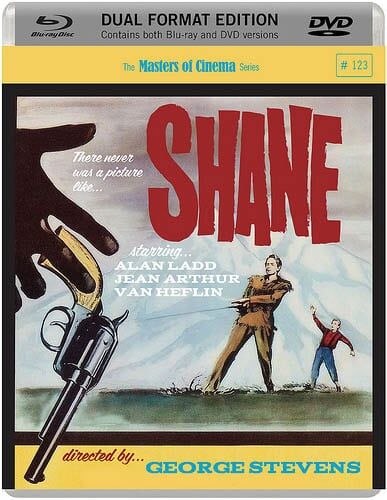 I’ve had a real Spaghetti itch this past week so I’ve made a nice dent in my watchlist. All of these are first time watches:

you’re kidding? you had never seen it before? wow. congrats, welcome to the real world

Yeah I know right. I started watching it about a year ago but turned it off after about an hour cause I was tired. I just never resumed it lol

You didn’t know what you’d been missing, did you?

My spaghetti western itch continues on another week with all first time watches. According to my Letterboxd list, I’ve now watched 94 SWs. I’m still deciding what I’ll watch for my 100th.

Tepepa being a mere 6/10? Did you watch the uncut version?

I watched the 2 hour 11 min version. I just thought it was quite boring compared to the other big Zapata westerns like Bullet for the General, The Mercenary, Companeros etc - while also showing less interesting ideas and opinions on revolution. I also felt that Orsen Welles was giving a very half-arsed performance and I don’t really think that Milian’s usual eccentric performance worked in this one. I did enjoy the ending though, showing that the cycle of revolution will always continue.

One of the things I enjoy most about this site is how we can all see different movies in different ways. We may not agree (specifically about The Forgotten Pistolero and Taste of Killing

) but I enjoy seeing differing opinions anyway. What did you think was “meh” about those two?

Got done watching two westerns about Lindo Mexico.
The first was Hardcase.
A film about a American war veteran who gets involved in the Mexican Revolution when his wife ran off with a Mexican Revolutionary. Just the right length and I found it funny sometimes. I love westerns set in the early 20th century

The other was Adios Sabata. The 2nd film in the Sabata series. I didn’t really expect I would like it but I was wrong, I did enjoy it. The things that bother me were the anachronisms. Though I shouldn’t expect historical accuracy.

I wouldn’t say I found Pistolero ‘meh’. For me a 6/10 is a good film that I wouldn’t necessarily be in a rush to watch again soon.

I think Pistolero will grow on you. I love Peter Martell in that movie and the score is one of my favorites.

As for Taste of Killing, I don’t necessarily think Hill was wooden but that the character was simply that stoic. He could say more with a wry smile than he could with ten lines of dialogue.

Whenever he watched a massacre through the scope of his rifle, the look on his face afterward conveyed more about his character and the type of person he was than any amount of dialogue could. I actually thought his performance was a study in subtlety.

I also loved the performance of George Martin, as usual, and the fact that afterward you could actually have a debate over who was truly the worst human being, our anti-hero Hank Fellows or the villain Gus Kennebeck. The difference between the two is negligible at best.

I concur with @LankyGringo on Craig Hill in Taste of Killing, and I’d like to add that for me its a 50/50 split on Fellows and Kennebeck’s morality, though I actually leaned a bit more towards Fellows because while his tactics of letting the bad guys initially getting away with massacring the army troops are most certainly questionable, I don’t think he’d ever let harm come to innocent bystanders, women, or children, whereas Kennebeck was putting his son in grave danger by being a notorious outlaw everybody wanted dead, making his son a target to use against him.

I’ll make sure to give it a rewatch next Spagvember

I agree with you on every point Supertwix. I can appreciate that Petroni was trying to tell a deeper story than you usually get from Spaghetti Westerns, but to me it didn’t work.

I pulled up Films&Clips Westerns and they had recently added Panhandle Calibre 38. I saw that it had Keenan Wynn in the cast, so I decided to give it a go as it is one that I’d never seen. This movie has altered things for me forever as I can now say, beyond the shadow of a doubt, that White Comanche is no longer the worse spaghetti western I have ever seen.

I wanted to look away. I wanted to turn it off. But this movie is such an abysmal mess that, much like a car wreck, I couldn’t take my eyes off it no matter how hard I tried. It is shame that such a great character actor as Mr. Wynn was subjected to this, and the only explanation I can come up with as to how he ended up here is that it had to be some sort of punishment being doled out by “the Coca-Cola company”.