I’m really an old-school and just read this in the newspaper the paper ones, I like to read those, already have a screen on my front all day.
So Tarantino got a new Western for Christmas not a novelty, the cast looks good (Madsen, Roth, Russell, Jackson, and Bruce Dern, so life’s good.
The idea that the western genre is death just makes me laugh, in today’s industry there are no genres, studios don’t produced films like in the last century, the only existing genre of today is the sequels of anything.
But what makes this project really special, is that the maestro himself Morricone is going to create an original soundtrack, for the first time in forty years for a Western (a US produced one), it’s not done, and I already want to buy it.
Looking at the pics from post production, The Big silence comes to mind, if so a good thing would be calling Nastassja Kinski to the cast, even if for a cameo part only.

Nice to hear re Morricone.

What was his last soundtrack? The Thing? Definitely curious about this one. I think the movie is supposed to be more of a take on Cut Throats Nine.

Just saw the trailer. I can see the resemblance to Cut-Throats Nine. I didn’t expect him to make a snow western. I’ll have to wait and see the whole thing but it looks like it might be a bit minimalist like Reservoir Dogs. If they can pull off the same kind of drama as RD then it might actually be pretty good.

Just saw the trailer. I can see the resemblance to Cut-Throats Nine.

Yeah, kind of by this trailer. https://www.youtube.com/watch?v=nIOmotayDMY

It kind of resembles Shoot the Living Pray for the Dead too. At any rate, I’m exceedingly excited to see this one, looks gorgeous.

I am hyped for this movie. That’s all I gotta say. I’m excited to hear Morricone’s score, but besides all that it looks like it’s going to be so much fun.

Watched it last night. I’ll probably post a more substantial review sometime next week if I’m not too drunk but I’m “between PCs” at the moment until Santa throws a new laptop down my chimney on Friday (I’m currently bumming a quick go on mrs.caress’ laptop) but I thought it was excellent. Better IMO than Inglourious Basterds (2009) and Django Unchained (2012) and not all that similar to either of those either. Far closer in tone and even in structure to Reservoir Dogs (1992), despite the period setting. “Reservoir Dogs 1880”, if you like. It’s very theatrical, very sparse, taking place as it does largely in a single setting (much in the way that Reservoir Dogs largely takes place in that empty warehouse). Indeed has similarities too to Shoot the Living and Pray For the Dead (Vari, 1971) as Mickey noted above. Not that he’s copied it at all, just in terms of setting, pacing, slow building tension et cetera.

Mike’s review is not up, do read it and share it: The Hateful Eight review

I have heard The Hateful 8 soundtrack and I must say it is a disappointment to me. I have been a great fan of Ennio for nearly 50 years and so I was really excited to hear a Western score by him after so many years. Unfortunately, like with the Thing, he has gone for atmosphere at the expense of melody. We all know that a Morricone Western soundtrack is something to savor so it is a real disappointment to find that the maestro has opted for a subtle ‘dramatic’ score. There one memorable track, Letter To Lincoln (or from Lincoln), but that’s it. I am so disappointed. Ennio Morricone’s western soundtracks are the love of my life so you can probably guess just what a letdown this soundtrack is. Seems to me that when he is contracted to write a soundtrack for a US movie, he really moves away from the beautiful, moving and exciting music he writes for European films and goes for atmosphere over melody and emotion. I know there’s The Mission but that seems like a one-off in terms of writing a more European soundtrack.

Anyway, do not mean to p*ss anyone off, just wanted to express my disappointment at what may very well be Ennio’s last western soundtrack.

Not on the ost cd, but used in the actual film of The Hateful Eight we have unsued score tracks from the John Carpenter film The Thing. Know the tracks well as have the ost to The Thing.

Yep, recognised one of the tracks from The Thing. Or at least, from the menu page of my old The Thing DVD. 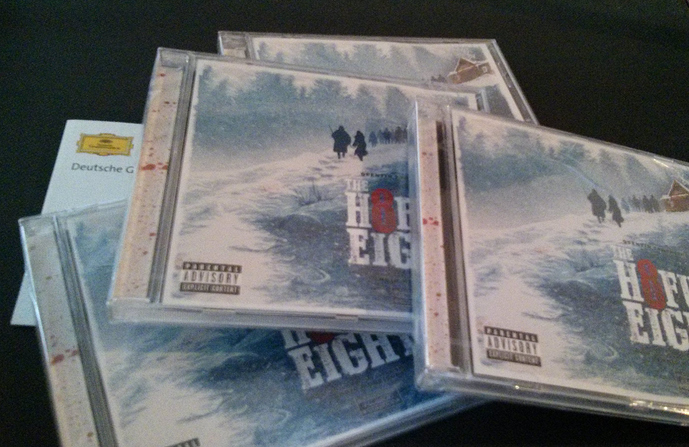 Like with The Thing, Morricone’s score is barely used. When I bought The Thing soundtrack LP (back in the day) I was surprised that there was far more music on the album than had been heard in the movie. Same with Hateful 8, one or two tracks in the movie and after that, nada. I love Ennio but what possesses him to abandon his wonderful melodic music when composing for US movies I just can’t figure out. I will say though that I had forgotten one US movie where he created a masterpiece (INHO), for the The Untouchables. Maybe it was De Palma that encouraged him to write such a score but I am just amazed that Tatantino, who stacks his movies with Morricone tracks, did not encourage Ennio to write a score that anyone who is familiar with his music would be able to say ‘That’s Morricone!’. Oh well, still got lots of Dan Savio and Leo Nicholls music to listen to.

Playing a bit of the soundtrack and talking 70mm Ultra Panavision Hateful Eight Roadshow - Stream at whivradio.org - Like the Spaghetti Western Show On Facebook

Interesting take on the soundtrack. I love it. I reviewed it on Nischenkino.de and have yet to translate that

The Legend Of Ennio Morricone And Dice-Master Quentin Tarantino

Or: How I learned to stop worrying and love the original score.

This was not my kind of movie. Maybe I’m a wuss, but the film ended up being far too nasty for my tastes. It was beautiful to look at, though. The cinematography was just magnificent. There was so much creativity in the photography. The acting was excellent. The story at least was really engaging. It just left me feeling empty inside because it was such an incredible visual experience.
When I first heard the score, I couldn’t decide whether I liked it or not. I like it more now.

Film is ok, but way to much talking for a western for me. Prefer my westerns a little leaner in that aspect.

Director Quentin Tarantino accepted on behalf of The Hateful Eight.