A vocalist of extraordinary talent, Dell’Orso used her Soprano voice with a
three octave range to provide haunting, mostly wordless vocals to a number of
Spaghetti Westerns. A frequent collaborator of Ennio Morricone, she contributed
to Once Upon a Time in the West (1968), The Good, the Bad and the Ugly (1966),
Fistful of Dynamite aka Duck you Sucker (1971). She also contributed vocals
for other composers in such memorable Spaghetti Western scores as His Name was
King (which was also heard in Quentin Tarantino’s Django Unchained (2012) and
the Grand Duel (1972). Outside the Spaghetti Western genre, Dell’Orso has lent
her talents to films such as Dario Argento’s The Bird with the Crystal
Plumage (1970) and Mario Bava’s Danger: Diabolik (1968).
Year of Induction: 2019 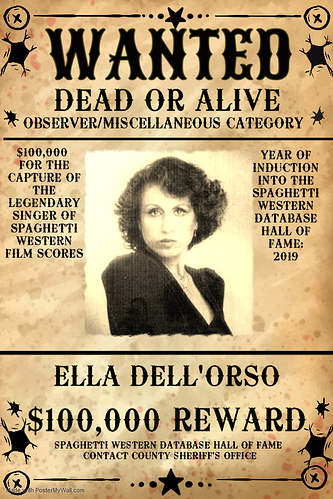 Hey guys. Sorry for the delay. We will start voting for this year’s inductee’s later in the month. Here is the bio for last year’s inductees. I still have to do one more. I changed it up for the wanted poster this year hope yall like it.

I’m surprised Claudio Undari (better known as Robert Hundar) isn’t in the Hall of Fame as a supporting actor. He’s always been a good henchman and bad guy, and even made pretty good Anti-Heroes. Has he ever been considered for nomination? If not, I’d like to nominate him as long as nominations are still open.

From what I remember. He narrowly missed getting inducted for a couple of years. There’s actually quite a few guys that are still not in that are surprisingly not in yet. But that’s why I only like to induct two people per year, so it keeps on going.

Can Christy be nominated?

Sure Seb I’ll accept that as a nomination for this year’s vote. I think she was another one who was on the ballot in previous years but fell short in the voting.

Working on Franco De Gemini’s bio at the moment…

I would vote for her for the incredible singing on the The Big Gundown soundtrack’s title song. I sounds a bit like an anticipation of the early Heavy Metal era in the beginning of 1970’s with Deep Purple and Uriah Heep whose lead (male) singers were of a similar caliber.

I’d like to advance Casaro as a nomination this year, hoping his selection to represent the genre in his illustrations for Once Upon a Time in Hollywood gives him a bump in votes.

Some of my favorite Casaro posters for the spaghetti genre include Bandidos, Fort Yuma Gold, Death Sentence (the image that was chosen recently to grace the cover of Ultra Wild West: The Art of Italian “Spaghetti Western” Film Posters), Price of Power, They Call Me Trinity, My Name is Nobody,

You can see the work that went into the posters in the sketches recently offered for sale by the artist.

Consider a vote for Renato Casaro in the Contributors category!

He is best known for his haunting and iconic harmonica playing on the filmscore of
Once Upon a Time in the West (1968). De Gemini’s contributions can be heard
on as many as 800 film scores, including many Spaghetti Westerns, collarborating
with a who’s who of film composers. These films include The Good, the Bad and the
Ugly (1966), The Grand Duel (1972), a Bullet for the President aka The Price of
Power (1969), They Call Me Trinity (1970), and a Fistful of Dollars (1964). Outside
of the Spaghetti Western genre, he also made musical contributions to Lone Wolf
McQuade (1983), and West Side Story (1961). He released several albums, founded
his own successful and long running record label, Beat Records, and released a
memoir in 2006. 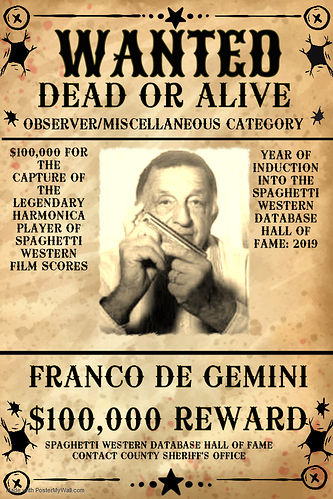 We can start nominating this year’s inductees now. Please only one nominee per person. Thanks.

We can start nominating this year’s inductees now.

Sorry I jumped the gun!

As I have been on about before, more women!

And for starters, Chelo Alonso

The Previous suggestions will count as nominees. Go ahead. I’ll give it another week before voting starts.

As in previous years, I nominate Henry Fonda in the lead actor category.

Here are the nominees. You are allowed to choose any two of them.

Only one will be inducted this year, so please choose carefully.

Choose any TWO of the following:

Voting starts now!! You have until March 1. Please choose two of the above!

Please choose two of the above!

3. Henry Fonda who is a brilliant leading actor in both Once Upon A Time In The West and in My Name Is Nobody (number 2 and 5 respectively on my top SW Top 40).

But I nevertheless do like Claudio Undari in Ramon The Mexican (number 17 on my SW Top 40) and A Hole In The Forehead/A Hole Between The Eyes (number 33 on my SW Top 40).

Claudio Undari made a big contribution to the genre, even if many aren’t familiar with him by name. He gets my vote.

Plus Chelo Alonso for only 3 SWs (that I know of) is still an icon for her appearance in GBU, as the best looking farmer’s wife in film history.

My votes go to Henry Fonda and Christy.