A PISTOL FOR RINGO

A FISTFUL OF DYNAMITE

Fun pics, tell us a little more about this place in Almeria, I’m sure most of us have not been there!

Cool pics Yodlaf, I’m envious of your trip. Some of the then and now shots on the DVD extras are a little confusing, but yours are spot on. You must have had a good guide, or a portable DVD player with you.

Fun pics, tell us a little more about this place in Almeria, I’m sure most of us have not been there!

I went there in summer 2005, it was the first time i had ever left England!!!
The landscape is incredible, for some it may just be boring mountains but when you notice areas from the spaghettis you love you feel like your in your own little world.
After trawling through the internet for months on end a friend of mine found out some of the approximate areas where some of the westerns were shot, armed with cameras and a rucksack full of screenshots we went on our search.

Sometimes we had to go out over a mile or so into desolate mountain ranges, most of the time for some reason there are warning and keep out signs but why should that deter you (if we got caught trespassing we could have just said that we didn’t understand the signs).

The one that got me the most excited was when i found the side of the mountain top where Milian hides in “The Big Gundown”. I climbed up a high mountain to get a good look at the valleys and didn’t realize how high i’d climbed! I’ts ok getting up the mountain, it’s just getting down again.

In a place near San Jose is the windmill from “A pistol for Ringo”, and if you look down the hill from there to the right you can see the House that the film is set it (locked gates and dogs roaming around!!), and not far away is the Rock on the beach near the start of “Blindman”, incidentally it was there that i dislocated and broke my arm.

Also no trip to Almeria is complete without visiting Mini Hollywood and Texas Hollywood, (now called Fort Bravo i think)

Very hot as you would imagine but i loved every minute of it (apart from that painful afternoon!).
For me it was the holiday of a lifetime but to some of my friends who have been all over the world it was like, “You’ve only gone to Spain”, if only they knew 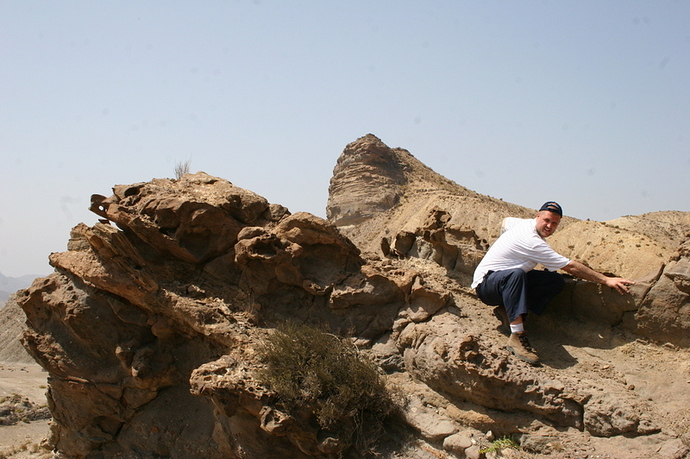 A friend of mine just moved back to Spain, so I’ll now have a place to stay when I visit. It’s sad to see highways and development running through and over these places. Hope more can be saved…

Excellent stuff mate.
I hope to do a similar trip next year so I might get some details of these locations off you some time if that’s ok.

I’ve been to Spain in both 2003 and 2005. If any of you are interested please don’t put it off. Many of these sites will not be there in 5 years. The mission church from THE GOOD, THE BAD AND THE UGLY is in terrible shape now. In 2003 we could walk on the roof and in 2005 it had collapsed. In 2003 the historic museum house used for the back of the Rojo’s home in FISTFUL OF DOLLARS still contained the wall where Clint shoots the rope which causes the door to fall on Mario Brega’s head. In 2005 this was gone and is now a restaurant. With the agricultural growth of this part of Spain some sites are covered in those God awful plastic greenhouses. Now there are wind machines everywhere. Thankfully many of these sites have been preserved by being repaires and used by local merchants, as hotels, homes, stores etc. but they do not look the same as in the films we love. Again if you want to see the SW locations go before it is too late and all you’ll find is rubble.

I’ve been to Spain in both 2003 and 2005. If any of you are interested please don’t put it off. Many of these sites will not be there in 5 years. The mission church from THE GOOD, THE BAD AND THE UGLY is in terrible shape now. In 2003 we could walk on the roof and in 2005 it had collapsed.

When i went there the roof had already collapsed, if i remember rightly the floor is quite red in this area.
As for them greenhouses, your right they are everywhere and some of them huge (seen clearly on the way in on the plane)

anyone been to the arch from once upon a time in the west? I can only post some pics of monument valley but i have to make screenshots from the DVD to see if i made anything that matches leone’s shots…

i thought the arch was in Arizona but it’s either somewhere I didn’t go to, or it’s in Almeria

I’m think the arch was in the states.

There is a “mock” arch at Texas Hollywood (i got excited when i saw it from a distance and thought it was the genuine article!). I reall should have taken a pic from the other side of it because it’s a terrain background

I drove to see the remains of a brick Roman arch which survives just north of Monument Valley on the road towards Mexican Hat. To judge by the number of broken bottles and crushed cans decorating the site, Carlo Simi's arch from Once Upon A Time In The West has become the party location of choice for itinerant bikers.

Even though by all accounts little of this arch remains today (it was a cheaply manufactured film prop after all), of all the locations in SWs this is the one place I'd most like to visit. Perhaps because IMO it's the location of the most shocking ending to the greatest film ever made. :)
Admin (Sebastian) November 21, 2015, 10:34am #17

damnit, so i was there and didn’t visit it… I thought it would be either in Almeria or IN monument valley… damn…

Even though by all accounts little of this arch remains today (it was a cheaply manufactured film prop after all), of all the locations in SWs this is the one place I’d most like to visit. Perhaps because IMO it’s the location of the most shocking ending to the greatest film ever made.

Yeah, that would be an amazing location to visit. It would be almost spell-binding, I think…

most shocking ending to the greatest film ever made.

I totally agree and would very much like to visit it as well.

Here are a few of my Almeria location photos. Of course, click the thumbnails for a slightly larger view…

Location used in GOD FORGIVES–I DON’T!, BULLET FOR THE GENERAL (QUIEN SABE?), and a few more.

One of my most favorite places on Earth! The hacienda El Romeral near San Jose, Almeria, Spain. This location was used in many Spaghetti Westerns including A PISTOL FOR RINGO, JOHNNY YUMA, THE BIG GUNDOWN, I WANT HIM DEAD, BULLET FOR THE GENERAL, TEPEPA (with several “modifications”), and many more. It was also used for the main hacienda in the short-lived Zorro-like TV series QUEEN OF SWORDS.

I have hundreds more photos…but I think this is more than enough for one posting!