The film has plenty of violence and never becomes dull in that regards. There’s not much present story wise, and nothing for character development. This kind of thing doesn’t bother me much though, as long as the action is moving and interesting to watch- which it was for me. Jeff Cameron is cool as always. One aspect that bothered me in this, as well as other Fidanis, is the extended scenes of people riding horses- while I’ve seen worse from Fidani, it was still present and I’m assuming this was one of his favorite ways to fill time.

About 12 minutes in there’s a scene where a guy’s getting the crap beat out of him. The scene is shot in the first person view, which I have noticed being done in other Fidanis also. I quite like it that way, it at least makes the fight interesting to watch. And even the fights in Fidani’s films that aren’t filmed in the first person, seem to be superior to most fights in other spaghettis - there’s always a much rougher edge. Back to this specific scene though, we are treated to a Fidani trademark: the cut to an out of place scene from a completely different film. This guy’s being tossed around outside, and suddenly we’re inside a cabin and some other guy is getting shot. This is the kind of thing that most people probably hate about Fidani, but I personally enjoy watching for these edits and laughing when they happen. Check out this scene here: http://www.youtube.com/watch?v=4zDVt1nPqFg

This was the only glaringly bad edit I noticed in this one, and despite it, there were many techniques employed which I found redeeming. Something simple but nicely done, like when Sartana is reading a note, and it transitions from a closeup on the note in Sartana’s hands to the note in the hands of Fidani himself(as the mayor). Plenty of spaghetti camerawork, in fact the camera work has a distinct exploitation feel to it over a simply spaghetti styling. The camera is constantly moving with everyone, and moving into closeups, as opposed to the usual, quick zoom in from a static, steadily held angle. There are scenes such as after being gunned down by Sartana, and after Sartana has rode off, circling around the dead body and then zooming in on the face. The fact that Sartana had already rode off from the scene is particularly notable in creating the exploitation feel for me, not only is the camerawork doing this in the scene, but there’s not even any real reason to be showing this… Its already shown Sartana kill the guy and Sartana’s even left for other things.

Some other scenes of note include Sartana riding into face a villain, looking quite menacing. Another where a girl is kidnapped and the men are circling around her, laughing like maniacs. Again the camera is moving with them, cutting between her and them, and the effect is well achieved. Some first person shots from the gun’s point of view, which I always like and are executed nicely. At one point, Sartana manages to use a tiny mirror on his necklace to see a guy very far behind him, which is quite unbelievable but still pretty cool.

Another aspect which pertains to all the Fidani films I’ve seen, lots of exaggerated death falls. Every single guy that gets shot outside of the duels(and there’s lots of them) goes flying off a roof, balcony, cliff, or just the ground itself- they simply fly through the air spinning around if there’s nothing to fall off of. This can be annoying, but while I’m not a fan of this particular spaghetti cliche, the falls seem to, like the fist fights, work better for Fidani than most.

Film could of got more points from me, had it ended the opposite of what it did. Overall, a satisfying Fidani experience and not even a bad spaghetti experience- granted you may want to have some alcohol on hand. Of particular note, especially since much I’ve commented on pertains to the use of the camera, Joe D’Amato did the camerawork for this film.

Version viewed was an old, crappy VHS source, one of the worst I’ve seen quality-wise but still watchable.

Interesting details, excellent writing
If we want to load it up - and it seems a good idea to do so - we need a small synopsis of the film

And I had to read this sentence at least twice to understand what you wanted to say:

<< And on the subject of fights, even the fights in Fidani films that aren’t filmed in the first person seem to be better than most fights I’ve seen in spaghettis- always a much rougher edge.>>

<<And even the fights in Fidani’s films that aren’t filmed in the first person, seem to be superior to most fights in other spaghettis - there’s always a much rougher edge>>

Good call, I agree with you and changed the sentence. I had trouble formulating exactly what I wanted to say at a couple points… thanks for the tip.

I tend to avoid synopsis in my reviews, just because I usually skip the synopsis when I read reviews… If I haven’t seen a film, I prefer not to know the entire story and if I have seen the film, well, its kind of un-necessary reading. Although I do enjoy when a reviewer combines commentary on the film into the synopsis, so maybe I’ll rework it at that angle.

I tend to avoid synopsis in my reviews, just because I usually skip the synopsis when I read reviews… If I haven’t seen a film, I prefer not to know the entire story and if I have seen the film, well, its kind of un-necessary reading. Although I do enjoy when a reviewer combines commentary on the film into the synopsis, so maybe I’ll rework it at that angle.

I know what you mean, but when I read a review of a movie I haven’t seen, I want to know, or at least have a clue what the film is about. Is it a revenge movie? A looking for the treasure movie? Is it serious? Or is it a comedy ? For this reason I keep a synopsis short and - most of all - always avoid to give too much away, that’s so frustrating for readers …

This movie is in my BOTTOM 20 list and I classify it as a Trash-Western.

My comments about the movie from different threads:

“Big plus for ‘Sartana’s shadow …’ : Fidani’s taking part himself, only a few minutes though !!!
(It’s Fidani’s second worst I think)”

"Today ‘Passa Sartana … e’ l’ombra della tua morte’ (Sartana - Im Schatten des Todes) will be on German television (Tele 5) ! Don’t know it yet but I don’t expect too much of it 'cause it’s one of Fidani’s trash-westerns featuring Jeff Cameron (as usual) !!!

Well, I was right !!! That flic is pretty bad, actually among the worst by Fidani ! I think that speaks for itself !!!
It’s also one of the worst SWs ever !!! Bad filming material, even worse actors (SW clowns Jeff Cameron and Dino Strano, by the way Fidani appears for a few seconds himself, the only moments the movie is interesting), no story
!!!"

I didn’t think it was boring at all… actually I watched it late at night when I was already very tired and was never tempted to fall asleep.

What’s so bad about Jeff Cameron? I think he’s a pretty good SW actor… especially given the material he’s working with in films like this

When it comes to Fidani regulars, I do prefer Hunt Powers though… I actually think he’s one of the coolest looking SW guys ever, usually as “Django” in the Fidani films

Is Jeff cameron the same Jeff Cameron as in Today it’s Me Tomorrow you? In that one, he is handsome but from what I’ve seen of his other movies, he aged REALLY fast! He got ugly really quickly.

To many scoops perhaps…

Does anyone know if there are any decent quality versions of this available, whether VHS or DVD? The one I had was watchable, but a transfer from a very old and poor quality VHS, with lots of noise.

It looks good for a Fidani!

It wasn’t that good tho. It was awful. It’s simply build up on useless scenes with carachters that you only see one time in the whole movie (for some reason Sartana wants revenge on Dino Strano’s carachter and Fidani doesn’t bother telling us why). One of the worst SWs ever!

new version completed, thanks to Bluntwolf’s sharing a German TV recording with me 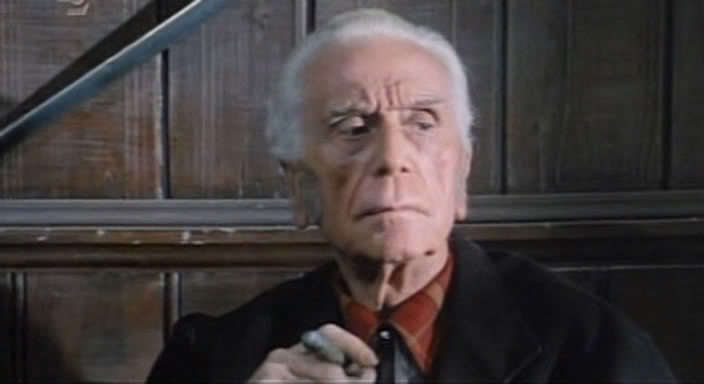 Good write up indeed, autephex. Just finished watching it and tend to agree on alomst everything. About the guy above: Is that really Fidani himself? I can hardly imagine, as he was 55 years old when he shot the film. This guy looks 80 or something.

Anyway, this is an ejoyable film with not much plot. But it’s entertaining throughout. Cameron is good, great screen persona for such films. And there’s something about Gori’s music that makes horse riding scenes tolerable. It just fits perfectly.

I don’t think you have been paying attention then. Sartana has a bounty on his head of $12.000 He can clear his name by wiping out the Randal brothers’ gang, so he does it. There’s your motivation.

When I was young, and read similar texts (in cinema or elsewhere) I used to imagine they were about me:

Probably one of the reasons I became a western fan

About the guy above: Is that really Fidani himself? I can hardly imagine, as he was 55 years old when he shot the film. This guy looks 80 or something.

No, that’s not Fidani! Our good ol’ friend Dick Spitfire is the guy who suggests to hire Sartana. The one with them bluish glasses (if I remember right about the color!?) Unfortunately, I’m not able to put up screenshots…

Well, I’m with Bluntwolf on this one. If I ever got around to it this would be in my bottom 20. Not because it’s cheap but because it is so bodged together. No real story to speak of and the characters are so one dimensional, if the wind picked up they’d all fall over.

Highlights for me were the final mud fight scene. That was actually pretty cool. And the fun factor of spotting the glaring continuity errors. The mexican bandit being beaten up for instance. Now he’s wearing a bandana, now he’s not, now he is. ;D

The version I watched I suspect was brother autephex’s fan dub (where is he these days by the way?) so the quality was actually very good as regards picture etc. It was the film itself which was a lemon. Still, now that I’ve ticked it off at least I have the satisfaction of knowing I don’t have to go back there.

I once recorded this one on german TV. Unfortunately the end was missing. At the end of my recording “Sartana” is fighting with a baddie in a muddy sandpit. What happend after that?

SPOILERS
If I remember right the baddie found a gun that he pointed at Sartana but Sartana managed to point back at him when he was just about to shoot. So the baddie got shot himself instead. Then Sartana went to good ol’ Dick Spitfire and got his reward, then rode away in the sunset.

[quote=“Silence, post:19, topic:1613”]SPOILERS
If I remember right the baddie found a gun that he pointed at Sartana but Sartana managed to point back at him when he was just about to shoot. So the baddie got shot himself instead. Then Sartana went to good ol’ Dick Spitfire and got his reward, then rode away in the sunset.[/quote]

So the movie has a real end that makes sense? Not bad for a Fidani!