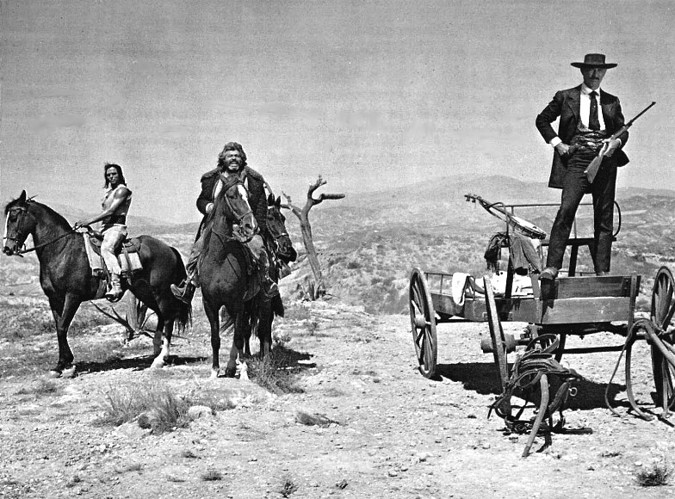 SAB33784×580 172 KB
Sabata is what can be termed as a “Happy Western” or a “Feel-good Western”. This movie stands in contrast to the earlier Spaghetti Westerns, which saw the amoral anti-heroes drifting along the West in the search of gold . This also doesn’t wear the voice of the people’s Zapata Westerns, where the morality of revolution and the corrupt socio-economic system around it was to be examined.

Sabata sits well with its own sequels, the Sartana series (though these are generally less cheerful), and the likes of They call him cemetery.

A comical tone, bordering on the slapstick variant, is oft present here (Garrincha, the parlour sequences etc.), the hero has almost superhuman skills (Sabata’s coin tricks) and he seeks to do the right thing. Also, the good guys and their crew is safe and sound through the film (even if there are a bunch of close calls). 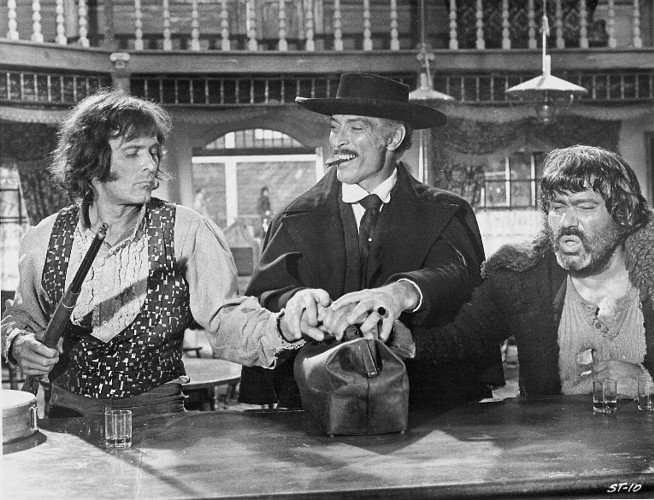 Even when Sabata (Lee Van Cleef) isn’t looking to save the town from the villains, as would’ve been the case in a classical western, he does help everyone by becoming a thorn in their way. He is seemingly present at all moments when the evil could run away with the game and stops them at the right time. Again, even though his motivation is to earn some cash, it isn’t the money that is to be robbed from the bank. He’d rather blackmail the villains to earn it. 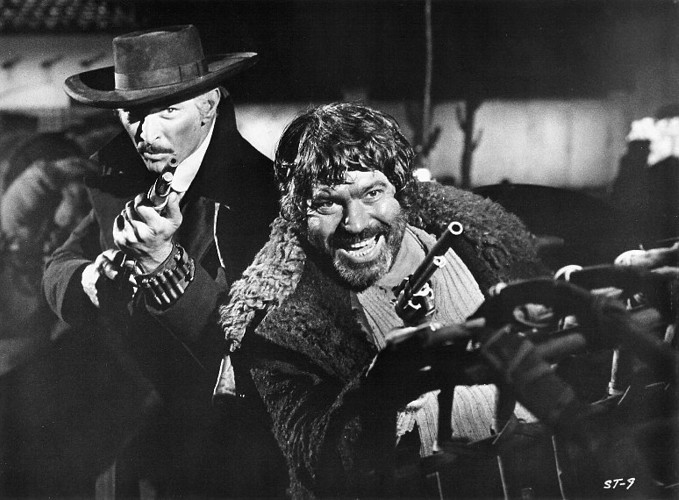 Sabata has on his side two loyal allies, Garrincha, a crude war veteran who is skillful with guns and knives, and Alley Cat, a mute acrobat. The alliance though based on monetary gains has a familial touch to it. The three form a strong comradeship and look after each other.

The movie begins with a bank heist, which is carried out under the orders of the town’s reputed trio of- Stengel, Ferguson, and Judge O’hara. It is the same night that Sabata arrives and quickly figures out what is going on. He brings back the stolen money to town and then sets about blackmailing the villains who carried out the heist.

It seems like there was a special effort put in to create Stengel, who is shown to be a cold-blooded killer with his special room to trick unsuspecting enemies (or allies) into a trap. Besides, he is also seen reading Thomas Dew’s writings (Dew was a pro-slavery advocate), and talks about how superior men, like him, will always get better of inferior individuals. His villainy is informed by conduct, with him treating those around him as his inferiors.

He is also the most relentless of the trio, who figures that Sabata won’t stop with his demands even if they pay him off. 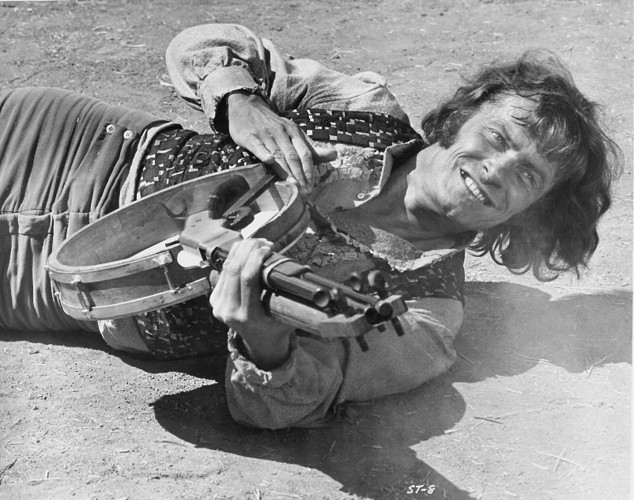 But the most formidable character other than Sabata himself is Banjo, played by none other than William Berger. The mysterious bard, who played with Sabata once back in the day, is a keen observer of events. He is built in the mould of classic Spaghetti Western bounty hunters, and is always in the hunt for money. However, he goes one step beyond some of his predecessors, by actively crossing the moral line, instead of merely pushing it for monetary gain.

Given his skills (which are established through a guitar gun duel), both sides approach him for assistance. Sabata, won’t mind another sharpshooter on his side, while Stengel and co. know that Banjo might be their man after a number of their plans against Sabata fail. Banjo’s lust for gold is the primary determinant in this matter. However, he is not faithful to any particular side. 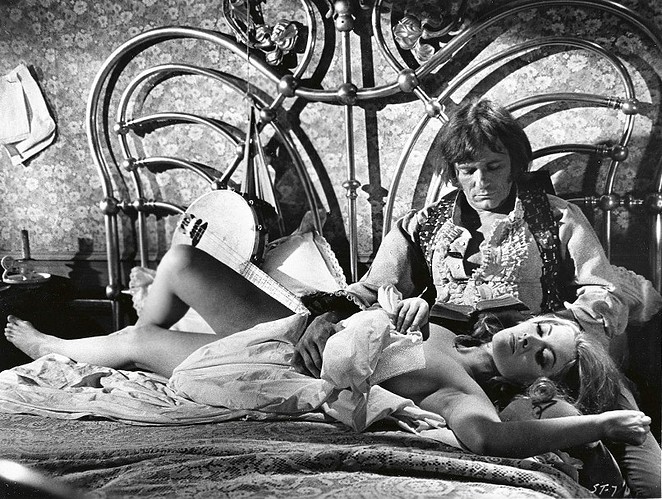 In many ways, his construction and the way Sabata deals with him is an indictment of the amoral bounty hunters of early Spaghetti Westerns. Banjo is dismayed at the fact that Sabata returned the money to the army, believing that he has changed. His sole motivation is money, and he even leaves Jane (Linda Veras), who is madly in love with him and tries to concoct schemes for his benefit, by telling her that he’s just a traveller who’s passing through.

While Sabata is also a mysterious drifter, he is to be drawn in opposition to the younger man. He is closer to the lord (thus, imbibing some form of religious morality), helps his friends, and fights against the evil men.

In a way, Banjo is a perversion of For a Few Dollars More’s Manco. While, Manco developed a close bond with Mortimer, and helped him in his duel with Indio, Banjo doesn’t care even if he joins hands with the evil and participates in their crimes. Sabata, on the other hand, is a happier construction of Colonel Mortimer. Unlike, Mortimer who has revenge rather than gold on his mind, Sabata aims to earn some good money from the villains. 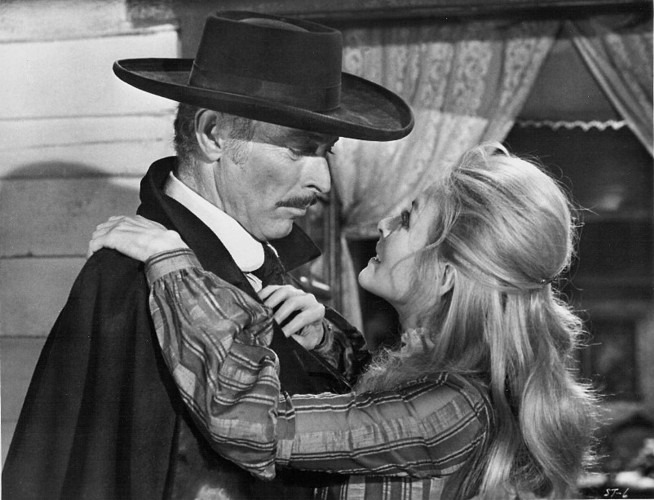 Sabata, thus, becomes a more conventional good guy in the Spaghetti Western universe. But, given this is the world of Spaghetti Westerns, his goodness is bound to follow its rules. So, he confronts the bank robbers, and kills them all, even when they haven’t fired a single shot. (Though, they would’ve if they had an opportunity; their brutality has already been established in the opening sequence)

Many things about Sabata seem to be a build-up towards the final showdown, where Sabata and his gang infiltrate into Stengel’s den. The judge, who always wanted to run, finally goes off, Sabata’s coin-flipping skills which had been shown earlier help save his life, Sabata’s allies, especially Alley Cat, become of best use in this conflict, and Banjo’s unreliable nature also comes into play.

While, not as remarkable as the Sergio Westerns, Sabata has its own feel-good charm to it. It is an enjoyable fare with some sequences like Banjo-Sabata face-off in the saloon, Stengel doing away with Oswald, and Sabata trapping Stengel’s men, standing out among the rest.

You could tell Lee Van Cleef was having a blast making the two Sabata films he did. Not sure if he considered Sabata his best SW, but definitely one of his best on set experiences.