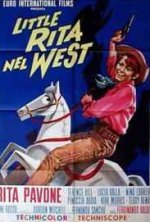 I saw this film for the first time few days ago. The version I saw was in german language so I didn’t understand much about the dialogue but that didn’t bother too much as the film is mainly songs and musical numbers.

I have to admit that I enjoyed this film very much but probably most of spaghetti western fans will hate it. There’s lots of inside genre jokes like Rita fighting with Clint Eastwood look-alike and Django (dragging a coffin with his hands crushed). Hilarious title sequence too which is in Pink Panther-style animation. Oh, and Rita Pavone is quite cute.

I need to see this in english some day or preferably in italian with subtitles.

I would be intrigued to see this film myself some time, despite its reputation of being bad! Where did you track it down from, Bill?

It’s available on DVD in germany

Found it in English from Cine City

Yeah, I have the german dvd. Isn’t there also a japanese release? Is that one in english?

I might be wrong regarding the japanese DVD but I donÂ´t think it has english audio, only italian.

Little Rita was released on VHS here in Sweden in very good-looking english version (except the songs that are in italian) with the on-screen title “The Crazy Westerners”.
Great quality and WS.

This movie is so bizarre but itÂ´s damn good.

because the page is framed and it sucks (believe me

btw i updated the page with the german dvd link, but it is german audio only

[quote=“Sebastian, post:7, topic:106”]because the page is framed and it sucks (believe me

btw i updated the page with the german dvd link, but it is german audio only[/quote]

Thanks for the info Sebastian.

I’ve got the movie. It was released here as “The Crazy Westerners” and all songs were removed to make it a “serious SW”. The final result is, of course, owful.
The complete version is shown on a local TV channel very oftenly and as Bill San Antonio says it’s quite funny and very enjoyable. I really recomend this movie more that other SW that want to by comedies and they’re not.

pay attention to the bogus cover:

I have the Japanese DVD; perfect picture quality, Italian audio only, BUT with English subtitles. This is the one to own. And I do. I LOOOOOOVE this one

The flic will be on German TV tomorrow night.
I haven’t watched it yet and I’m curious about it.
Will it really be as funny as everybody is writing ???
I’ll let you know my opinion in a couple of days !!!

I find it pretty afwul and not funny except for a few inside jokes like Django. The title sequence is great though and features the best song in the film. Unfortunately I don’t understand lyrics since all the songs are in Italian and the German DVD doesn’t subtitle them. I just don’t understand how a dvd label can release a musical without subtitling the songs. Are these songs subtitled on the Japanese DVD? If so can someone rip the subtitles and post them?

It’s not funny like hehehe, but it’s amusing and charming, a really odd little spaghettiwestern

I agree with you Silvanito !!! Watched the version including the songs. Unfortunately there were no subtitles so I couldn’t understand what they were all about !!!

Just viewed this one.

Can see why people would not like this one, but is a fun movie to view if in the mood for something a bit different.
Bizarre moments in the film and Terence Hill looked a bit embarrassed during one of the musical numbers

.
Rita Pavone taking the ‘piss’ out of Django and Ringo was interesting.

Oh and we have Gordon Mitchell playing an Indian

This film has all the elements I would usually dislike in a spaghetti but I found myself strangely enjoying it. True, I watched it in two parts as I fell asleep half way through but it I did like it nonetheless. It has a certain charm I suppose despite its clumsy humour, bad songs and lack of acting talent form Rita Pavone. Still, I liked a couple of the songs (the theme song is annoyingly catchy in that way) some of the gags were quite funny, Rita was cute and Gordon Mitchell found his perfect role; an indian who doesn’t say very much.

It’s fun that even Fernando Sancho is in it

Rita Pavone’s singing voice isn’t that pleasant though, but the songs are still ok

The theme song is catchy

Are there subtitles for the singing scenes in the WHAM/Televista DVD?

Mmm, I have seen your face before, are you by any chance Albert Band ?