“Which do you prefer? Desert snakes, vampire bats or the black lizard of darkness?”

Django Kill… If You Live, Shoot! (1967) is as much horror as Spaghetti Western. Or perhaps it’s an experimental art film. Whatever it is, it’s just as likely to be appreciated by fans of horror and horrific exploitation as by spaghetti western fans. Many fans of spaghetti westerns, in fact, do not seem to know quite what to make of Django Kill, at one moment a decidedly standard western, the next a twisted, sadistic nightmare featuring—not only bats and lizards—but death by molten metal, a gruesome explosion of man and animal parts, and a pale, mysterious madwoman locked-up behind an iron-barred window. And sadly, horror fans remain largely unaware of this film’s dark, smart and horrifyingly nasty appeal.

Further frustrating appreciation is its misleading title. Django does not appear in Django Kill, nor is he even referred to. Fresh off the international success of Sergio Corbucci’s Django (1966), the famed character’s name was merely tagged onto the title in an effort to better sell it to unwitting American audiences. Unsurprisingly, director Gulio Questi disliked the change, preferring the direct translation of the original Italian title, If You’re Alive, Shoot! Speaking of translations, please note that—unless otherwise indicated—all quotations in this review refer to the improved subtitle translation provided with Blue Underground’s 2012 blu-ray release. 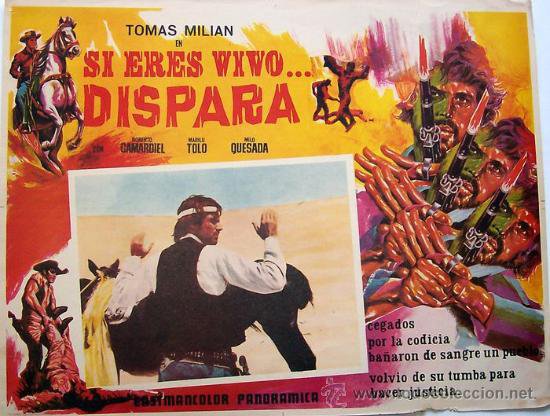 Tomas Milian stars as “The Stranger”, a handsome half-breed who is revealed clawing his way out of an open grave as the film opens. Believing him to have returned from the dead (and perhaps he has), a pair of Indians take him under their care, asking only that he eventually share with them any special wisdom he may have gained on the other side. In the meantime, they will aid him in seeing the cruel palefaces who put him in his grave soon laid to rest in one of their own. To this end, the Indians melt down the modest cache of gold they find The Stranger to be carrying, and from this forge several bullets. Gold bullets “deadlier than lead”, they note (adding, “Go deeper” in the dubbed version).

In a flashback, we learn that The Stranger and these nasty gringos were former partners. Along with several of The Stranger’s Mexican compañeros, they ruthlessly robbed a Wells Fargo stagecoach of its gold and murdered a regiment of Union Army escorts—literally catching them with their pants down—while they bathed. However, the American bandits quickly dismiss any intention of sharing the gold with “dirty Mexicans”, claiming it was already enough having put up with “the stench of your greasy skin”. The half-breed and his friends are forced to dig a mass grave before each is shot dead…

…and this is where the movie takes a wide left turn. I first saw the film in NYC as part of a week-long festival of spaghetti westerns, and while I enjoyed several of the other features, it was not until I arrived at this point in this particular film that I realized that nothing else in the festival would ever compare.

Cut to the band of murdering gringos, each one meaner and uglier than the next. After surviving a long trek across the desert with little or no food and water, they arrive at a quiet western town. Too quiet. Something in this town is even uglier than they are. The air is filled with dread, with evil. In the dubbed version, one of the bandits remarks, “Even God wouldn’t stay here”. And indeed, there is no evidence of anything holy in this town.

The first thing the men see is a lone naked child, standing in a puddle of his own urine. Nearby, a girl maliciously pulls the hair of a young boy, while spitting in his face (in the dubbed version, it is inexplicably made to appear as if the girl is merely taunting the boy, not spitting on him.) Another girl, crying for release, is observed being violently squashed under the boot of an abusive uncle.

What kind of hellish place is this? “I don’t know what the white men call it,” one of The Stranger’s Indian companions later explains. “Our people used to call it The Field of Anguish” (or rather ridiculously, “The Unhappy Place” in the dubbed version). Is this place—in fact—Hell? Perhaps The Stranger truly is among the walking dead? “…you can’t leave this town as long as you still have bullets”, the Indians explain suggestively. “You have many left to shoot”.

Hell or not, the Indians lead The Stranger to this godforsaken place, knowing that the American bandits had to have passed this very same way. By the time the trio arrive, however, the fate of all but the leader of the double-crossing bunch will have already been soundly settled by the decidedly inhospitable locals. 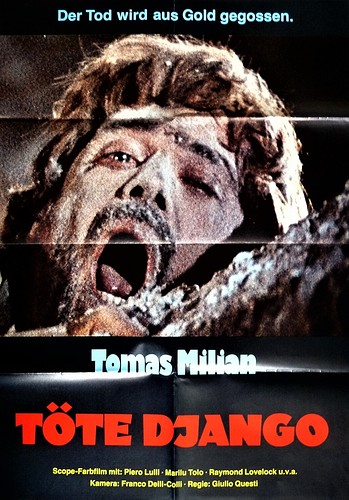 Rather pointedly, when one of the local hombres first spies the gold, the camera leads his eye from the saddlebags in which it is stashed to a wonderfully suggestive close-up of a horse’s ass. Questi claims this cowboy, dressed almost fetishistically in metal studded black, is—along with his identically dressed companions—representative of Italy’s fascist militia against whom he fought as a partisan youth. And it is from this civil war experience that the director’s seemingly pitch black view of mankind appears to have been derived (in his short film, Visitors (2006), Questi – playing himself – is visited by the ghosts of soldiers he killed, who beg him to also kill himself so that they—and he—can all be freed from "the hell of being remembered”).

Clearly, Questi and his co-writer, Franco Arcana (Last Tango In Paris [1972]; Once Upon A Time In America [1984]) had something more than the making of a straightforward western in mind. As with their earlier giallo collaboration (1968’s Death Laid an Egg, a film centered around a factory that strives to chemically breed headless, wingless chickens, throbbing blobs of soft meat that the collaborators grotesquely compare to modern man), the two gaze deeply into the twisted soul of man, and in Django Kill they see only racism, greed, sadism, criminal sexuality, and – worst of all – horrifying indifference. Indeed, when a man has his belly pumped full of gold bullets, the townsfolk lay him out for emergency surgery, not to save his life, but to retrieve the precious metal (“I’ve searched for gold in vain my whole life, and he’s full of it”). When the black-clad cowboys take a pretty teenage boy hostage, they invite him to share in a perverted orgy of food, after which they turn their increasingly sinful appetites toward the rape of his innocence. There’s also the manipulative, uncaring bar girl who unashamedly cuckolds her man when he dares to hesitate—only briefly—to put his son’s life at risk in their deadly gamble for cold-hearted, selfish gain.

In the end, creators Questi and Arcana leave us with a sobering final comment on the horror and obscenity of human existence by returning us to the children, two of whom are seen growling and distorting their faces in a competition to be acknowledged the more grotesque (“I’m uglier than you are”, one of them adds in the dubbed version). Either reading speaks to the same concern: When even our children have the desire to be monsters or freaks, hope for humanity is lost. And with this the attentive viewer recalls an earlier scene in which one of the townsfolk says of the woman who will be his undoing, “She wouldn’t hurt anyone… She’s like a child”.

*An earlier version of this essay first appeared in “Hidden Horror: A Celebration of 101 Underrated and Overlooked Fright Flicks; Kitley’s Krypt, 2007” (Amazon.com) and appears with the publisher’s permission.

Excellent review. Django Kill, If You Live Shoot was actually one of the first Spaghetti Westerns I saw and I really disliked it on my first viewing. I recently re-watched it, though-after having seen a lot more SW’s-and enjoyed it a lot more. I think the film is better appreciated by people more familiar with the Western genre since it breaks so many genre formulas.

As an aside, I’ve only seen the English dub of this film which is horribly done on a technical level, but I think adds to the theme of the film since the voices often feel like they’re parodying archetypical western characters.