After spending many years tracking down hard to find spaghetti westerns in hopes of discovering that forgotten diamond amongst the coal, one can become jaded. Even when a never before seen title is found, the initial excitement of the discovery is quickly replaced by a growing sense of skepticism as memories of the lumps of the ever growing pile of coal flood the brain.

Then comes that rare occurrence. That time when, as soon as the opening frames begin to roll, the feeling of hope begins to well inside once more. Maybe…just maybe…another diamond, though perhaps small and lacking perfect clarity, has been discovered. It doesn’t always turn out to be the case but when it does, it is enough to fill even the most jaded of spaghetti western fans full of joy.

Such was the case when I recently had the pleasure of seeing Pago cara su muerte for the first time. From the opening moments of the film when Marshal Johnny Silver (Wayde Preston) approaches a shack and finds it’s resident working diligently to put the finishing touches on a couple of graves, I immediately began to sense that perhaps director Leon Klimovsky might have in this instance risen above the level of aptitude that I have typically come to expect from his films in the genre. 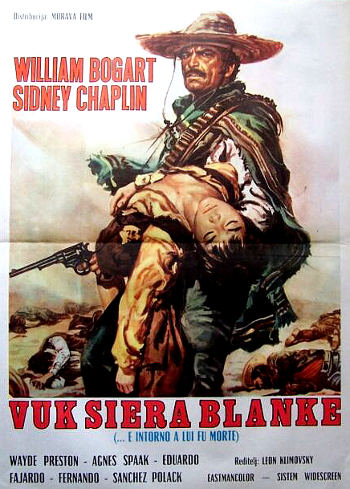 Silver lets the old man know that he is in pursuit of notorious outlaw Martin Rojas, portrayed by Guglielmo Spoletini in this case as William Bogart, and learns from the farmer that the man he is chasing is responsible for the dead bodies in the graves.

As the marshal approaches the next settlement, he hears gunfire in the distance. Silver rushes into town where he initially finds nothing but a dead man lying in the street. The close-up the viewer is shown of the carefully staged actor provides an all too realistic and almost haunting feel to the moment.

The sound of a horse’s hooves pounding into the dirt breaks the silence and Silver turns to find Rojas riding out of town at full speed. The marshal runs to his horse and retrieves his rifle but it is too late to get off a shot as the outlaw disappears behind a building at the edge of town. Silver then surveys the street, discovering two more grotesquely posed dead men, one of which lies submerged face up in a watering trough.

With the threat gone, scared townspeople begin to emerge from the buildings and Silver makes his way toward the local saloon. He finds two more dead men lying on the floor inside, one of which is surrounded by poker chips and scattered playing cards. A table lies on top of him. The other lays on the step leading up to the bar and once more, both actors have been posed for maximum realism for the haunting close ups.

The carnage leaves the viewer feeling as if they will inevitably come face to face with the most vile villain to ever grace the screen of a spaghetti western.

Raised voices outside the saloon sends Silver back out onto the street where he discovers the townspeople about ready to hang a wounded Mexican named Yuma (Fernando Sanchez Polack) they insist helped Rojas with the carnage. Silver steps in to stop the lynching and takes the wounded man to the jail for questioning.

As Yuma begins to tell his tale, everything the viewer has come to believe about the outlaw Martin Rojas gets turned on its head and the table has been wonderfully set for a truly memorable plate of spaghetti.

Rojas was once a simple man who led a group of poor Mexican farmers until they were forced to abandon their land after resisting an attempt by a rancher to take it from them forcefully, echoing a common basic political theme so often found in the spaghetti west. In this case though it simply serves as a device, providing the background for what is to become the eventual storyline which is of an emotional tale of sacrifice. While hardly typical in the genre, it works well in this instance and produces a story that is both detailed and compelling. 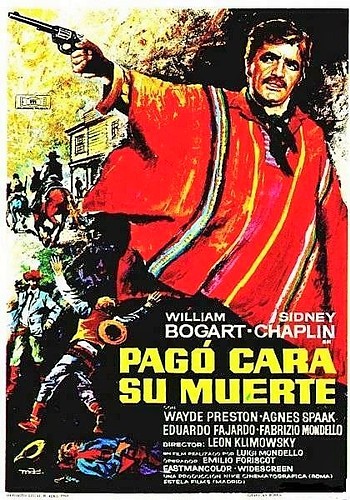 The farmers return to Mexico and Rojas organizes them into a notorious band of outlaws that cross the border at will to commit robberies before returning back across the Rio Grande. As the number of their robberies begins to grow so does Rojas’ fame and the amount of the reward offered on his head.

A posse led by Sheriff Red Stacy (Sydney Chaplain) pursues the outlaw to his stronghold shortly after he has pulled off the biggest score of his career. When word arrives of the posse’s approach, the bandido farmers scatter to the wind - except for Rojas and his loyal companion, Yuma. Stacy enters the outlaw’s home and discovers why the pair elected to stay behind. The outlaw is oblivious to the sheriff’s arrival and appears to be in shock as he holds his wife’s hand who died shortly after giving birth to their son.

Rojas is ultimately sentenced to 20 years in prison while Yuma receives ten. As for the baby, the sheriff and his wife (Agnes Spaak) take the newborn to raise as their own. Ten years pass and just as Yuma has paid his debt to society, Rojas learns that Red Stacy wants to legally adopt his son who has been named Juan. This proves to be too much for the father to bear and he escapes from prison to retrieve his son.

Yuma accompanies Rojas to find the boy but once they do the wanted outlaw begins to have second thoughts as he finds Juan living a life that he knows he will never be able to provide. Klimovsky does excellent work at this point contrasting the world the father lives in from that of the son. While Rojas undoubtedly resides deep within the world of the Italian West, the boy lives in the much more idyllic West that is so often portrayed in the American version. When Rojas follows him home from school, he finds the family celebrating Juan’s birthday with a cake covered in candles after he has received a pocket knife and encyclopedias as gifts.

Rojas reluctantly comes to accept that he cannot in good conscience drag the child from the safe, secure, and happy life he is living. Despite the father’s best intentions, Juan is eventually thrust headlong into Rojas’ world when he is kidnapped by an old associate named Trevor, portrayed by the typically villainous Eduardo Fajardo, who tortures the boy in an attempt to have Rojas reveal the location of the loot from his final and greatest score. Rojas is left with no choice but to sacrifice everything in an attempt to save the son he has never known and deliver him safely back to the only family the boy has ever known.

What truly makes this movie work on all levels is the performance of Spoletini who walks the tightrope between caring father and hard-boiled killer with the greatest of ease, portraying a far more complex character than the stereo-typical stoic protagonist associated with the genre. While Rojas is a commanding personality that certainly inspires loyalty and affection from those around him, he also possesses a darker angry side, born from the hatred of the gringos, that even finds him at one point threatening to end the life of his ever faithful companion, Yuma. Despite all of the qualities the character possesses that puts the viewer squarely in his corner, there are also aspects of his personality that are uncomfortable and make his forays into cold-blooded killer completely believable. While primarily known for his turns as sidekicks or villains, Spoletini made the most of his casting as the lead and ran with the opportunity, showing tremendous range in the process.

With the presence of Preston, Chaplin, and Spaak (whose billing rises far above her screen time), this film undoubtedly boasts a fine supporting cast and all play their roles well. Also of note is the performance of Fabrizio Mondello who plays Juan. One of my personal peeves in a Spaghetti Western is when a child is cast in a prominent role as it typically takes away from the grittiness of the movie but, in this instance, that wasn’t the case. The fact that his performance was in no way annoying makes it worthy of recognition in itself. 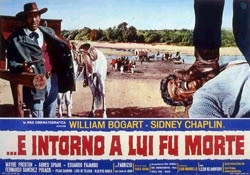 In the end though, it is Fajardo, as is often the case, that stands out above the other supporting players. He approaches the role of the even-keeled and amiable yet completely despicable Trevor with complete joyful abandon. The difference in his demeanor when sharing a shot of tequila with a friend versus when he is grinding a lit cigar into the skin of a child is negligible at best.

Klimovsky weaves an engaging and emotional tale with this one but still manages to dish out a totally delicious helping of violent and harsh spaghetti goodness in what is arguably his best work in the genre. This is not to say that the film is without flaws as the decision was made to abandon the linear narrative and instead catapult the viewer back and forth through time without offering a proper segue. This takes a bit of the luster off of the film as it proves to be extremely disorienting and were it not for Spoletini’s hair color changing from jet black to salt and pepper, it would be at times impossible to tell initially what place in the timeline the scene was taking place.

Composer Carlo Savina provided the music for numerous entries in the genre and the semi-haunting style he was so adept at fits well with the film’s tone. Though not particularly memorable in the long run, the score accomplishes the job of setting the mood well and perfectly enhances the excellent cinematography of Emilio Foriscot whose work in this film rivals what he accomplished in the underappreciated Bandidos (1967). 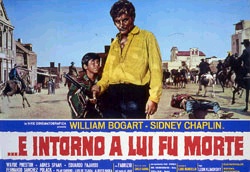 Though not perfect, this is certainly a memorable entry as the movie offers a far more complex, unique, and emotional story than one normally finds in the genre. This is not a typical production line movie, made modestly to turn a quick profit, but one that was made with care and attention to detail which in itself makes it a rare, though not entirely flawless, diamond and a must see film.

Superb movie, watched it a few weeks ago on YouTube, really enjoyed it… And Bogart’s performance was superb