(Apologies if I’ve missed a thread for this one; I did scroll through all pages.)

A rare chance for a Euro-Western character actor to play a leading role, Tierra Brava is something of a triumph for Giuglielmo Spoletini/William Bogart.

Usually cast as a loutish or comedic sidekick, and often a Mexican, the swarthy Bogart is given a meaty role here and doesn’t disappoint. Again he plays a Mexican, but this time his character is a social bandit, Martin Rojas, driven to crime by the machinations of the gringos and paying a high price for his crimes.

The plot is melodramatic - while incarcerated, Martin’s baby son is brought up by a well-meaning sheriff - and takes liberties with logic - as in the way Martin is reunited with the boy after he escapes from prison - but Klimovsky’s direction is disciplined, if uninspired; the young actor playing the son never irritating; and the tragic tone never compromised by unwelcome comic interludes.

There are added bonuses, including an especially unpleasant and effective performance by Eduardo Fajardo as Martin’s treacherous accomplice, but the main reason for watching is to observe an unsung actor relishing his chance to shine. Bogart/Martin never asks for sympathy, never shies away from his dark urges, and offers the rare sight of a protagonist growing as a person - yes, a bona fide character arc!

Not a great film by any means but it does enough to stand out from the pack.

To be honest, i did think this one was pretty damn great!

I do remember liking this one. Must view again though as view alot of crap in between the better ones

Is it really that good? Gotta get this then. I’m not big fan of Klimovsky’s westerns though. Challenge of the McKennas is the only really good one I’ve seen so far.

This is pretty good Bill (although a year has passed and maybe you’ve seen it?)

It starts well - with a Federal Marshall looking for Mexican bandit Martin Rojas, and an old scrote who’s burying a couple of folk saying summat along the lines of “These two were also looking for Martin Rojas – don’t know who they was, but looks to me like they found him.”

This leads into trumpets and credits, to be followed by the Marshall finding carnage and claret all over the town he arrives in, in a moodily filmed piece.
If the beginning bodes well, the ending is brilliant – a great shootout that neatly ties everything up and somewhat surprised me.
In the middle it drags a bit, but includes great nastiness from Eduardo Farjardo as a dangerous slimeball called … Trevor - who teams up with our man for a bankjob.
As mentioned, the kid ain’t even annoying, but still gets Trevor’s lit cigar stubbed out on his nipple for his trouble.

It’s a story of the Mexicans having to stand up for themselves when gringos try and steal their land – but it’s quite a melodramatic story, as Starblack has mentioned. Forced into a life of crime and going to prison for it, effectively leaves Rojas’ new baby boy an orphan after his wife dies – and this film spends a lot of time on the bonding and relationship between the two after his escape. The melodramatic focuses on the turmoils Rojas has about how to deal with his young son, who’s been brought up a gringo, after they are thrown back together by circumstance. As you can imagine, this could have been very cheesily done – but the kid handles it well, as does Spoletini/Bogart as the vengeful bandit ‘Wolf of Sierra Blanc’ who just wants to be a father.
As I’ve mentioned, this did seem to drag a bit at times, but it was definately worth it for the finale, and therefore comes recommended.
You’ve gotta be in the right mood though – I seem to remember starting this one before and leaving it for more ‘traditional’ spaghetti fare.

The version I saw had picture quality that was quite ‘soft’ and was taken from a Vook (Visual Book) Japanese vid – complete with Japanese subs.
We haven’t got the database entry mentioned yet, so here it is…

Pretty much a drama western. William Bogart in the main role has a chance to display alot more acting ability than usual. The guy just does not have luck in the big picture of life. Shame really as he is not really a bad guy.

Spoletini’s performance does impress in this. Sad he didn’t other chances as a lead because from this evidence he was clearly capable of more than he was usually allowed.

The itself is OK without being spectacular but well worth a viewing.

Pretty standard western this was. Good beginning and then the flashbacks kicks in to tell the story, but it’s all done decently. I liked (Guglielmo Spoletini) in the lead role and (Eduardo Fajardo) is not bad either as a mean villain.

Forgot what I thought about this one to a degree. Some good moments in this, and some scenes reminded me of other Spaghetti westerns, which in this case is not a bad thing. Nice unfolding drama really, and nice to see the scenes that did not have english audio have english subtitles, so the film did not appear as disjointed this time.

I have the soundtrack to this, and some of the tracks sound like they belong in a Italian horror film. Great opening theme aswell.

Had forgotten the theme belonged to this film before I recently viewed again.

SWDB and IMDb release date (5 March 1969) can only be wrong, because public showing was authorized by the Committee for the Theatrical Review on 23 February 1968.

Also, the correct runtime should be just under 107 minutes (all ages admitted, uncensored).

Is it possible that it passed censura in 1968 but was first shown a year later?

Anything is possible, but considering that the movie was released in early March this is extremely unlikely.

Sapevano solo uccidere, for instance, was approved on 22 February with registration number 50946 (for Pagò cara su muerte the number is 50948) and released on 10 March 1968.

Now we can rule out 1969 with total certainty, I just found out a daily newspaper review dated August 10, 1968.

Can someone please change the year in the thread’s title? Thanks in advance! 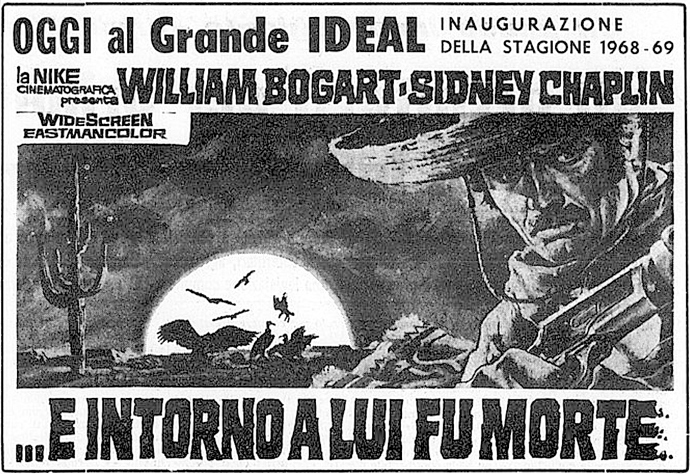 Can someone please change the year in the thread’s title?