Here is the Link to Su le mani, cadavere! Sei in arresto aka Raise Your Hands, Dead Man, You’re Under Arrest
http://www.spaghetti-western.net/index.php/Su_le_mani%2C_cadavere%21_Sei_in_arresto

To start with I watched the german version with the title “Sando Kid spricht das letzte Halleluja” (Sando Kid says the last Halleluja). The german title isn’t that bad cause at least the name of the main character is in the title. The movie beginns with a sinister scene after a battle during the civil war. The music and the scenery is quite scary. Aldo Sambrell appears as cold blooded Union Captain Grayton who shoots survivors of the confederate army. On a confederate ambulance station he meets a young medic (Peter Lee Lawrance as Sando Kid). Grayton gives him his colt and orders him to kill the injured. Sando Kid denies and with the help of a friend he survives. After the war Sando Kid becomes a Texas Ranger and is send to his home town Springfield to bring the citizens law and order back. There he faces an old enemy with his gang but don’t worry an old friend and the bounty hunter Dollar are helping him.

IMO a solid SW average with a good music score. The movie is quite bloody and entertaining. It’s a more sinister movie but there are at least some comedy elements (gay bartender …) and not to forget the beautiful ladies. Aldo Sambrell is doing a fine job as villain Grayton and Peter Lee Lawrence is just the sunburned dandy like SW Hero. Most of the scenes we have already seen in other SW. Of course there are better SW but IMO there are more worse.

An interesting note about the director of this SW I found in Bruckner’s SW Book: Sergio Bergonzelli directed the movie but Leòn Klimovsky is credited as Director. ???

Not the only one for which Klimovsky got a directing credit without directing.

Few Dollars for Django and Reverend Colt are two more. Klimovsky name was used to fulfil conditions for the spanish co-producers.

I think this starts off well, but gets pretty boring as it goes along… Peter Lee Lawrence is good though.

Yes, the 1st scene promises much, but the rest of the film can’t live up to it. Still more the film doesn’t use this war sequence later. You can cut it out without changing the film, the conflict between Lawrence and Sambrell and the action which results out of it, wouldn’t differ if they haven’t met before. Only a few dialogue lines had to be changed.

The second half of the film is indeed boring. The only interesting character in this SW is the Ranger named Dollar.

I watched this one yesterday. I a bit disappointed, because I like Lawrence.
THe movie starst quite promising with Sambrell as the mean yankee, who shoots the helpless greys. It’s an impressive start to a SW. But then it gets worse every minute. A few examples:

An alright SW with as mentioned too many comic elemtents that nearly ruins the film.

Most of the scenes we have already seen in other SW.

Do you mean that there are recycled scenes ???

Below average film, pre-credit sequence is great but doesn’t have anything to do with the rest of the film which is confusing. Final showdown that suddenly turns into slapstick is completely out of place and ruins the film for me. 2 stars. They should have included Garko’s Holy Ghost to KOCH Halleluja box instead.

Just viewed this one again.

I did not make much of this when I first viewed via a VHS copy, but improved when I viewed the Koch media release. This time I viewed an english audio fandub of a Spanish disc which comes across even more light hearted than the Koch release because of the dubbing. But even so I like the film more every time I see, as I have become a PLL fan.

But even so I like the film more every time I see, as I have become a PLL fan.

Oh I forgot the gay barman come across very camp in the english dub version, and got the impression PLL was flirting with him in one scene ???.

Oh yes I forot about him. First I thought he was only gay in the German version, but on the second sight I realized, he was really gay.

PLL seems to play with erveyone’s hearts in this movie

I bought the Divisa DVD a quite while ago, but it was yesterday that I finally give it a shot. The first scenes gave me some ideas of a gritty revenge, which unfortunately is not the case. Also thought that this Venezuelan - Espartaco Santoni - should have a bigger part in the movie. Despite that, I liked it.

I like it a lot, my favorite from Klimovsky.

I enjoyed this one well enough but it really does seem to be two separate movies forced together. The opening parts are straight forward gritty typw we all like and then becomes more comedic as it goes on and the final shoot out is just plain awful. Not sure what they were thinking there.

Despite that I like PLL well enough to ignore it’s flaws for the most part and it was a big plus having Sanbrell in a major part. And a full on mean SOB one at that. Wouldn’t go so far as to recommend this one to anyone but I have seen a lot worse.

Pretty much agree with all above. I watched the disc from the Halleluja box (previously I hadn’t even realized it was there, as I didn’t even know of the tenuous link) - but was pleased with the quality of the print.
The beginning showed a dark promise - the end shootout was far too comedic. Inbetween, it fluctuated between the two camps. And yes indeed, the barman was very camp - but his inclusion didn’t annoy me at all, I actually looked forward to seeing this lighter comedic part, and it looked like he enjoyed playing it.
Dollar, the bounty hunter/ranger was as over the top as he should’ve been, and looked great in leathers, tooth necklace and earring, 8) (and also looked like he could ‘come out’ - in a Judas Priest-y sort of way) at any time as well. It didn’t need him to go all ‘comedy’ later on for certain. Did Loredo Robledo survive this one Phil? I think he may have - (*much I’ve already forgotten from last night - which says something maybe?)
It was a shame Helga Line (Maybelle) was wearing a nice modern brassiere - if only for the sake of historical accuracy ::).
Overall - it was an enjoyable time spent on a mediocre film that was a spaghetti-by-numbers storyline, with a few interesting twists added.

[* Forgotten, but not from a surfeit of cider, as may sometimes be the case as his reverence is abstaining from the amber fluid at the moment - well, at least until the wretched gastric flu departs. Anyway, I don’t think this film would have got more for an appley-infusion anyway … so …

3 stars, (rounded up from half marks for Dollar’s earring and Maria Zandrea (Mary Zan)/Leonor’s suede outfit (her only film btw?). ] 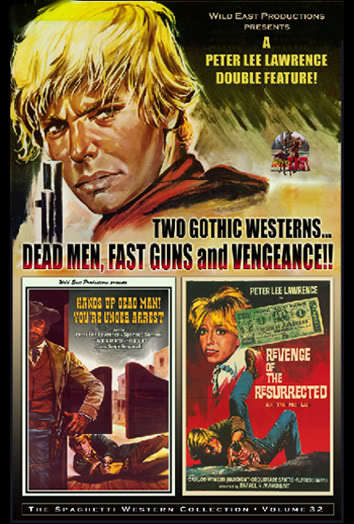 I watched the Wild East dvd of this this afternoon.

Peter Lee Lawrence stars as The Sando Kid whose mission is to put a stop to vicous land grabber Grayton (Aldo Sambrell), he is helped by Dollar, a Bounty Hunter who is also a Captain (played convincingly by Venezuelan actor Espartaco Santoni).

The pleasing to the ear score is by Alessandro Alessandroni which pops up quite often through the film.

Here are some screenshots I took from the Wild east dvd. 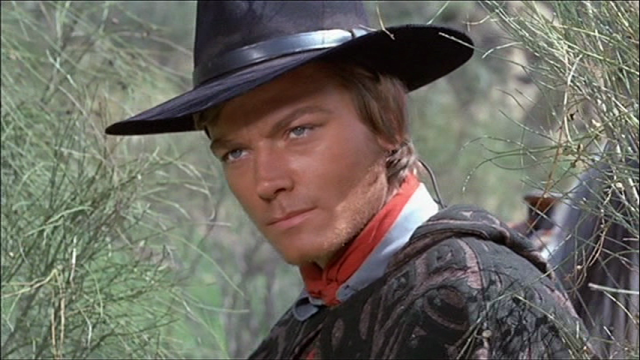 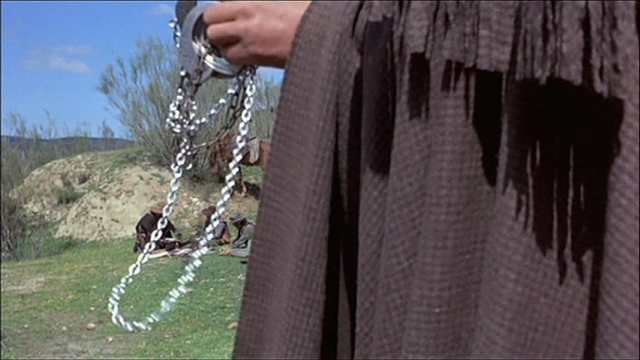 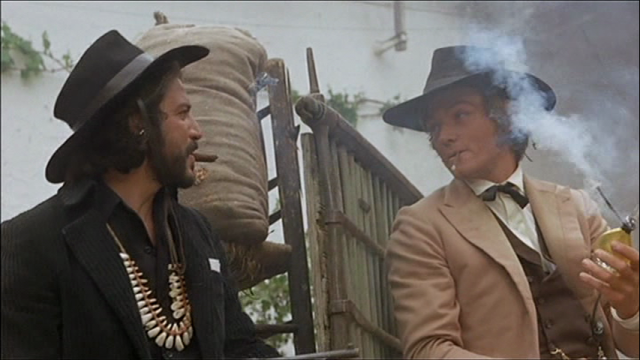 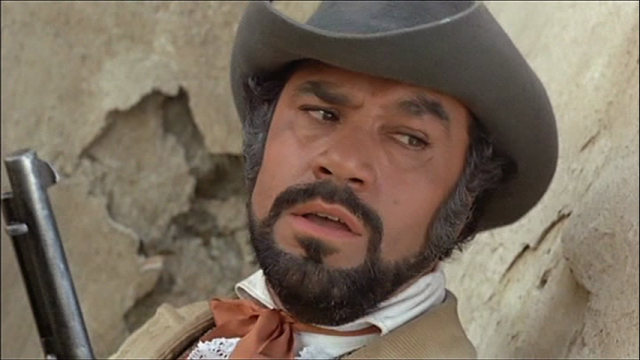 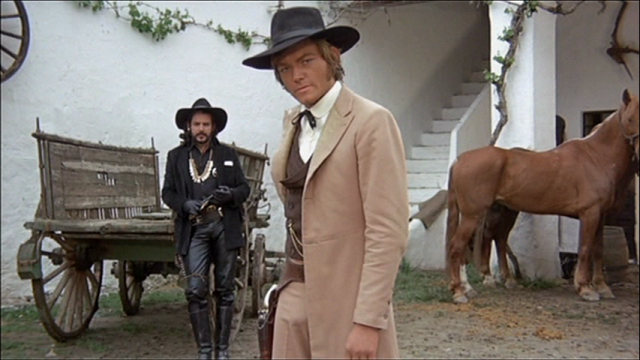 Hi!!
I’m making an investigation for the University about this movie, and I can’t understand very well the lyrics in the song of the opening.
Can someone help me and transcribe for me the lyrics on it??

P.D.: I’m from Spain, and that’s why I can’t understand it very well. Thanks

Watched this last night on the Wild East double feature DVD. I know I’ve seen this before but can’t rememeber If I’d already watched the DVD or saw it from a different source. While there’s a good amount of cheese, I do really enjoy the frequent gunplay and the score is nice.

What I really wanted to ask is about the sped up scenes. There are several scenes on the WE disc where the frames are moving way too fast, but the audio remains at normal speed. I first noticed during a fight scene, and thought that maybe it was just filmed this way although it looked terrible, but then it kept happening in other scenes also. Has anyone else noticed this? Was it actually originally edited like this, or is this an error on the WE transfer? Its basically several scenes where the characters are moving around much faster than normal, like the frames have been sped up.

Like already mentioned the film just cannot substain the interesting opening scenes. What we have that follows is a mixture of camp and scenes trying to match the first scene. Even so I do not mind this one, and I have viewed it countless times. Probably because I do not take the film seriously most of the time and that music score just gets in your head.