Has anyone seen the second of Fago’s three SWs that he made between “Per 100,000 dollari ti ammazzo” and “O’Cangaceiro”?

It’s in the database (http://www.spaghetti-western.net/index.php/Uno_di_più_all’inferno) but I couldn’t find a forum topic.

I liked this one. One of the better George Hilton-movies for me. The movie starts excellent with the evil German Gerhard Herter blowing innocent mexicans away with his sniper-rifle as far as I remember whereafter one of the best title tunes in a spaghetti western ever, Forgive and not Forget sets in. It was released by Global Video a one or two years ago I think.

It’s not a bad movie and the score by Nico Fidenco is catchy. I picked up the Global DVD and it’s not bad, but on FarEast Flix it was the priciest out of the rest of the Global releases. George Hilton is good and the action is well-staged. But I think the best aspect of the movie is Paolo Gozlino’s character, Meredith. I found it somewhat refreshing to see him cast as a good guy for once!

A quite enjoyable one, but not up there with the best SW of George Hilton. 2.5/5

A very good film, with a nice balance between geniality (it’s a George Hilton vehicle, after all) and gritty SW elements.

As already noted, Gerard Herter and Paolo Gozlino bring a lot to the table, with Herter bordering self-parody as the villain and Gozlino dovetailing nicely with Hilton. Good role for Carlo Gaddi as well, as one of Gozlino’s underlings who earns Hilton’s ire.

The first half is mostly a comedy with a robbery scene thrown in. Not a bad comedy i have to add - the jail scene for example is quite hilarious. It turns into serious revenge movie in the 2nd half with Herter as suitably nasty villain. Hilton is in good form and we also get some nice music and landscapes. 8/10

If anyone has the Global release of this and would maybe be interested in a trade, please send me a pm

Hybrid comedy/serious Spaghettis often get a bad rap for just that. Undecided nature. But in this film , I think it helps the film (it was never a subject which bothered me.) The first half is straight up comedy. Pretty funny or atleast entertaining comedy. Obviously used to set up the realtionships for the second half which is what makes the whole film work. Has many good scenes and not a lot of huge action scenes but spread out gunfights. I like the film quite a bit.

This film seems pretty good. Fago was one of the typical SW directors that made one masterpiece (though I’ve not seen any) and nothing else. And some directors maybe made too many.

This film seems pretty good. Fago was one of typical SW directors that made one masterpiece (though I’ve not seen any) and nothing else. And some directors maybe made too many.

Yes, I wish Fago had made a few more forays into the genre. I like all three of his entries. They’re better than the bulk of Mulargia’s, for example.

Can’t find my copy of this one. But I have made a few changes at the data base which are maybe wrong.

Can someone please check what the opening credits say for music, story and screenplay.

Can’t find my copy of this one. But I have made a few changes at the data base which are maybe wrong.

Well I know that it is Nico Fidenco and not Gino Peguri which supplied the music. The soundtrack was released by GDM a couple of years ago.

Yeah, I think meanwhile also that Fidenco made the score.

Not so much answers, please.

I checked the credits onscreen and Giusti@s dizionario and the story and screenplay would seem to be correct as per our database.

@Stanton:
Just thought I’d say that it’s a very admirable practice to check our DB so ften for mistakes and I thank you for it.

Not so much answers, please.

Hmm, is this the right frame? 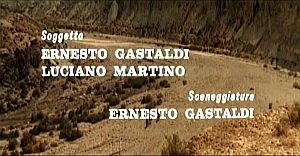 Not really sold on this one.
It has plenty in it for me to like but somehow misses the spot. (Boot Hill anyone?) George Hilton and Gerard Herter, Nico Fidenco, Giovanni Fago…all these people have done work I like. But this one just falls a bit flat. Especially in the first third. It improves as time goes on but everyone involved has done better work.
An ok time passer. Nothing more.

This has two new releases this August. I am wondering whether to get the US Wild East[/url] release or the German [url=http://www.amazon.de/Django-Melodie-Todes-George-Hilton/dp/B003WM7XJE/&tag=italowestern-21] MCP http://www.wildeast.net/new-releases.htm release. Does anyone have any recommendations?