In the words of Mr. Reeves: whoa…

What a great spaghet, the best from titles I haven’t seen in a long time. A lot of great dialogue moments in this one, starting with “and pour one for him. I’m going to have to be drunk to listen to this.”

The guy with dynamite strapped to him at the end.

The old man coffin maker has some of the best lines/scenes out of any of the old guy characters in spaghets.

The whole ending is excellent.

Definitely a new addition to my top 20.

Glad you enjoyed this one. good film and Harrison’s best I believe.

The twists and turns in this film are relentless to the point where you come to suspect that the creative team behind it decided to shoe horn every possible genre element into it they could. ... To have them all working at once in one story and still have some room left for a couple of original touches too takes some doing and I take my hat off to them for managing it so well.

Nice review Phil and I really agree with your opinion here. This aspect really stood out to me, particularly by the ending where I was laughing out loud just because it managed to keep the ball rolling so well. ( The few beers I enjoyed during viewing had nothing to do with it, I’m sure

I also really liked the early bar fight scene with the glasses, which I mentioned the (paraphrased) quote from in my above post. Harrison really delivers his punches well here, and has the effect of being a real tough guy that is totally in control. The quick draw shooting that follows is equally well performed & shot.

And I’m also agreed on the general sense of dark humour that permeates throughout the film, its a really nice touch that has a lot to do with why I liked the film so much.

Definitely directed and shot with skill, there are several scenes which I want to screenshot just because they are perfectly framed for a spaghetti.

I can’t believe this one doesn’t have higher status in the spaghetti community.

Gave it 6,5/10
Some time ago I viewed it. Don’t remember much, except the glasses.
I’ll do a Google translate of the review if you like.

Yeah, I wouldn’t mind seeing what you have to say about it.

Will do. Tried with the iPad, but using that strangely allowed me to only use so many words. Up within the hour.

Google translated review (pretty shitty translation, but what the hell):

Stan , a bespectacled guy , rides into a town . There has just committed a bank robbery in the shoes of a Mexican gang is pushed . Want to eradicate the Mexicans . Actual controllers Of course the feelings entirely mutual. There seems to be a variant of A Fistful of Dollars go ontspinnen , when Stan goes for both gangs to work. Fortunately it is not as trite together and show Stan to have his own agenda …

Spaghetti western that does its job fairly , without taking the decision to have too many resources . In particular, a number of elements in the violent atmosphere make the picture worth it. Protagonist Richard Harrison carries the film with his performance . It is one of the better roles from the extensive work of the actor .

nb spoilers
In many ways , the film is standard . Particularly annoying , pissed out , the film does little good music . Moreover, a number of complications clumsy and put the end to my taste too bland . A sadistic revenge tour for the murder of his brother seems to be because Stan’s motivation. Justifiable , but that’s ultimately proves Stan the genius behind the bank robbery . After one gang to completely wipe out and send with pockets stones , the other on the road it seems good to have for each other. However, it was all see through a woman , that he is stuck . For a character that thinking of everything , he even has a arsenaaltje glasses with them in case there is yet another of his nose is beaten , Stan has never viewed that good . A silly comic twist at the last minute that totally fits the grim atmosphere of the last half hour . Overall, however, I am cautiously optimistic about the film .

I viewed the film yesterday and I enjoyed myself a lot. I didn’t like the soundtrack, and I had an impression that the song lyrics were a little stupid, but it suited the film well. The direction is good enough and so are the performances. It is funny though how the Mexicans for instance are always so ready to talk and give explanations to a stranger or recieve his explanations before shooting. Also, I was a bit confused at the end: was his real motive revenge or the money? I may sound too critical of the film but I actually liked it a lot. It gets a solid 4/5 from me.

Watched this yesterday, and I thought it was really good. You can see that it had been made with care and craft. It’s very twisty-turny as many Spags tend to be but, somewhat refreshingly, that doesn’t mean it’s difficult to follow; in fact it’s to the film’s credit that it spins quite a few plates without feeling convoluted at all. I wasn’t convinced at all by the choice to make the taciturn anti-hero gunman a bespectacled fellow - it looked strange - but as the film went on Richard Harrison really sold the role well and they even managed to fit in an amusing “bit” concerning the glasses, a barfight, and a rack of spares concealed in his coat.

Wasn’t expecting anything at all from One After Another; there are no real star-power names in the cast, the director isn’t one of the more compelling names one finds within the Spag genre and I don’t recall hearing the name of this film bandied around here… well, ever. It must just not have been too widely viewed I guess, because this thread is largely full of love. It’s a bit of an undiscovered gem. “A ruby in the dust” as they say. 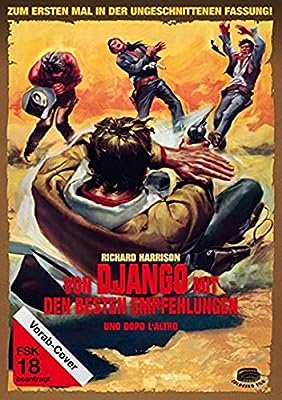 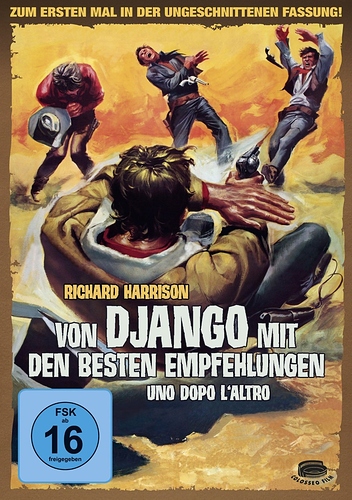 Watched this yesterday via the German DVD, very nice movie

Just stopping by this thread to say this; I love Harrison’s bespectacled look. ;D

I am suprised that there are so relatively few comments in this thread since this solid SW should deserve more attention IMO.

I get a slight “early Leone”-feeling from One After Another (emphasized by a little flute “whistling” in the later parts), so the excecution is good.
The plot is fairly complex but entertaining with its twists, but I seem to notice some earlier neglected detail or details during each new watching (around 5 now I guess). The music including the main theme is good enough.

I am no great fan of Richard Harrison though who tends to have just one grim expression of his eyes/face, but his character here is cool and maybe seems to have more brains (and spectacles). Otherwise there are several well known SW faces who do their parts well enough IMO.

Many scenes are shot in Tabernas desert, Almeria, Spain, but the town is the Cinecitta western town in Rome.

So I maintain my 7/10 rating, but there is much competition for the rank on my SW top list…

I am suprised that there are so relatively few comments in this thread since this solid SW should deserve more attention IMO.

Agreed. I’m a fan of this one. An Arrow release across Europe and North America would see One After Another storm up many peoples’ lists of favourite spags, I reckon.