Does anyone know how to get a copy of this film? I’ve looked around on the internet for many years but I’ve never had any luck. I found an image of a DVD cover. I’m not sure whether there’s an official release or perhaps a bootleg. If anyone knows how to get a copy with English dubbing or subtitles, please let me know! 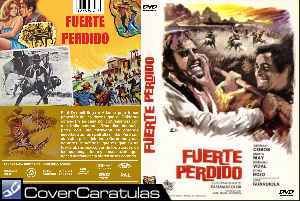 Still looking for this one if anyone can help!

You made me curious, so I watched Fuerte perdido today. I could find neither a DVD release nor an English-language edit of the film. What I found is a Spanish television version, running 88 minutes and 30 seconds. 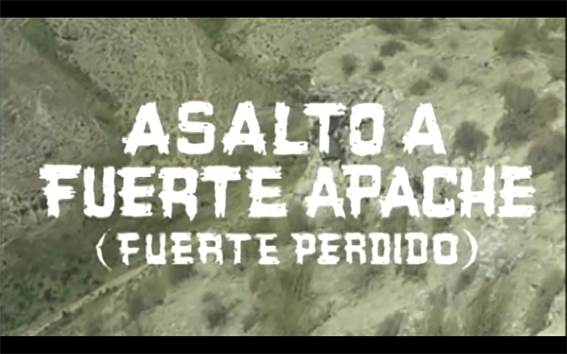 Fuerte perdido is basically a traditional (cavalry) Western. Like, for example, in John Ford’s Sergeant Rutledge (1960) or Sidney Salkow’s The Great Sioux Massacre (1965), the main narrative is framed by the trial or inquiry of one the protagonists and related through flashbacks. The film’s story is standard fare: Geronimo and his Apache braves are on the warpath. They lay siege to Fuerte perdido (the “lost fort”), which is held by a handful of soldiers and a wild assortment of civilians, among them the movie’s hero, Paul Driscoll (Germán Cobos), a gang of despicable gunrunners and whiskey peddlers (Aldo Sambrell et al.), a Sioux woman, Tabali (Ethel Rojo), and, later in the movie, Driscoll’s wife Mary (Marta May). Tension in- and outside the palisades gradually builds to a horrific climax.

Prolific Madrid-born director José María Elorrieta (1921–1974) delivers well-staged violent action and dramatic romance; composer Fernando García Morcillo (1916–2002) an eclectic, catchy score; and crooner extraordinaire José Guardiola (1930–2012) two heartrending songs, “Caravana” and “Camino del sur.” A third canción, “Volveré” (“I Will Come Back”), is interpreted by a female singer whose name the credits give as Maruchy Taylor (I guess – the version I watched is cropped on both sides, so her last name appears as “Taylo”). Among the cast are familiar faces such as Lisbon-born Cris Huerta or omnipresent Frank Braña.

In Any Gun Can Play, Kevin Grant mentions Fuerte perdido as part of a first wave of European Westerns, “a rash of westerns with cavalry heroes and Indian villains. […] That the likes of […] Massacre at Fort Grant […] trespass on such well-travelled territory indicates the timid thinking and lack of adventure behind this first wave of films. All repeat the stock situations […] and […] show little interest in Native Americans as people” (p. 41).

I haven’t seen this one, but did watch a couple of other Spanish injuns movies from the period, the fist wave of European Westerns, “a rash of westerns with cavalry heroes and Indian villains.", to use the words of my good friend Kevin Grant. So far I found these movies unimpressive, overall as intelligent as the Winnetou movies, but lacking their charm (and better production values)

I noticed that this movie was loaded up on a site I’m a member of, but franly, I wasn’t tempted to download it

I was pleasantly surprised by its production values. It doesn’t look cheap at all: many extras and horses, nice sets and costumes, proper lighting and photography. The story and the way it is told are too generic, unfortunately. Not to mention its characters. Fuerte perdido tries hard to compete with American Westerns of the same kind but, of course, fails. Well, it’s not so bad, after all.

If anyone could send me a DVD-R with English subtitles, I’d really appreciate it. Fury of the Apaches is one of my favourites, so I know I’m going to like this one.

I would if I could. My Spanish being what it is (two semesters of a language course at Vienna’s Latin America Institute more than ten years ago), English subtitles would be much appreciated. – The notorious Thomas Weisser claims that Fuerte perdido “was remade with less than desirable results in 1966 by the same director as Fury of the Apaches” (Spaghetti Westerns, p. 212). Oh boy!

Did you spot him in the movie? Overall not too bad as these go and I also thought it was reasonably well done.

Yes, despite all its shortcomings I liked it. The ending felt terribly rushed, though.

Did you spot him in the movie?

Isn’t he the guy in the wagon who offers his canteen to Tabali right after they have picked her up? – By the way, do you know who Maruchy Taylo® was (or is)?

Isn’t he the guy in the wagon who offers his canteen to Tabali right after they have picked her up?

You mean this guy? Yeah, I believe you’re right.

do you know who Maruchy Taylo® was (or is)?

No, but it looks like Taylor is correct. There are a couple of watermarked photos here and a couple of recordings with “Intérpretes: Maruchy Taylor y orquesta”.

You mean this guy?

Sounds like the voice in the film’s second song. I’m pretty sure that’s her. Cool!

Not that bad film but if you’ve seen one of these cavalry films with the fort defending plot you know what you gonna get, all of them I’ve seen have been very similar. This one differs a bit being darker and more pessimistic than most.