They’re some actors and actresses we love, others we hate and for the most part, a majority for whom we don’t feel much at all. We love them for their performances, their charisma, their beauty, their idiosyncrasies, their style and sometimes for reasons we don’t know. Before I started to consider Kurt Russell my favorite actor of all-time, I had seen three of his films several times. But it took me only one viewing of A Bullet for the General to become a fan of Aldo Sambrell and that despite his short role. For some reasons I didn’t like Philip Seymour Hoffman until I saw Before the Devil Knows You’re Dead and now I love performances of his I didn’t even like before! Point is, we (or at least I) don’t chose which stars we like… or how many films they made.

When I first saw The Big Gundown, I immediately took a liking to the actress who played Cuchillo’s feisty young wife : María Granada. She shared a scene alone with both of the film’s stars and managed to hold her own admirably, plus she was cute as hell. After watching the movie, I looked for her filmography on IMDb only to learn that she appeared in merely twelve films and one TV series episode. She was unfortunately active for a total of only seven years. She was in four euro-westerns, three Sergio Sollima directed features and often co-starred with spaghetti western’s regulars Fernando Rey, José Manuel Martín and Aldo Sambrell (!), amongst others. Most of her films aren’t readily available, but they aren’t too hard to find, if you know where to look (I even found where to get, on the Spanish side of the web, the obscure Cuatro bodas y pico which also stars Soledad Miranda). What’s lacking is information. 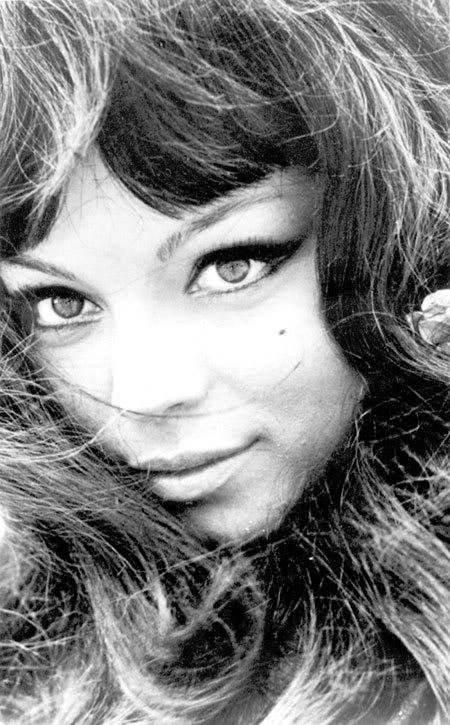 So I did a little internet detective work. The only substantial information I found was that her birth name is Manolita Lopez, thanks to Tom B.'s “Westerns… All’Italiana!” (the birth names are those in parentheses, right?). I also checked elsewhere than on IMDb for her filmography, but didn’t find much (I frankly doubt that she’s the same María Granada that did two adult films in the 80s). I also found two photographs of her on a website called “Orazio Centaro’s Art Image on the Web” (posted above), one of them was tagged as “Spanish Actress” and the other had the name “Manuela Barroso” in parentheses (the photographer’s name?). My biggest breakthrough was finding an Ex-Yugoslavian magazine/newspaper (!) on Ebay that featured her on the front page, curiosity got the better of me and I bought it. Figured I could surely find someone who speaks Serbian (that’s the primary language of the region, right?) to help me with the translation. Unfortunately, it seems like it doesn’t have an article about her! What kind of magazine has a front page of someone and no article about them (I checked the magazine over several times and I didn’t find her name anywhere in the 39 pages it has)! A major disappointment, but at least I have a nice picture of her now!

I wanted to take a photo myself, but I can’t find the cable for my camera. Here’s the seller’s picture instead.

If you know more about María Granada, please do share! Anyway, I know she’s not exactly a very recognizable figure (and that she only made one spaghetti), but she has a very special place in my heart and I wanted to share this.

Thanks for the reply, El Topo! I was pretty certain that there was another María Granada and that the websites which showed two adult films in her filmography had mistakenly concluded that it was the same actress, but it’s nice to have a confirmation. Also, the possible reason you give for why she stopped acting makes a lot of sense, I wouldn’t be surprised if that was it.

I don’t expect to learn a lot more about her, but it would still be nice to!

Maria Granada and Russ Tamblyn in “Son of a Gunfighter” (1965)

Thanks for the correction, Tom B.! As for the still, I had already seen this one, there’s also a couple more of them.

It seems she disappeared from films around 1968/69. Most likely she married and left the industry behind. Sad because we’ll probably never know what happened to her until her passing, much like Rosemary Dexter. I often wonder if these people oever use the internet and google their name to see what pops up and if people still remember them. I think a lot would be surprised that they are.

I often wonder if these people oever use the internet and google their name to see what pops up and if people still remember them. I think a lot would be surprised that they are.

María Granada has been on my mind recently. Mostly because I was finally able to get a copy of Cuatro bodas y pico, but also because I’ve discovered a trailer for Amando de Ossorio’s Escuela de enfermeras and that her French film La tête du client is actually available on VHS. So, for some reason, I took out my Serbian magazine with Miss Granada’s picture and proceeded to re-“Google translate” the short paragraph about her. I seem to remember already trying it once, when I first got the magazine, but from what I remembered the results were unreadable and surprisingly when I tried today it wasn’t, so maybe my memories of that day are a bit messed up. Here’s what it says :

Now that’s a bit perplexing, not just because of how unlikely it seems, but also because when this edition of “arena” was published, in 1967, John Ford had already made his final feature a year prior. So it would have had to be a project that didn’t come to life, but I can find no information on a film called The Ten Year Itch when searching on the web with either the English translation or the original Serbian name (I even find stuff on Wilder’s The Seven Year Itch in Serbian). Well, maybe there’s another American John Ford that made an obscure movie called The Ten Year Itch, but most likely it’s just complete bogus.

Maybe someone will find this as interesting as I find it to be. ;D

Hum, no idea. I can’t imagine either Manuela or Barroso being rare names, would depend on the context of the picture (where it was found), I guess. By the way, Escuela de enfermeras will soon be on CG!

Well, if you are still interested in know anything more about Maria Granada, I can ask her. She is one of my aunt’s closest friend. the funny thing is that i didn’t know she was an actress when she was young.

What I can tell you is that she didn’t quit from movies because she married, and that after she left acting she worked as fashion designer.

I just looked up her credits and it is interesting that she was in several pre-spaghetti westerns and then once the genre actually became popular she left the business!

[quote=“fronter, post:12, topic:2590”]Well, if you are still interested in know anything more about Maria Granada, I can ask her. She is one of my aunt’s closest friend. the funny thing is that i didn’t know she was an actress when she was young.

What I can tell you is that she didn’t quit from movies because she married, and that after she left acting she worked as fashion designer.

Thanks for the offer. It’s such a shame I was away from the board when you posted that, I would definitively love to ask her a few questions if she doesn’t mind!
Hopefully you’ll see this post.

Apparently Manuela is not her real first name but it is Manolita which does appear in several credit listings. Now that could be the name of a relative but again the mystery continues. So far no response fronter. Beginning to wonder about that.

Did you read this post by @Pamela? According to this website, Manuela Barroso was/is the widow of Juan Bienvenida.

Thanks Companero M.
I had not seen that post. I wish these people who know here would give us some specific biographical information on her.
Best,Tom