The most obvious example is James Mallory in Duck, You Sucker, but I was wondering if there were any other Spaghetti Westerns that feature Irish characters? The 1971 film Ned Kelly is one of my favorite non-Spaghetti Westerns and Irish from Red Dead Redemption is one of my favorite video game characters so I was curious about other examples in the genre.

I have watched Run Man Run and Mannaja where Donald O’Brian appeared, but he also performed in Four of the Apocalypse, Keoma and Silver Saddle. But that was an Irish actor !

The villain in Return of Sabata.

was wondering if there were any other Spaghetti Westerns that feature Irish characters?

The priest played by Robert Shaw in * A Town Called Bastard is an Irishman. At least it is an Eurowestern.

Sorry I don’t know of any answers to your question but I’m really glad someone loves Irish as much as I do. I’ve 100 percented Redemption 1 and UN I think Seven times, and he still makes me laugh out loud on several occasions.

Haven’t heard of this one, I’ll have to check it out. Thanks for the recommendation.

The villain in Return of Sabata.

Thanks, still need to watch this one. The first two were a lot of fun.

Never knew he was Irish, interesting. I guess the dubs I watched never gave him an accent.

priest played by Robert Shaw in * A Town Called Bastard

Thanks, just watched this one recently actually. Can’t believe I forgot he was Irish, I remember thinking it was an odd choice for the character (though a lot of things about that movie were odd).

really glad someone loves Irish as much as I do

He’s incredible, reminds me a lot of Tuco from The Good, The Bad, and the Ugly. I was really hoping there’d be a Spaghetti Western featuring a scummy Irish outlaw like him, but unfortunately it doesn’t seem like there is.

Brett McBain and his family ‘Once upon a time in the west’ … how could you all forget that!? LOL

I wonder how that surname was chosen?

In case anyone is wondering, apparently the film Man of the East has an Irish prostitute in it as well.

HAH, “Oh me virgin ears!” Wish I had gotten the chance to play online mode in RDR1 just to play as Irish.

Shoot, can’t believe I didn’t remember him. Though, in my defense, he does die within the first fifteen minutes of the film.

Do you mean Mallory? According to Google it’s, “a name for a person who was known for bad luck and an unhappy disposition.”

I meant McBain but thanks for the information. Nice piece of trivia.

Brett McBain and his family ‘Once upon a time in the west’ … how could you all forget that!? LOL

I feel like such an idiot because I never thought of them.

Just remembered, I think the old man, “Dirty,” played by Antonio Palombi in My Name is Nobody is also supposed to be Irish. He has a really small role, but I thought it worth mentioning.

Yeah, makes me wonder if it was intentional or not.

Heard El Puro mentioned a few times, another one I’ll have to watch.

I’ve heard that “Brett McBain” came from the names of American mystery writers Brett Halliday of Mike Shayne fame and Ed McBain who wrote the 87th Precinct novels. that may have been mentioned somewhere in Prof. Frayling’s massive book about OUATITW.

I assume Bud’s character O’Bannion in TODAY IT’S ME, TOMORROW YOU is supposed to be Irish or Irish-American.

is supposed to be Irish or Irish-American

Heh, with a last name like McBain it’s probably a good guess, thanks for the rec.

What about Stephen Boyd as Captain Chadwell Williams in Those Dirty Dogs (1973), does it count? 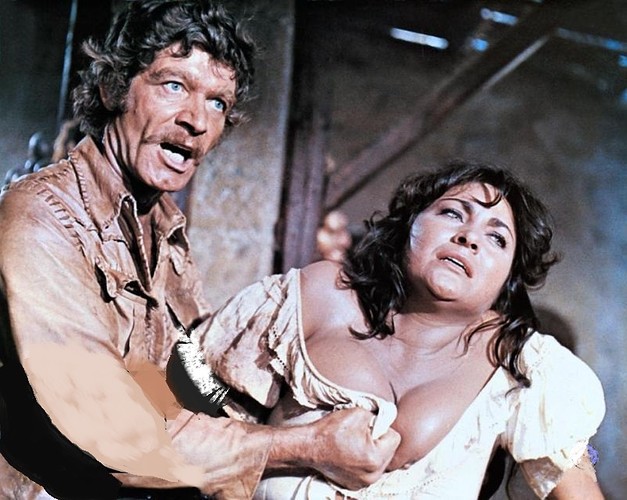 Not really … but nice choice of photo!