The basic premise for this is that Steve (Stephen Forsyth) wants to settle down with Susan (Anna Maria Polini), but her dad Duke (Conrado San Martin) aint having any of that… 'cos Steve and Duke have been pistoleros - and that’ll mean trouble’ll follow 'em. To complicate it, there’s a money-grabbing squeeze of Duke’s who really fancies a go on Steve. When he don’t oblige, she weasles her way into Jackson (Franco Russel) 's favours and sets ‘em all up. Jackson and Burns run the town and are wanting to buy up all the farms. Steve has other ideas. There’s a great touch with Burns having a wooden (or knackered anyway) right hand which makes him a bit pissed. And talking off pissed - we’ve got a whisky-pickled ol’ scrote to add a bit more colour.
It all sounds pretty good, and I know Brother Tig really enjoyed this, but it failed to fully win me over. It’s biggest let down for me was the overlong slices of dialogue and the extremely one-dimensional black and white characters.
Here, I’ll cut and paste my previous (late night) ramblings …

"I wanna feel, between my fingers, the warm wood of a plough
The prickly ears of grain
The silky soft hair of my woman
But I can’t…
'Cos I gotta kill.

I wanna look into people’s eyes
and see 'em smile at me
To clasp the hand of everyman
and feel mine clasped by his
But I can’t…
'Cos i gotta kill.

The southern hills are waiting for me
The branches of the trees are weeping
I don’t have time to die
In all these things there’s the truth of life
And when I speak of them my voice fails me."

The opening song - well a talkover really, is played over wonderfully sketchy painterly graphics …
and that’s probably about as good as it gets - O.K. - maybe it’s not that bad, but it doesn’t have much of a spaghetti-feel to much of this early-ish entry.
Steve Blane and his future pa-in-law (but not if I can help it) Duke Buchanan, fall out over the former wanting to settle down with the latter’s daughter. Duke’s philosophising goes around the premise that somebody’ll always be after a pistolero like Steve, and he points out that his own wife got caught up in some fracas or other and got herself an accidental bullet. Neither are gonna budge on this - and it’s one of those ‘a man’s gotta do…’ films that has clear-cut characters in the American tradition of black and white.
It’s a simple plot - a bit too obvious - and over-explained by too much snappy, sharp, quippy dialogue - deep and meaningless for the most part of it. The naievety of the premise demands that we go along with it but it’s pushing our credibility a bit … except just now and again we see a glimmer of spaghetti-ism amongst the simplistic premise. (Well this is 1965 - early days still.)
Some of the (far too much) dialogue is good - Duke explains to Steve that the two of them will always be pistoleros, and if he doesn’t forget the daughter then "It’ll be me that has to hunt ya down and put an ounce and a half of lead between your eyes."
And there is a bit of that ‘bullet in the forehead’ stuff, in the very good action sequences. Blimey - Steve can shoot backwards, behind himself better than Django, and that sort of stuff’ll keep this fan happy for a while.
If all this sounds mostly negative - it is because it is a very Americany-moralistically sort of early spaghetti (Phil would be better at explaining this than me). There’s too much talking and explaining, where a bit of spaghetti silence and a wry grin or a snarl or a grimmace would suffice and improve. However the final shootout is great and the stuntmen certainly earnt their dollars on this and made it worth the price of admission.
The best actor in this was not one of the humans however. Franco Ressel made a good villain - true, but the main man (Stephen Forsyte) made Anthony Steffen (I like him! ) look positively animated by comparison. Steve’s white horse responded to a whistle, played dead, acted lame, and even (in one bit of discontinuity) turned black!
In conclusion this was reasonably entertaining but mostly in the action sequences - but overall it was a bit lame - just like the horse.

The version I watched wasn’t the Japanese SPO widescreen dvd - but a fullscreen VPD video - 79 minutes.

I saw this one at least twenty years ago, remember it only vaguely

Reading your synopsis I have the idea that there is a lot of American influence at work (romance, family drama) as well as some existential talk about being damned as a pistolero - I like that (yes, the romance too).

I remember the final shootout, that was quite spectacular, and the ‘shooting behind the back’ trick, also performed by Ghidra in Pistoleros
What is really odd, is that the title of the VHS (I think it was a French or Belgian one) was … Pistoleros

It all sounds pretty good, and I know Brother Tig really enjoyed this[/quote]

…it is a very Americany-moralistically sort of early spaghetti

Reading your synopsis I have the idea that there is a lot of American influence at work (romance, family drama) as well as some existential talk about being damned as a pistolero - I like that (yes, the romance too).

Me too. Quite an American influence but hey…there’s lots of good American westerns out there. I enjoyed this film a great deal…thought it was damn good with lots of action and, as said, a spectacular final shootout. I would recommend it without hesitation as worth a watch for SW fans and non-fans alike. Great entertainment.

Just popped a review of this up on the database.

[quote=“scherpschutter, post:6, topic:1074”]Funny how we keep watching the same movies at the same time
I had this one planned for tonight or tomorrow night …[/quote]

Ha ha. Yes, we’ve done that before haven’t we.
Well I look forward to hearing what you think of it.

Nice review Phil. As I said in an earlier post I thoroughly enjoyed this one.

Like Phil says, it’s quite a derivative movie. It starts with two pistoleros paying homage to the seven by defending a town against a gang of Mexican bandits, led by Aldo Sanbrel. Then the two fall out (the younger one wants to marry the daughter of his friend against the older man’s wishes), the younger ones still marries the girl and wants to settle down in a valley where small farmers aren’t welcome (shades of Shane). Despite being threatened and shot at, he buries his gun and promises never to use it again, but he’s forced to dig it up when his father rides into town.

Melodramatic, often clichéd spaghetti western with strong Hollywood influences.
Very verbose, very clean (Forsythe wears a virginal white shirt throughout the movie), but the action scenes are well-staged (but Stanton won’t like them, since nearly all victims fall from great heights, aaaaarghhh)

A bit corny, but somehow I enjoyed it very much.

Oops, and I thought I had already written my thoughts about this film in this thread. Maybe elsewhere.

It starts and ends rather violent like a real SW of the type 66 or 67, but in between it is more like a pre Fistful western. Cheesy, like our forum mates like to call it.

The rooftop falls are better than usual in this one because they hit the ground rather hard. Ho ho!

The rooftop falls are better than usual in this one because they hit the ground rather hard. Ho ho!

You’re right about that, there’s one fall that resembles the ‘fall flat on his back’ from Once upon …

Watched this one last night. Great campy opening credits, very nice atmospheric score and lots of stylish camera work, which may not be genuine, rather imitation, but is still fun to look at. OK movie, to its credit is also that it doesn’t overstays its welcome, little over under hour and a half is just the right length for it.

What’s with the money they use in the movie? It’s yellow A4 sized paper??

A fond favourite of Alex Cox, Gianni Grimaldi’s In a Colt’s Shadow (1965) is very much a film in the American style, being influnced by Wagon Train, The Searchers and most prominently, The Gunfighter. Bolstered by Nico Fidenco’s beautiful score, the film also has fantastic opening titles combined with an excellent, almost Johnny Cash-esque “talking song”. The main movie plays it straight, with a genuine hero, played by the stolid Stephen Forsyth, not a cynical, greed-filled murderer but it still has a Spaghetti feel to it, thanks in part to Grimaldi’s excellently staged action scenes, in particular the final, climactic shootout. The cinematography is good, utalising the Almerian plains wells, and only the interiors are overlit, lending them a generic studio feel to them. I enjoyed it, and with the inclusion of banking villains as opposed to Mexican bandits, actually looked forward to the future of Spagehtti Westerns.

First viewing on this one. After really liking Starblack, decided to check out other films by Grimaldi and saw this in the DB. Like in Starblack, the action sequences are handled nicely and the end is one of the best big shoot-outs I’ve seen. I may have missed some titles, but it looked like the only other spaghettis directed by Grimaldi are low-tier comedies and if so, a shame there are not more serious entries.

Nice soundtrack and the credit sequences are cool. A bit of a slow burner but the ending makes up for any slowness. Although a great ending, the final scene is a bit weak for me

Custom cover, with extensively retouched original poster - still could be a lot better, but did this one a while back and there isn’t much out there for this poster except really small, poor images: 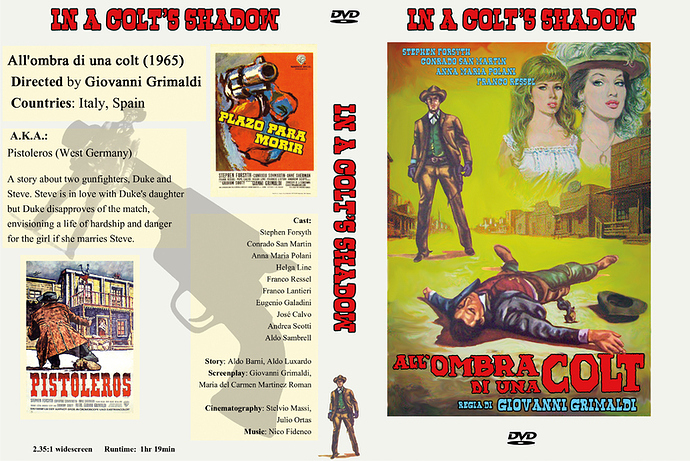 Just watched the new Koch BluRay of this. Interesting flick. The amount of stunts in the final showdown is out of control

It is. Good beginning and okay, that over-the-top ending isn’t bad. Otherwise not a great movie, slightly above average, but not great. Also looks a bit ‘clean’

Interestingly, the German one is without lyrics, and for Italian it’s in Italian and the US version has the lyrics in English of course… made to sound very American, t he whole thing. Highly unusual style for a spaghetti, too

Interestingly, the German one is without lyrics,

Fanatastic, for one time the Germans got something right when releasing a Spag.

This one was also maybe uncut, while normally the German release companys must have had an unwritten rule that it is not a real Spag if at least a few seconds were cut out, better several minutes.