No thread for this one it seems so thought I’d start one.

This was actually better than I expected though certainly not that much of a winner in general terms. The drawn out bar fights being dullsville in the extreme . But for some reason I was expecting something of a comedy and it isn’t that so something of a bonus.

In checking the database I see Lincoln Tate’s character listed as Lobo. But in the English language version I watched he played a character called Steve. Lobo was the rotund Mexican bandit. Assume the DB is in error but on checking Giusti’s book he has the same details. My suspicions lead me to Weisser (who Giusti quotes) and sure enough he has Tate playing Lobo along with with an erroneous and muddled synopsis.

Before I change the DB I thought I’d run it by here to make sure there isn’t another audio version out there with different character names. Anyone?

This one recycles some of the score tracks from John The Bastard. Just when you thought the double crosses in the plot have ended, another one pops up. Peter Martel lives up to his characters name in this one…cheerful. Best character for me is the grave digger who digs graves by using dynamite.

Watched this for the fourth time or so. Ok sunday entertainment for me. It starts out lame enough and you might expect a Trinity type coemdy western, but that´s not the case. I don´t know who directed what, but the typical Fidani death rolls are present, which of course is a big plus. Martell does quite alright in this tragi comical role. In the end it´s nothing to write home about, but I sort of like it. 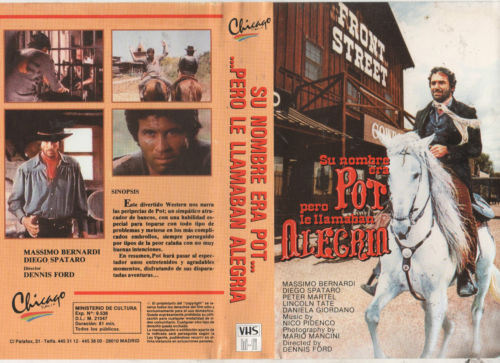 Is it Robert Hossein on the front cover?

Yeah. I did say it was ridiculous.

Awesome, would love to see a rip of this which could be sync’d up to existing English version of not very good quality

The fights in the puddle and saloon go on for a while, but at least done in a realistic way… I kept hearing a woman screaming in the saloon but never saw her… overall I liked it, John the Bastard themes worked pretty well for it.