Link to the database : http://www.spaghetti-western.net/index.php/Alleluja_e_Sartana_figli_di…_Dio

For some obscure reason, Alleluja & Sartana Are Sons… Sons of God has inspired me to write my first lengthy review of a film on the forum. Now, I’ve checked if there was already a thread for the movie and I couldn’t find one, so hopefully it won’t be like the last time I created a thread for a Siciliano. Anyway, here it is :

Occasionally in the land of spaghetti westerns ventures an actor whose contribution to the genre will be limited to a single film, sometimes the actor graces us with a performance rankings as one of the very best, other times the actor’s presence is only recalled as an oddity. Amongst the examples of this phenomenon, although not really falling in either categories, are Ron Ely, known for having played Tarzan in the eponymous 1966-1968 TV series, as well as for German actresses Uschi Glas, but contrary to many others, their common spaghetti western incursion is barely remembered… and there’s a reason for that. Mario Siciliano’s Alleluja & Sartana Are Sons… Sons of God is that one spaghetti western which features Ron Ely and Uschi Glas - although both of them have acted in one European western before (and both also have Winnetou connections, one indirectly, one directly) – and unfortunately for them, it’s a far cry from Siciliano’s first western. The production happens to be a twin movie to Trinity and Sartana… Those Dirty S.O.B.s, both share most of the same cast, crew and overall questionable quality.

The first thing that differentiates Sons of God from its twin movie is of course Sartana’s new partner. Adios Trinity, here comes Alleluja. Trading off Harry Baird for Ron Ely isn’t too bad of a deal, not to say that Baird was particularly egregious, he did okay with a terrible role in a terrible film, but Ely brings some more charisma to the table for this next round. He’s also less jarring as Dell’Acqua’s partner than Baird who had absolutely no chemistry with the aforementioned other star. That said, I really wish that Alberto Dell’Acqua had been the one to be traded off for Ron Ely instead, the pretty boy stuntman is an awful comedic lead. Other trade-off includes Daniela Giordano as Trinity’s love interest for Uschi Glas as Alleluja 's love interest, I personally prefer Giordano, but the new lady is quite beautiful too and she appears far more often than her S.O.B.s counterpart, which is not a bad thing at all. Carlo Savina is also replaced. The seemingly less experienced (as far as movie composing goes, anyway) Elvio Monti and Franco Zauli are the ones to take over the musical responsibility. Not a big loss considering that Savina’s score for the other twin was far from being one of his finest hour, Monti and Zauli don’t fare much worst. Probably a lot of recycled sets, but I have to admit I failed to notice these. One thing is sure though, the “second” Sons of looks even cheaper than the first, in parts because a lot of the film takes place around a barely existing church. Other than that, most of the cast and crew deliver similar results.

Mario Siciliano’s direction and Gino Santini’s cinematography are once again difficult to judge fairly because of the crummy print available, but I did notice a few good looking shots that momentarily put me out of my boredom induced torpor. Most noteworthy would be the scenes, or at least parts of those scenes, in which The Wolf and his ghost-costumed henchmen attack the fog-filled town of Moonsville by night. The Wolf is of course played by Ezio Marano who previously filled the role of El Tigre and more importantly in the grand scheme of things (or of the spaghetti western world) played a character called Weasel in They Call Me Trinity - probably not a coincidence. He’s actually the funniest thing about Sons of God (even more so than he was for S.O.B.s, but then there was a few half-funny moments involving others than him in that one), his madman antics of howling like a wolf, hurting himself and his henchmen and other eccentricities can be hit or miss, but they do hit sometimes, unlike any other attempt at humor in this movie. That’s right, as a western comedy this one is a total failure, unless you happen to think that the film’s never-ending brawls, “humorous” ugly lady jokes, comedic gunfights and pieing are laugh-worthy or even entertaining, because that makes for most of the “comedy” in this film. Supposedly, other dubs are much funnier than the English one, but somehow I doubt that even with more dialog centered humor this film would really elevate the film. You’ll excuse me for almost forgetting to talk about the plot, but really, its just another story of two partners scheming to get The Money while some villain do and plans villainous things. The impersonation of a priest, the hanging of Sartana, ghostly henchmen attacking a town, the construction of a church, a marriage, the American War of Independence, the usual (trust me, it’s not as fun as it sounds). When confronting each work of Sciliano’s Sartana “diptych” no clear winner emerge, although Sons of God, thanks to its casting, is probably the biggest SW anomaly of the two.

Wolf character was really hilarious and was the only thing that made me laugh in this otherwise boring comedy western.

(…) Ely brings some more charisma to the table for this next round. He’s also less jarring as Dell’Acqua’s partner than Baird who had absolutely no chemistry with the aforementioned other star.

According to Dell’Acqua in real life between him and Ron Ely existed a fierce rivalry, and they were always on the point of having a punch-up! ;D
(source: Marco Giusti’s Dizionario del Western all’Italiana)

Do not remember anything about this one, and maybe that’s a good thing in this instance

@JonathanCorbett :
Aha, I wouldn’t have guessed that! I wonder if one of the two was hard to work with or if they just happened to hate each other. Thanks for the info! Also, are those two screenshots from one of the German DVD? They sure look a lot better than my copy did.

@ENNIOO :
Not even The Wolf? I think I’ll remember him for a long time!

are those two screenshots from one of the German DVD? They sure look a lot better than my copy did.

No, the screenshots are from an Italian TV recording.

Ok, at any rate it looks very good.

Thats a pretty bad film. Very unfunny. But I must say, I have only the German DVD which is heavily cut !

Not even The Wolf?

It´s not that awful. I liked it better than the first time anyway.
Somewhat of a master piece compared to Trinity & Sartana, although that doesn’t say much.
I viewed the Video49 version, letterboxed and uncut me thinks.
Rating: 5,5/10 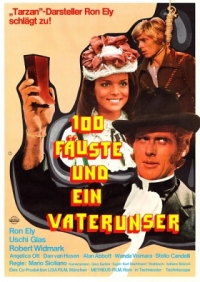 [quote=“Bad Lieutenant, post:10, topic:2820”]It´s not that awful. I liked it better than the first time anyway.
Somewhat of a master piece compared to Trinity & Sartana, although that doesn’t say much.
I viewed the Video49 version, letterboxed and uncut me thinks.
Rating: 5,5/10

Now available in English too:

Just viewed this one again for my sins. Its a tough one to sit through for me. I did laugh at how hard the film was trying to be funny in some way, but even that wore thin after a while. Not one I can see me viewing again in a hurry.

Ditto Ennioo’s thoughts for mine on this one.
It did manage to get me off to sleep during a bit of insomnia early this morning so I do feel some warmth towards it but in truth it is a tedious infantile slapstick affair with little if any merits that I can see. Not one I’ll be rushing back to.