Haven’t seen it yet but I would like to. What’s your thougts about this film?

Interesting to see Wayde Preston in a lead role.

Episodic film which is no wonder since it’s made between 66-69 with two directors. I didn’t even try to follow the plot but just enjoyed it as a mindless spaghetti fun. There’s lots of diguises and concealed weapons, laughable twists in the plot, hero has both mute and midget sidekick and so on.

Plot is not so good. Like Bill says just enjoy the weapons and the like. Some of the characters Preston changed into made me laugh, like the doctor who was painting red spots on an indians face to make it look like he was ill. In some shots Preston looked a little like Richard Harrison in his first disguise. Not one I will watch again in a hurry.

I agree with Bill san Antonio. Entertaining movie with some weaknesses.
The main character, who takes on various roles to kill his opponents.
As a doctor, wounded soldier, old man … Here are some funny moments, especially the silent coffin maker and his midget friend. Overall, the mood of the film is more serious.
The film reminds me a few in A Man Called Apocalypse Joe. The main character disguised himself too often.

The German DVD of KSM has good image quality. Unfortunately, in Fulscreen (the data of the database - 1.78:1 anamorphic widescreen- are unfortunately wrong).
Unfortunately, much cut (about 10 or 12 minutes). And only German audio.

[quote=“The Stranger, post:5, topic:1922”]The main character, who takes on various roles to kill his opponents.
As a doctor, wounded soldier, old man … Here are some funny moments, especially the silent coffin maker and his midget friend.

Ahhh! I saw some lobby cards on ebay - (they’re not there now I think) - some time ago for an unnamed sw that had a man with a wounded head and a crutch, and a midget in a coffin. This is the film I presume - I always wondered what it was.
I think I saved the images on another computer but I’m not sure, intending to ask if anybody knew the film. Now I think I know!

Shame about the German audio only tho’ - I’d like to see this.

I did save it. I thought the fellah with the beard might have been Harry Dean Stanton at one point, but couldn’t find a film that fit these images. I even goggled “midget in a coffin” to no avail.
Please tell me this is it Stranger/BsA …!?

Yes, Rev. This is the movie.
The midget is later beaten up. Therefore, he has in the last photo a black eye.
The coffin-maker and this little guy are a funny duo.
Unfortunately, only one survived. I do not want say, to rob not the tension.

Just watched this movie last night. Entertaining but the prolongued production with stops and goes didn’t help the plot continuity.

Watched this one last night. I took several naps in between. Despite one or two good ideas (e.g. the camouflage-scence) and sidekicks below average IMO.

Why in the Database there’s a question mark on the runtime? 94 minutes is correct.

Why in the Database there’s a question mark on the runtime? 94 minutes is correct.

Nobody knows, change it …

Where the dickens does one find an English friendly version of this movie??

I completely doubt there is one availble. Maybe try all the alternate titles and see if it there hasn’t been on a vhs release?

Where the dickens does one find an English friendly version of this movie??

Eng friendly version? Well, try here, you might get lucky

Ok, I was interested in this spagh for Gariazzo was involved and you would clearly say that by frequently used disguise of the hero. Gariazzo used this idea with a more success in Drummer Of Vengeance.
I love Drummer and I like Acquasanta Joe, but this was almost completely dreadful. I just gave up on the plot somewhere in the middle and just laughed how demented it is.
To say that, there are some good bits in it though, some interesting scenes here and there, but the result as a whole is just horrible.
1,5 out of 5.

Eng friendly version? Well, try here, you might get lucky:

Glad I’m not the only one who thought Wayde Preston looked like Richard Harrison in this one.

The English dub I watched had bar none the worst sound quality I’ve heard in my life so far. I can’t really say anything which hasn’t been said above. Strange film which tries its hand at being funny in the second half. 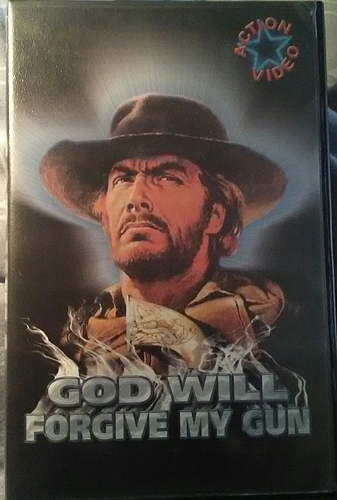 My VHS has the English dub. It’s hissy but the dialogue is clear with the volume turned up.

You must scourer the web looking for these tapes. I can never find them.

I’ll have to see if I can get my DVD recorder working and transfer what I have.