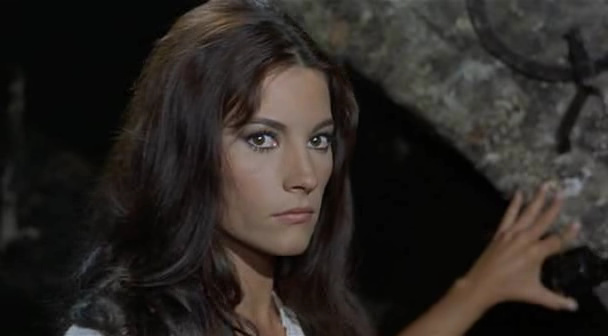 Yesterday I watched the exciting, and a little sad at the end, Giarrettiera Colt (Garter Colt) with the beautiful Nicoletta Machiavelli as the title heroine. To my knowledge (and feel free to let me know in the reply comments if I’m mistaken here) Garter Colt is really the only true Female Anti-Heroine of the SW genre. The genre has certainly seen its fair share of strong women from saloon keepers to shop owners and even the right hand to the main villain, but I doubt we’ve ever seen a woman come close to the personage that is Garter. 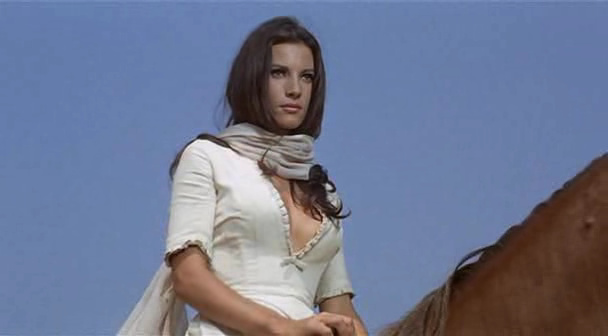 What makes the character so interesting and unique, at least from my perspective, is that she’s completely independent and resilient. Most women of the genre at this time were strictly eye candy for the male demographic (which in Garter’s case isn’t a bad thing), a punching bag the bad guys, or just some extras in the background. Garter Colt is an exception because she gets solid characterization, a background story, and a great screen presence. This is a woman who’s not going to let a man dictate how she lives, does was she wants, and loves it. 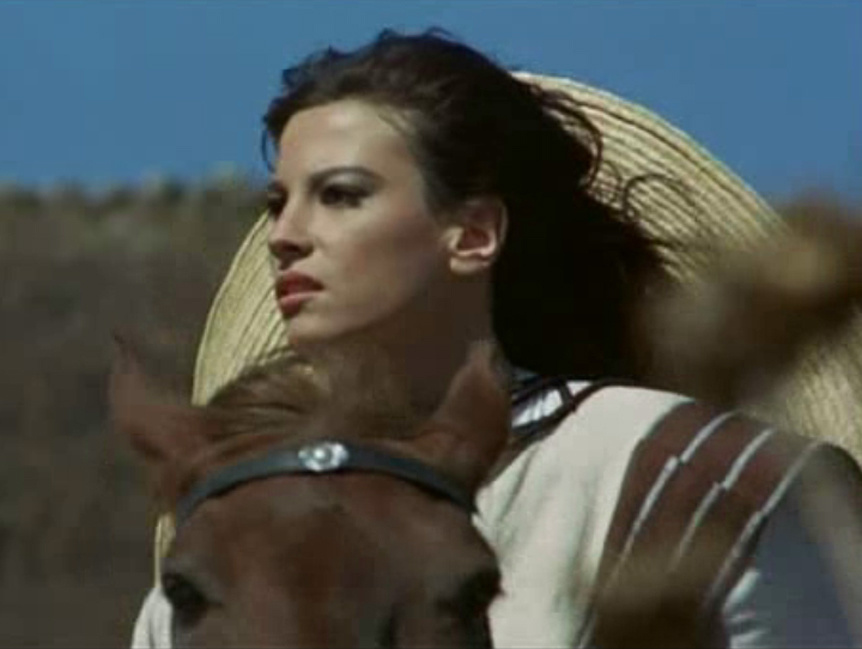 Signora Machiavelli (a descendent of the famous Niccolo Machiavelli) was the perfect choice for the part as her soul piercing eyes, her face, and her acting skills allow her expertly embody this fierce independent woman who’s botth good with cards and a gun, and certainly doesn’t hesitate to use the latter if necessary. When she upsets the plans of the crazy Rosso (Red) (played to the hilt of hamminess by Claudio Camaso), she sets out to protect the innocent and her boyfriend as he aids the Mexican Resistance against the forces of Maximillian. In this way she has the qualities if the Anti-Hero in that she’s generally out for herself, but when push comes to shove, she’ll always do the right thing. 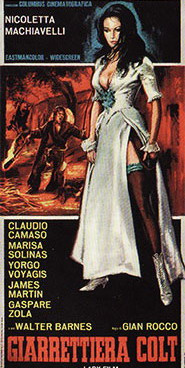 My only gripe is that by film’s end she kind of loses her spirit in the wake of her lover Carlos’ death, and just seems to go off for nowhere. I would’ve really loved to have seen Machiavelli continue to play the character in a series of adventures, like with Gianni Garko and the Sartana character. The screenwriters could’ve easily gone with she continues to help the oppressed as a means to preserve Carlos’ memory, going from place to place, giving aid and hope to those who can’t do it alone. I just think it’s a damn shame we didn’t get more characters like this as they were refreshing and something new the genre could’ve utilized more of.

It seems to be a rather interesting SW (judging by an Italian Youtube video) , but I would like to watch a potentially official DVD/Bluray release with English audio.

Damn, I’d love to have this on a blu-ray with subtitles!

I’ve only seen this film without subtitles. It is awful. But I feel that she was wasted in most of her roles but had potential and was crying out for a good director and superior scripts for her to really flourish. Perhaps this is why she dropped out of films and became rather sharp-tongued in later life.