So it was shown on a French Pay TV channel named Action TV December 2017, and that’s the source of the version mentioned earlier in this thread? Seems it was shown in Italian and French, though.

I guess so. And then someone added the English audio track. I (re-)watched both versions mentioned in my post above, no significant differences between Tele 5 and Action HD. The English audio tracks of those two versions are, of course, identical. According to a post on the French Western Movies forum, Ringo cherche une place pour mourir was (first) shown on Action TV in July 2015.

(re-)watched both versions mentioned in my post above, no significant differences between Tele 5 and Action HD.

Is this the Tele 5 version you watched?

I never watch movies on YouTube, but yes, since its running time is 88 minutes, 2 seconds and it has the Tele 5 logo and English audio, it must be the same version.

no significant differences between Tele 5 and Action HD.

How about a long scene of Juanita making love to her pimp, filmed through a green bottle lying on her nighttable? It’s one of several scenes cut in the Tele 5 version.

Also the Tele 5 is cropped, at least the one on YouTube is, see also the comparison of Tele 5 and the US DVD on Movie-Censorship.com - News about movie censorship and comparisons of alternate versions (Movies, Comics, Series, Games and more)

The Action HD has a speed up of I think more or less 2,5 sec a minute. If that is true, and it had run at the same speed as the Tele 5 and the VCI DVD, it would run for exactly 89 minutes. The most complete version at the moment, I think, but perhaps not complete.

I dont know the Action HD version but heres a direct link to a report about cuts in Tele 5 compared to US DVD:

The German version has three cuts (censorship):
Fistfight of Joe in the beginning.
Love Scene of Juanita.
Priest torturing one of Pacos men.

The cuts already have been in German cinema version.

How about a long scene of Juanita making love to her pimp, filmed through a green bottle lying on her nighttable?

But I don’t think ["Era un cow-boy”] is in the film. Perhaps it was included in the soundtrack release (it is listed here as Un Cow-Boy Di Nome Joe ), but (luckily) left out in the film.

That second song remains a mystery. Maybe it was used only on the Italian audio track, but if so, the
Italian opening credits would probably mention it.

Lovely song … they really had music with melody in the 60s - what happened!?

In the Action HD this scene runs for 45 seconds, in the Tele 5 13 seconds only . That is from the moment Juanita sheds her skirt and till we go to the gun holster. I wold consider that significant!

Eighty-two today: Pascale Petit, born in Paris on February 27, 1938, started her film career playing a small part in Raymond Rouleau’s remarkable Les Sorcières de Salem (1957). Based on Arthur Miller’s drama The Crucible (1953), the film’s screenplay was written by none other than Jean-Paul Sartre. The following year, Petit became a star with her portrayal of a wayward young woman in Parisian existentialist circles alongside Pierre Brice and Jean-Paul Belmondo in Marcel Carné’s Les Tricheurs. From 1957 to 1975, she had major roles in more than 30 motion pictures, among them two Westerns: Carnimeo’s Joe … cercati un posto per morire! and Guido Zurli’s Yumurcak Küçük Kovboy (literally translated “Brat, the Little Cowboy,” 1973).

After watching a fine Youtube video with this SW I conclude that it is not bad and looks good, but not enough entertaining or engaging for me as a story with boring male leading character but two good looking female actors, even if it is well played, directed etc. Nothing I now would like to buy and collect on an official DVD/Bluray. 5/10. 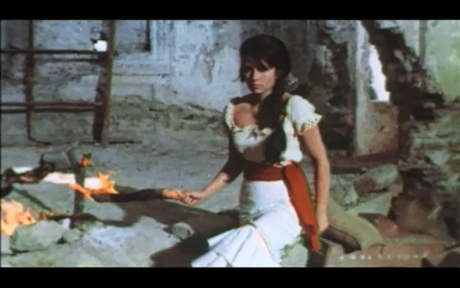 This film does have one or two oddities, yes. The setting makes it look like someone stuck a scuzzy cantina in some of those scenic ruins on Italian hilltops that got 18th-century Romantic painters like Hubert Robert so steamed up. Which is weird. I felt like I was watching a film about a bunch of actors performing an SW script for fun during an upmarket holiday.

One thing I wondered: this film seems to catch accusations of being too American. I know this is 1968 and “American Western” at the time meant both John Wayne and Hang ‘em High, but I still wonder whether most American movies would have been quite so laid back about the characters who make up FAPTOD’s second-string couple. Juanita is a sex worker (also sings a mean song) and Paco her pimp, but they obviously have a perfectly functional relationship - in every way – and when they finally wave Joe and Lisa off into the beautiful Lazio countryside, it’s as one of two symmetrical happy couples (though God knows what they’ll find to do up there on their own with the crooks gone, but I guess they can restart the bar/brothel, and they keep each other good and busy). Even if the cute ending is a gesture to American sensibilities, the film’s complete unselfconsciousness about this duo feels a good way from American puritanism (and I live in the States!). I could so easily imagine moralizing alternative depictions which would paint them as simply sleazy, or locked into some pattern where the woman has a sad/ pathetic/ masochistic/ codependent fixation on the brutal male forcing her into prostitution. Perhaps FAPTOD (!) has a pasta centre after all.

Are Fernando and Bobo supposed to be another gay couple?

Fun to watch, with an OK score, and I yield to no-one in my enthusiasm for Daniela Giordano. Pascale Petit’s easy on the eye too. But I can’t see it getting into my top 30.

I have watched it twice on Youtube, last time today. My main complaint is that it is too slowly progressing for example during the ride to the mine, and the story not interesting enough. But there is some glorifying Morricone-like music as a contrasting effect that is better than the story.
I find it too boring to buy my own DVD. The main male actor (and character) also seem “unattractive” but probably suitable for a supposedly former American army member. The two girls though look very good but with not so interesting parts.
It is funny that you get a djungle feeling once during the ride to the mine, but maybe there is a djungle near the American/Mexico border ? But that is not a real complaint on my behalf. Overall not so entertaining IMO 5/10.

Are Fernando and Bobo supposed to be another gay couple?

Considering the sexual aggression against Lisa (partially cut in the version broadcast on Italian TV), I’d say no.