Just re viewed this one via a HD T.V print. Moody film, with lots of back stabbing characters out for their own desires. Some brief female nudity aswell, make for a gritty watchable western !

I don’t remember this at all. And I think I would have, considering how middle of the road the rest of the movie is. Maybe my VCI copy is cut? Well, maybe nudity is the wrong word, it’s only a flash of her left (or right) breast

Rewatched this tonight. Like it a lot, even if the American style ending lets the rest of the film down. Some confusion as to the story on the SWDb film’s page. Fine review by Scherpschutter including this clip:

I’ve watched yesterday. It felt like a slowpaced low budget American copy. The version watched was on YouTube, bad quality. Not sure I’ll come back to it even with a good copy in hands.

Is this the one with Jeffrey Hunter? I liked this a bit…Hunter was a pretty decent actor who died too young.

Yes, and two beauties and that song

Details here on the difference between the prints:

Watched the German TV version (with English audio) tonight for the first time. It runs at the same speed as the VCI Video DVD, which is NTSC, The VCI DVD is 87:47 min. Additional scenes in the TV version add up to 1:46 min., the longer ending included. Total runtime 89:33 min. How about the Italian release?

Rarelust’s HDTVrip is similar in quality but only 85:18 NTSC unfortunately.

Yes, and two beauties and that song

Absolutely,… i like this little Spaghie, it’s one that i turn to from time to time.

Rarelust’s HDTVrip is similar in quality but only 85:18 NTSC unfortunately.

Watched this one tonight, and it seems uncut. At least it seems it has more or less all the scenes left out in the two other versions I’ve seen. The Rarelust must be PAL. And superior quality.

A strange thing: On the film’s page it is mentioned that the songs "Find a Place to Die"and “Era un cow-boy” are sung by Jula de Palma.

But I don’t think the latter song is in the film. Perhaps it was included in the soundtrack release (it is listed here as Un Cow-Boy Di Nome Joe), but (luckily) left out in the film. Or did I fall asleep at the same time all the four times I have watched this film?

The film has by the way been working its way into my top fifty.

I remember enjoying the one. I have a pre-cert VHS and the US DVD. It would be nice to see a Blu-ray release. Has there been any composites made to make a more complete version of the film yet? Caught between a rock and a soft place: Paul Martin (Piero Lulli). His nagging wife, Lisa (Pascale Petit) – “For this we left our quiet home. Your position at the university wasn’t enough. The clever young geologist had to show off.” Uh-oh … 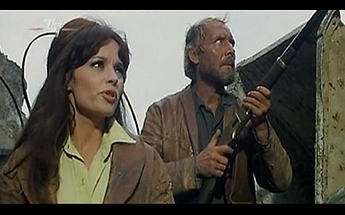 This was a good movie. Will the wife get back in time with help to save her dying husband…

It’s rather ridiculous to have the French version named Ringo, when any idiot and his cat can see ’JOE!' in great big letters

Phew! Many different versions of J. … c. u. p. p. m.! floating around. On YouTube alone: US version (theatrical print); an English version without opening credits; German Tele 5 version (which should have a running time of approximately 84 minutes but actually runs for 88 minutes, see above); and a few more … plus two DVDs of inferior quality, one German, the other American. A proper release of that fine film would be very welcome. Best option so far: French Action HD broadcast (see above) with English and French audio. Valuable information concerning the different versions, releases and television broadcasts is provided by OFDb.de. And, as poor Mr. Martin’s sad fate has taught us, one should never give up a good position at university.