Maybe I will rank Requiem For A Gringo around 20th-25th after another view or two, hopefully after having been able to buy an uncut English speaking DVD or Bluray.

Nowadays, after having watched it around 6 or 7 times at least in just a year I rank it at 10th place on my SW Top 45.
The music, the mood, the scenery/locations and some nice characters are its strongest points. It is my highest ranked 7 out of 10 rated SW so it must be rather close to get a higher, 8/10, rating. 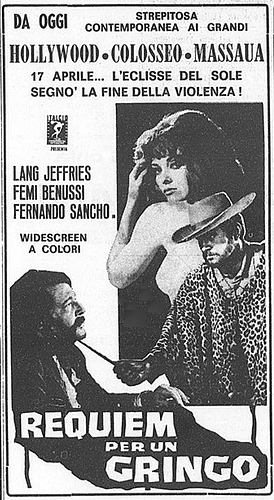 Seen this one now for third or fourth time and I like it more and more for eeverytime. I thought Lang Jeffries was a bit boring at earlier viewings but has no problem with at all now, he does the job!

Like it has been said before, A lot of spaghettis start up very strongly and then falls into limbo with a story that doesn’t know where it’s going and looses it’s flow - Not the case with this one! Straight forward like a tank our hero dressed in a leopard poncho get’s his renvenge. We think it has reached it climax after the flashbacks when he tells Coranza how he has slaughtered his henchmen one by one - but then, bam! We get thrown back right into it when he’s finally coming for Sancho! Very entertaining and certainly creative when you think about how there’s very few extras and not even a western town in the movie

Also the main musical theme is very very good and different.
Otherwise the mood, the style and the locations (Colmenar Viejo) also appeal to me.
Requiem For A Gringo is ranked 10 on my SW Top 40, and the highest ranked with only my 7/10 rating. It is very close to a 8/10.
Carlos Gaddi is perfect for his black-clad character and so are the goodlooking females Marisa Paredes and Femi Benussi. Aldo Sambrell is also nice as a slighly weird henchman to Fernando Sancho’s Carranza.

I agree! Carlos Gaddi looks very mean! He’s also great in the God In Heaven… Arizona on Earth with Peter Lee Lawrence in the lead.