It’s a lot better than his Australian one, that’s for sure.

It’s a lot better than his Australian one, that’s for sure.

LOL … which is only surpassed by, Gene Hackman as the Polish General in ‘A Bridge Too Far’ … that’s off the chart crappiness

Watched the Eureka Italian print with English audio, and realised there’s still a lot to love here … I became aware that it must be 10 years since I sat through the entire movie, or whenever the special edition came along on DVD.

Yep, I’ve just watched the Italian print too (over two sittings, mind) and I really enjoyed it. Like you, I haven’t seen it in years and years - maybe six or so in my case - but, unlike you, I never especially cared for it anyway. I mean the craft on display is undeniable of course but, meh. This time, however, I thought it was excellent. I even enjoyed the slow-mo three’s-a-crowd flashback sequences although they remain pretty bloody weird (Coburn’s grin at the end is bizarrely terrifying, like something from a David Lynch movie). This Italian print felt a bit like I was watching a new movie, or watching it through fresh eyes, or something. Reminded me of Summer just gone when I finally picked up that The Great Silence blu-ray. Changed my appreciation.

The print looks great and the slight yellow tint is noticeable at first, but not intrusive, and adds a warmth to the vivid colours

SLIGHT yellow? This here is the YELLOWEST movie in all of movie history. It makes Lawrence of Arabia look like f#cking Moon!

I’ve burned my retinas because I didn’t view it through one of those contraptions people use to watch eclipses. I’m pretty positive now that this was what was in Marsellus Wallace’s briefcase in Pulp Fiction.

You’re right though: It doesn’t take long at all for your eyes to adjust to it and it actually makes the movie look better, imho (although to be truthful I’m in the minority of one who prefers MGM’s greeny-yellow colour timing on their The Good, the Bad and the Ugly blu-ray).

All in all then, a hugely worthwhile purchase.

I’m pretty positive now that this was what was in Marsellus Wallace’s briefcase in Pulp Fiction .

to be truthful I’m in the minority of one who prefers MGM’s greeny-yellow colour timing on their The Good, the Bad and the Ugly blu-ray

I’ll take that look over the DNR mess of MGM’s first blu-ray and the faded colours of the Kino blu-ray any day.

Does anyone know if the 2.0 audio on the Kino disc is the original mono or is that something only available on the Eureka disc?

I’m not certain but I think the original mono is only available on the UK and Italian Blu-rays.

I just finished watching this for the first time. I watched the version that is on Movieland TV, a Roku channel – it is a 158 minute version, that includes the full flashback sequence at the end.

I thoroughly enjoyed it. There are some continuity issues that are well-noted already in the discussion, and they seem glaring in retrospect, but I barely noticed them as I watched. I thought Steiger was excellent, but yes, I cannot help but feel like Eli Wallach was born to play Juan and that Steiger was essentially channeling his inner Wallach/Tuco to play the role.

A good question but one open to individual interpretation I suppose.
I always thought it was just showing his previous idealism and those ideals being crushed turning him into more of a cynic but whose idealism still lingers underneath. That’s just my take though.

Some good points raised by Phil, in response to this…

Personally, I think that the ‘dream sequences’ are something that most of us, as individuals, can associate with. Some of us may be occasionally guilty of indulging in such ‘dreams’; for reminiscing of happier times is a release from reality. Joyful moments, in a time of tragedy, idealism, and wrong-decision-making, are life-boats worth clinging to.
Just like Sean, in ‘AFOD’, we all get older, but not not necessarily wiser, due to our own personal choices in the past, or present.
And, as with the Sean character, our lives are occasionally filled with regrets. The only reason that we usually don’t drown under such heart-breaking self-stigma, is that remembering the times of joy keep us alive, when all around reigns chaos, and rebellion. 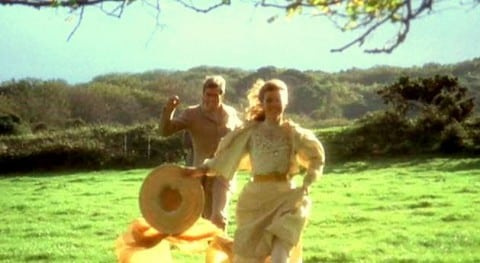 Hopefully, this Vivienne Chandler ‘interview’ may be of interest… 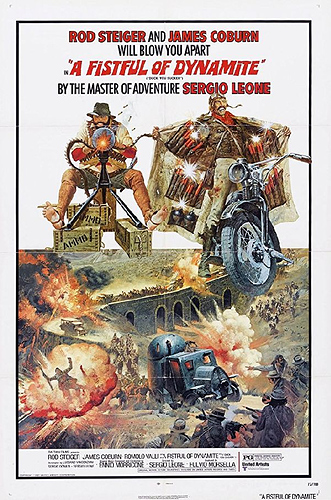 In August, 2007, I managed to contact the late, great, very beautiful Vivienne Chandler, via e-mail.
I asked this lovely lady about her experiences of working with Sergio Leone in ‘A Fistful of Dynamite’, and of being the ‘girl’ in the famous dream sequences.

These were her responses:

"Dear Toscano.
**Sorry I have taken so long to reply. So I will try to answer your questions."

"The scenes in the car were indeed near Dublin, it was in the grounds of a stately home of sorts as I remember it. I think it was about half an hours drive outside Dublin. I have an idea that the field was not at the same location but I seem to remember that somewhere someone pointed out to me where these locations were so I reckon that if you hitch up with members on the Sergio Leone site someone would be able to give you that exact information. I have seen photos of both these locations.

"We stayed in a hotel in Dublin. Again I am so sorry but I can’t remember the name. I seem to remember that it was biggish and nice though!"** 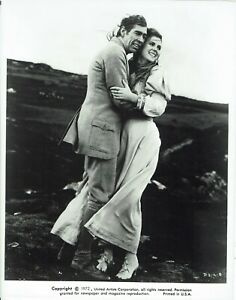 "I might have seen one of Sergio’s films before I was asked to be in this one. I must say that as far as Italian film directors go, at the time I was more of a Fellini or an Antonioni fan! However, watching this one again recently I shall watch some others of his."

"I had heard that ladies didn’t particularly feature in his films. As I have mentioned before he asked to see me several times at the Dorchester hotel in London and when he took me onto the balcony to scrutinise me through the lens he always wore around his neck I seem to remember being amused rather than daunted! He didn’t say a lot but he certainly seemed to know what he was looking for."

"I do feel that he was pointing out that a revolution was a serious act of violence and that families and deep friendships were ripped apart by such deeds. The price paid was very high indeed. The contrast between that and the moving beauty of the lovely final scene was a very important statement." 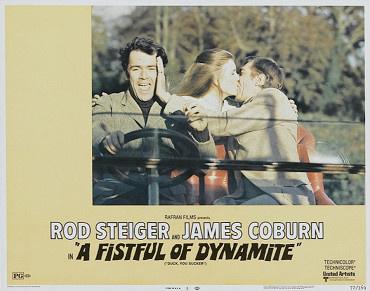 **"My lasting impression of Sergio was that he was a very observant man. He was shrewd and intelligent and had a sense of humour. He was a very good communicator and I felt very well looked after and respected. James Coburn was a real character and so good at what he did. It was a real pleasure to work with him - he was good fun. David Warbeck and I had met before, and we discovered during the filming that we had quite a few friends in common, so we kept in touch for a few years. He was always so exhuberant and positive and full of life. I was sad to learn that he had died."

"I was never daunted by the prospect of working with Sergio, David, and James - just excited!" 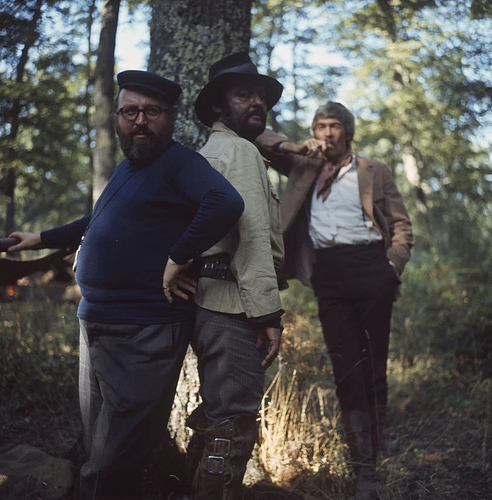 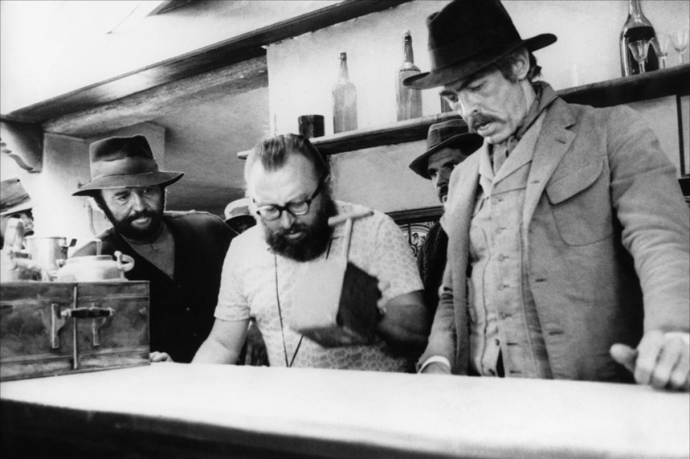 "Why didn’t I carry on with my acting career? Well now, therein lies a tale! Suffice it to say that I had a child and I went to live in France for a while and decided to devote myself to that little person who I felt didn’t really need me to be called away at any time."

"I do hope that this answers your questions. I am sorry that the details you asked for are lacking but as I say I am absolutely sure that the information is out there.
I do hope this helps. If there are any other questions I shall do my best to answer."
Vivienne Chandler 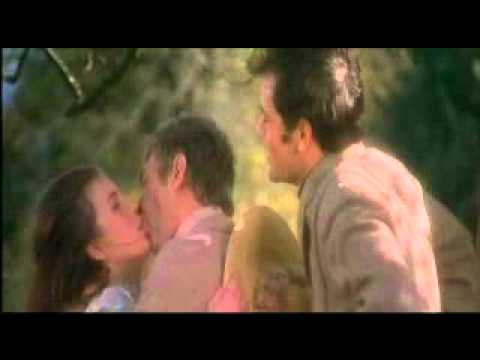 Excellent stuff.
Thanks for sharing Toscano

Yes, thank you … a lovely piece of cinema history, and how nice to have it given personally. Cheers, amigo.

Thanks for the replies and the history! Good stuff. Some good points were made, but I still find the explanations just a bit unsatisfying. For one thing, the flashbacks are almost completely independent of the plot … especially in comparison to say, For A Few Dollars More, where the flashbacks are integral to the plot (e.g., they explain Indio’s morose obsession with and use of the pocket watch and Mortimer’s motivation for hunting Indio down) and have a clear trigger (Indio reflecting on the watch). The most you can say is DYS’s flashbacks suggest why John left Ireland (not actually important to the plot) and contribute peripherally to the theme of betrayal by an intimate and trusted cohort.

The most likely explanation I can come up with for the dream sequences is that at the end, John, having already lit the fuse, chooses to reflect on perhaps the happiest moment of his life, and as he waits for the fuse to burn down and bring his life to an explosive end, we the viewers wait along with him, sharing his reflection. That does not contribute anything to the film’s plot, but I could see how Leone might feel such reflection could be compelling as we all wait in anticipation of that fuse burning to its end. That interpretation is undercut by the fact we do not actually know the fuse has been lit (at least on first viewing), but OK.

It seems strange though that John would choose a reflection culminating in another man passionately kissing his lover. Even if we accept the dubious proposition that sharing a woman with another man was his life’s happiest moment (and convincing us of that could be the point of that giant grin on his face as the other man kisses her), wouldn’t that memory be so imbued with bitterness from that man later betraying him to the British military as to ruin it? Or if the point is he is reflecting on the great love of his life, why not reflect on a memory of her other than one culminating in another man passionately kissing her? Unless perhaps that is the whole point … that life is full of betrayal and happiness is fleeting. But that does not really seem like an overall theme of the film.

Sometimes, its best not to read too deeply into what was - first, and foremost - intended as an emotional, action-filled, action-filled solid slice of escapism.

All right, one more thought, since you asked

In either case, I think Leone’s intent was to have the dream sequence run for the duration of the fuse.

In either case, I think Leone’s intent was to have the dream sequence run for the duration of the fuse.

Yeah, nice idea about the 30 seconds. I don’t recall noticing that before.