In the background we spot a lone rider, in the foreground the barrel of a gun. Having seen For a few dollars more, we expect to hear a shot. But what looked like a barrel, turns out to be a piece of wood. It’s the first in a series of references to Leone, most of them with an added comical twist. The luckiest strike is a Colonel Mortimer-like character, who seeks revenge on his own wife (!) It will be clear that this movie doesn’t take itself too seriously (we even see the main character in women’s clothes!), still it’s not a neat comedy : made during the heydays of the genre, the violence is quite potent and the protagonist behaviour sometimes downright amoral. The tone is immediately set in the opening scene. The lone rider we spotted in the background, is invited by Django (Saxson) to sit down at his camp fire. He is a bounty killer and his victim is a man called Garvin. In this film Django’s real name is Garvin too, and the dead man is his father. So Django shoots the bounty killer, takes his father’s body into town, and collects the bounty himself! In town he is told by the local weirdo Gordon (who likes the smell of money so much he preferably hangs around in the local bank) that he has become the co-owner of both the bank and the saloon. It soon becomes clear that his father was framed by his business partner Kluster, who now wants to get rid of the son …

Clearly re-titled to cash in on Corbucci’s landmark movie, the character played by Saxson (in real life Dutch producer/actor Roel Bos) has little in common with the legendary avenger with a machine gun hidden in his coffin. His is a rather cheerful guy with a keen eye for the ladies, closer to Gemma’s Ringo than Nero’s Django. Although his father’s death sets things in motion, he can hardly be called an avenger. In fact he must defend himself almost constantly, first in a series of rumbustious fistfights with Kluster’s henchmen, later in protracted shoot out in which he is severely wounded (if only for a few hours). The storyline brings De Martino’s film more into line with the so-called ‘populist’ spaghetti westerns, in which the protagonist takes on one or more corrupt dignitaries, reflecting the popular Italian belief that no dignitary can ever be trusted (tutti ladri = all thieves). Those type of westerns also reflect the opposition between the relatively backward, rural South and the more sophisticated, urbanized North. This idea is cleverly symbolized by the film’s magnificent costume design: Django wears the worn-out outfit of the countryman, while in town people wear the most impressive costumes ever seen in a spaghetti western: not only Kluster and his wife look ultra-chic, even Kluster’s henchman is well-dressed and Sancho looks as if he’s preparing for the catwalks of Milan.

Saxson lacks the charisma of a Nero of a Gemma, but makes this up with a laconic acting style that comes close to self parody. Excellent support is given by Sancho, in a rare performance as the hero’s comical side-kick, and Galli/Stewart, as the evil woman who seduces (and nearly ruins) every man she meets. The script is more elaborate than usual, but rather inconsistent, juxtaposing violent scenes with comedy scenes that flirt with slapstick. De Martino makes excellent use of the widescreen, especially during the film’s best scene, set among grass-grown rocks, when the four main characters approach the camera from different angles. Enzo Girolami (Castellari) was assistent-director, and it wouldn’t surprise me if he was responsable for those rumbustious fistfights. Bruno Nicolai score is good without being outstandig.

Conclusion: Until recently, Django spara per primo was a relatively unknown spaghetti western, but it has attracted some attention thanks to a Canal + owned print, that was shown on German television and was also used for the British Cinema Club DVD release. It’s not one of the Great Spaghettis; the film simply is too much of a hodgepodge to make a lasting impression, still it certainly is worth a look for genre fans. And don’t miss that hilarious last scene, in which George Eastman arrives in town and - mirrorring Saxson’s arrival - introduces himself as … well, see for yourself.

Excellent write up again scherpy.
I remember this one (having the studio-canal version in English), as pretty lightweight but some good touches. It’ll need another viewing. I liked Saxson in this, and I do remember a chuckle at the ending.

(I’ve also got one of those mad and gaudy Thai posters for this.)

I have an english language 2.35 version of this film, but the dubbing looks a bit out of sinc :).

Oh yes, please. The german TV was about 84 min, which is equivalent to the german theatrical running time of 87 min.
If so, I need not to get this english version and I stick to my recording.

Scherp, I see this enjoyable film exactly as you do.

Only the year of release was 66, Django spara per primo premiered in Italy on 28.10. 66. Half a year after Corbucci’s Django.

I have the ITALIAN DVD of this Fine SW and it says Fully Uncut, Restored From Digital etc

[quote=“stanton, post:7, topic:915”]Scherp, I see this enjoyable film exactly as you do.

Only the year of release was 66,
http://www.spaghetti-western.net/index.php/Django_spara_per_primo[/quote]
Sigh! If only they left the ‘comedy’ elements like this - “enjoyable”. 5 years later and it’s reduced to slapstick - oh dear!

[quote=“stanton, post:7, topic:915”]Oh yes, please. The german TV was about 84 min, which is equivalent to the german theatrical running time of 87 min.
If so, I need not to get this english version and I stick to my recording.[/quote]

I guess you misunderstood, Stanton. I used the German TV version for this review.
Like you say it runs little over 80 minutes, so apparently something’s missing; if they used the studio/canal print for the Cinema Cub DVD (and as far I know they did) this is very odd. I suppose they used the old dubbing, so simply cut those scenes that weren’t dubbed in the sixties. I must say that the dub was very strong and clear, so my first impression was that it was of recent date.

Anyway, it would be interesting to know what is missing exactly

I have seen a 92 min version, which must have used the british DVD as a source.

It’s in Italian with engl. subs but there is also a english dub, which is unfortunately out of sync, seems to be a fan made boot. I also had to adjust on my DVD player the aspect ratio to get the correct image.

Good picture quality, but the german TV version was the better one with beautiful colors, so maybe this is not the Studio Canal print.

This version had several extra scenes totaling up to 8,20 min. So the running time of the film is about 96 min.

God, this film is highly enjoyable, I liked it now even more while watching it for the 2nd time.

The story is not too original, but it’s better developed than in most of the similar constructed SWs.

But De Martino’s direction is marvelous, his framing and staging of the scenes is often delicious. For me the best directed SW of 66 behind GBU and Django.

Saxon is charismatic in the lead, but is topped by Ida Galli and Fernando Sancho, who gives a wonderful sidekick, maybe his best SW role.

I recorded this one from TV and watched it today.

One thing, that is remarkable: Sancho as a sidekick.

Usually I hate sidekicks, but Sancho is OK. There’s not so much humor in his role, so it works for me.

Saxon could be less sunnyboy-ish and more Django.

Montefiori in the end left me speechless… is this the same Montefiori as in man-eater?

The sense of self-awareness and the in-jokes are its key strengths.

Decent flick. Glenn Saxon plays it tongue and cheek and does a good job. Would’ve been better if it cut down on the trinity-esque brawls. Nice to see fernando sancho play a good guy for once. Also nice to see George Eastman in a surprise appearance. The mortimer dressed “doc” character was very similar to Lawrence Dobkin in Johnny Yuma.

Saw this one recently, the out of sync english language version.

Found it average at best and, apart from a few spaghettiesque camera-angles, very American in style.

The costumes looked like a Hollywood western and everybody had broad American accents, even Fernando Sancho was dubbed in such a voice :o

It surprises me you don’t mention the ‘annoying kid’ , since you normally always do it

He didn’t bother me, but was also ‘too much Hollywood’ here. I think this was the boy who also played the outcast Mexican kid in Face To Face, the one who gets shot during the bank robbery.

The plot was uninteresting to me, and Nicolai’s score surprisingly lacklustre.

Best part was George Eastman’s entrance at the end, the only stuff with a little spice and humour in this dull movie.

Saw this one recently, the out of sync english language version.

I have had this dvd r for a couple of years and still not watched it. I think I may wait for the Dorado films release as all of their westerns they have released so far have had english audio. I know the UK release is supposed to be good quality, but no english audio of course.

It surprises me you don’t mention the ‘annoying kid’ , since you normally always do it

Hmmm… where was that kid? Can’t remember. And you’re right. I’m a passionate hater of such kids myself and I didn’t mention it…

The Cinema Club actually looks to have slightly more vibrant colors… comparing the scenes, it looks like they are both using basically the same AR. Looking at the edges, I can’t see any difference in what is on screen. There also appears to be a bit less noise on the Dorado image. Since the subtitles are burned in, I couldn’t get screenshots without subs on the Cinema Club disc 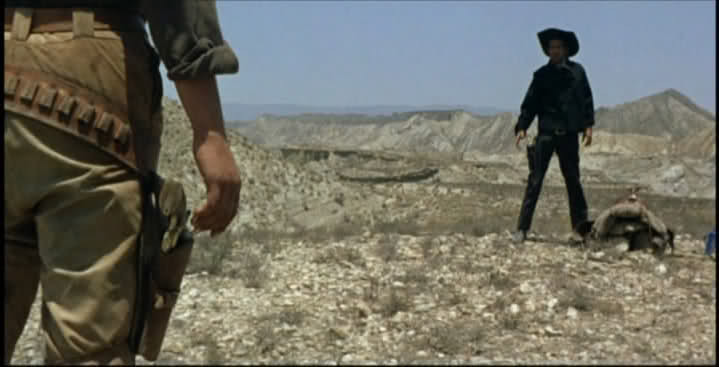 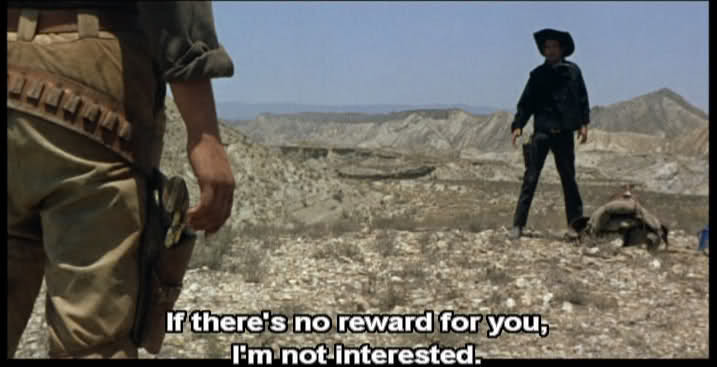 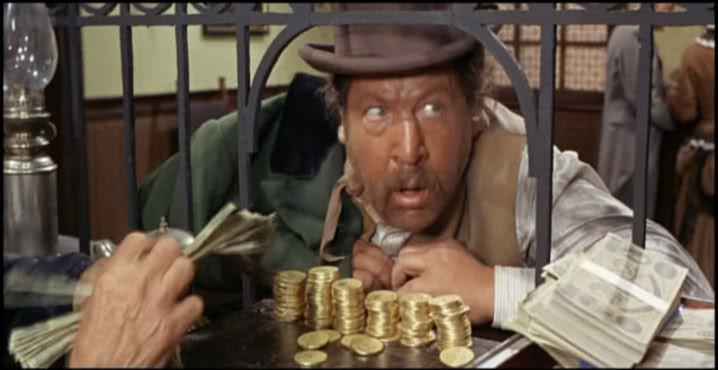 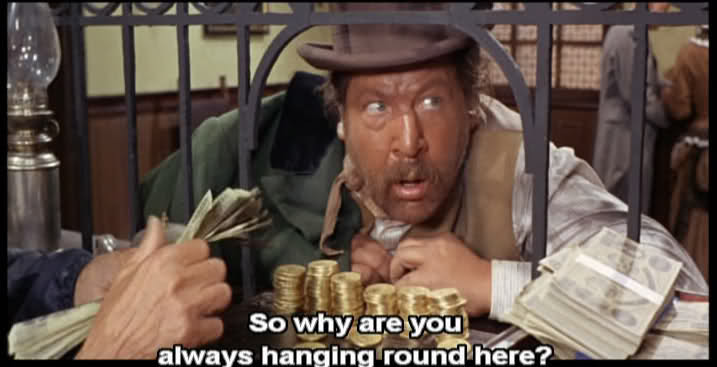 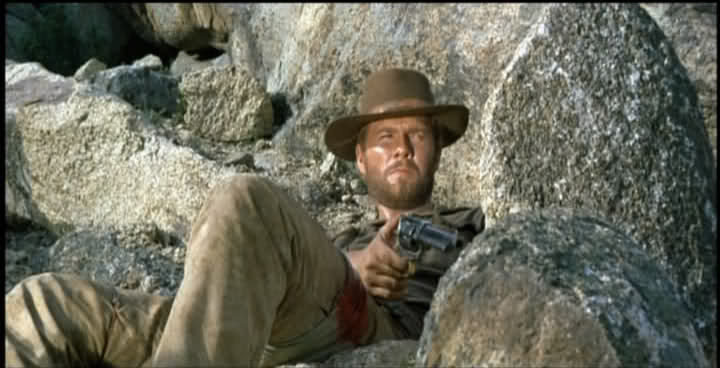 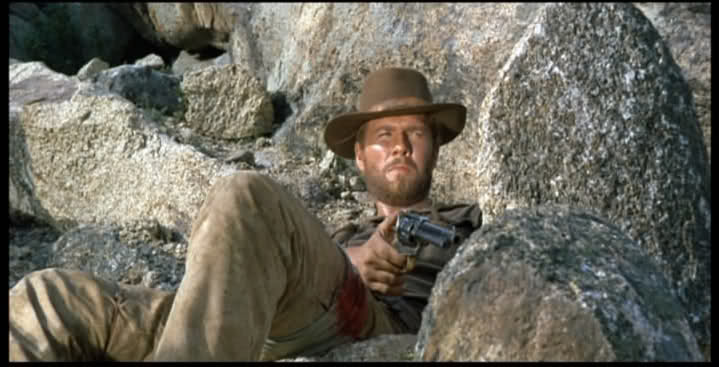 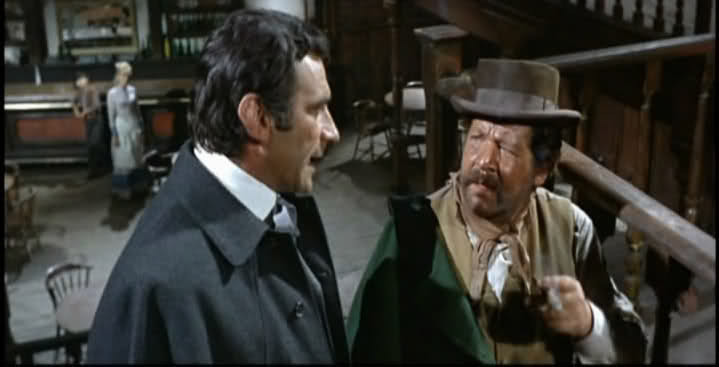 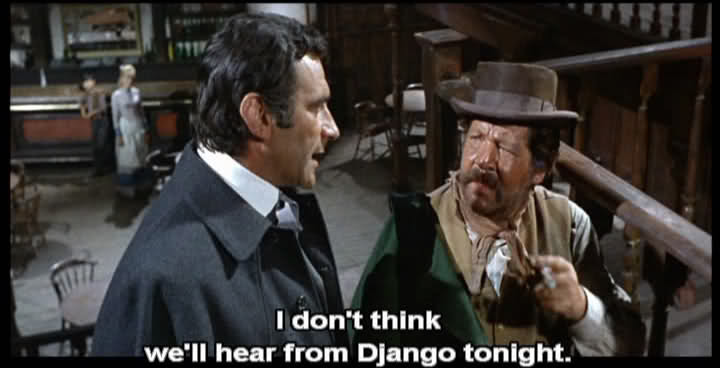 edit I originally posted something about the AR being encoded wrong on the Cinema Club disc, but after taking a second look I think it is just a problem with my screenshot program- SO I have corrected the screenshots.

All in all, image quality is about the same, but the addition of the English audio track and removal of burned in subtitles makes the Dorado a better release for me.

Thanks for this Autephex. Looking forward to getting the Dorado release.