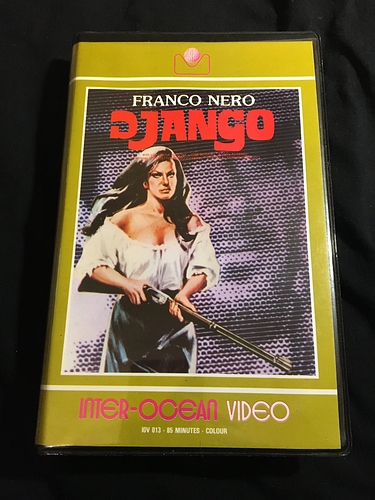 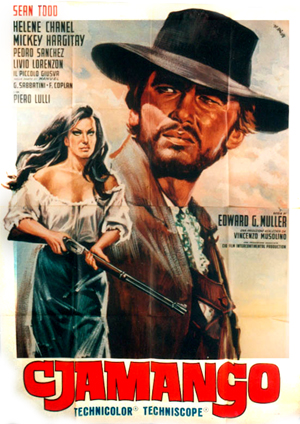 Django is an amazing film that has influenced many works of art and fiction today, such as paving the way for ‘‘Django Unchained’’, or a certain character in the episode ‘‘Mushroom Samba’’ of Cowboy Bebop. It has some of the most amazing action scenes of its time, and anyone who hasn’t seen this classic needs to ASAP.

Extranjero, your thoughts about Django and Corbucci are quite interesting, but differ from mine in some aspects.

The editing (by Nino Baragli, Leone’s editor of choice) is excellent and the action scenes superbly choreographed. In the saloon shootout, notice how the man by the door falls out of one shot and into the next, making that sequence a single fluid moment.

Yes, the saloon shoot-out is excellently filmed and edited, but the 3 big actions scenes are not, they are mostly disappointing for me, the editing is often lame, and the film suffers from that. Similar btw to FoD, in which Leone created this SW kind of quickly edited shootouts, but also fails to find a concept which make the larger action scenes work.
Leone did not really knew how to make them work, as later Giu la testa still showed, but Corbucci mastered this with his later editor Eugenio Alabiso, and especially Il mercenario and Companeros have a brilliance for these bigger action scenes, you don’t find in any other Spag.
It may sound insolent, but I wish I could re-edit the shoot-out with Jackson’s clan men, in which Django reveals the secret of his coffin, which is conceptually brilliant.

I haven’t seen Corbucci’s first westerns, Red Pastures and Massacre at the Grand Canyon, but by all accounts they follow the conventional American form. Django seems to come from nowhere, a work of genius, inspiring the best from everyone involved. In terms of quality, I think only The Hellbenders comes close to it in the director’s later work.

Red Pastures and Massacre at the Grand Canyon are 2 English titles for the same film, and Corbucci himself said he shot only a few scenes as hired hand for that one, and actually the film does not look for a second like a Corbucci western, but we don’t know for sure.
Django was indeed a big, big step forwards for Corbucci, but the 2 Spags he made before Django show that he had already the potential.

The Great Silence is a tremendous film but much more flawed, both technically and structurally. A Professional Gun is spectacular but shallow and Companeros is an undisciplined re-hash of it.

Here my views differ completely.
The Hellbenders is a forgettable film for me, and I think Django could have become a perfect film if made later in his career, if he had filmed this screenplay in 1967 or 1968, with a slightly bigger budget, with the experience he garnered especially with Navajo Joe, another “hired hand Spag”.
The Great Silence benefits from this experience, and is therefore for me clearly superior to Django, which is for me the flawed one of these 2, and Il mercenario was then a bold step in a different direction.
You think Il mercenario is shallow, I think it is a complex film, even his best (but with The Great Silence being on the same level), one which showed to what genre innnovations the SW was able.
In his 3 best westerns (and Django is of course one of them) Corbucci did things which were ahead of its time, alas he then stopped soon making good films at all, and after the partly brilliantly filmed Companeros, he lost by an by even any of the skills he had developed in the second half of the 60s.

Great piece Stanton, Cox would be green with envy.

Watched the German BluRay, which offers neither decent audio (watched it in German) nor video. In fact it looks rather atrocious in many parts and sounds just as bad in others. But some parts are okay. Oh well, at some point I shall get my hands on one of these elusive Arrow discs, wondering how pristine that new transfer is. By the way what stuck with me the most: Interesting that the movie already used the El Chuncho theme, anyone else find that interesting? Or lame on part of Damiani to recycle it? Aside from that, after many many years of not seeing it, it was quite refreshing to get a new take on the film after so much distance. Django is… don’t shoot me … not the greatest movie, not by a long shot. But it is full of cool lines, money shots and iconography. No wonder it had such an impact, it delivered brutal violence in an almost supernatural way - and it was kinda cool. A rowdy action flick with violent takedowns and cardboard bad guys, a mystical stranger and memorable music. And the main guy real was an anti-hero, in the true sense. Even when he tries to do good, he fails. It is a sinister and discouraging movie, almost fascinating by itself that it got made this way. Another interesting thing is that IMDb says Ruggero Deodato is uncredited while in fact I spotted him in the opening credits.

Good analysis of the movie. I feel the opening song and imagery of the mysterious stranger was so well done that what followed had to be a letdown. The ending is tremendous and really depressing. But the rest is kind of disjointed. The middle part with the wagon and the robbery feels like a whole other movie.

But it’s Corbucci so you know he’s going to take chances which can be really cool and really sloppy. But I’ll take that any day over a boring, typical American Western.

Yeah, they really didn’t seem to care about mixing up the artwork back in the day!

Btw, I there is a topic about bad and funny sw cover art. Seems just that some of the pics don’t work anymore as it’s quite old topic.

So, what are your favorite bad or unintentionally funny cover artworks you’ve seen on spaghetti western releases: vhs, dvd, soundtrack or whatever. I recently found this pic of australian vhs of Dirty Dogs. Yeah, picture of Almeria. That must be a thrilling film.

Thanks for that. Just added two funny ones from my own collection.

I feel the opening song and imagery of the mysterious stranger was so well done that what followed had to be a letdown. The ending is tremendous and really depressing

Are you sure with the ending you’re not thinking of Corbucci’s other classic Il Grande Silenzio (The Great Silence)? That is a truly nihilistic ending. The ending of Django is definitely ant-climatic to an extent, but is still satisfying.

And yes, the middle is a little unusual and all of a sudden goes in a different direction, but given Django’s plans, it does make sense.

The key to really enjoying Django, is watching it in the original Italian language with properly translated subtitles. I can’t even begin to number the countless reviews I’ve seen of how incredibly aweful the English dub is, and how wooden as well.

That fans are really praising the original Italian is really something as it shows how a fabulous story can be ruined when the language isn’t translated into another properly.

The key to really enjoying Django, is watching it in the original Italian language with properly translated subtitles. I can’t even begin to number the countless reviews I’ve seen of how incredibly aweful the English dub is, and how wooden as well.

that is true. The German one is a lot better, but still quite a step away from the original script

The English dubbing also destroys Django’s mystique. He has a high pitched voice.

No both movies have depressing endings. Great Silence is striking while Django is like a limp to the finish.

I think the movie is just about good enough to transcend one of THE worst dubbing jobs. Much better in Italian.

I still like to think it ends with Maria dead and Django crippled for life. It just makes the movie more interesting and true to the rest of the film to take the most pessimistic interpretation possible!

I think pessimistic endings were Corbucci’s thing. I think he did them brilliantly. Sure they were… Pessimistic but I never finished his films feeling down.

I think the movie is just about good enough to transcend one of THE worst dubbing jobs. Much better in Italian.

Agreed. I refuse to watch ‘Django’ in anything but the original Italian language. The English dubbing track is execrable.

How do other dubs compare, e.g. French?

I often wondered this in the past. Does the German dub include the final benediction? The English version makes the movie particularly senseless in that regard.

what do you mean by that?