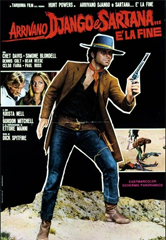 Maniac outlaw Burt Kelly (Mitchell) decides he needs a hostage to make his escape to Mexico, so he orders the kidnapping of a local rancher’s daughter (Blondell). This raises the prices on the gang, drawing the attention of vicious bounty hunter, Django (Powers). Crazy Burt, fearing Sartana (Davis), the local protector of the common people, will be after him decides to elimanate this obstacle, bringing the bounty killer and the people’s hero together with a common objective. This Demofilo Fidani directed spaghetti western was photographed by Aristide Massaccesi, later notorious as cult filmmaker, Joe D’Amato.

I watched this flick a couple of days ago and consider it terrible; there are so many flaws that perhaps deserve a list (bad acting, mediocre story line, etc.). In such a mess only Gordon Mitchell craziness looks good.
Anyway, since there are some Fidani’s followers in this board I would like to read some opinions.

Uh I consider myself one of Fidani’s followers in the sense that I don’t see all his movies as pure crap. I wrote this little bit after seeing the movie some 6 months ago:

Another Demofilo Fidani flick so was expecting something perhaps not great but at least entertaining in the same weird way these Fidani’s usually are (for me at least). But boy was this one nearly one great piece of crap. A LOT of wasted time spent watching people riding from one place to another with nothing happening at all, card games carrying on for ever and ever, hell even the end credits travel on at the most slow speed I have ever seen, all so this piece of rotten film can fill in it’s 83 minutes.

The score by Coriolano Gori is fine aswell as it was in the other 10 or so movies that sports it. The only really good thing about the movie is in fact Gordon Mitchell which plays the deranged gang leader but unfortunately he isn’t given much screen time.

Play good attention to the title of this movie, it does spell doom and that is what you get.

Avoid unless you want to watch it all like me.

If this is the only Fidani-movie you’ve seen though you shouldn’t let this one put you off as the man has made some much finer stuff in the genre. Check out Dead Men Don’t Make Shadows just released by WE… My up till now favourite Fidani-western (haven’t seen them all).

Yes. I’ve purchased that one from Amazon, but it is still on the way. I’ve seen at least two other flicks from this director: Era Sam Wallach… lo chiamavano ‘così sia’ and Per una bara piena di dollari. The second seems to me less painful…

Haven’t seen it yet, but after reading what you both say about it, I surely will

The trailer (use the link to p.p.'s site) looks quite good, lot of action, very low-budget, an outrageous Mitchell, a woman who looks attractive in an odd, dangerous way (a man eater, Nelly Furtado must have seen this movie. By the way, isn’t she Portuegese?)

Yes. Nelly Furtado was born in Canada, but she’s daughter of Portuguese emigrants (Azores islands).
Despite their Portuguese roots she’s now releasing a LP sung in Spanish :o
Ok, she sang the official anthem of the 2004 Euro football championship too… for once in Portuguese!

Sören sasys how it is.

This is indeed a 0/10 film in which the greatest diversification was when the senseless riding around riders enter the screen from the right instead from the left.
Simon Blondell was extremely bad, in fact she doesn’t act act at all. And it was funny to spot the same plastic cactus, which should suggest a Mexican setting, again and again at different places.

If I have to name the worst Spagy seen so far, this is a very strong contender.

Yes, these ones are much better, although also not really good.

Despite their Portuguese roots she’s now releasing a LP sung in Spanish :o

Dear me, that’s like a Flemish singer singing with an Amsterdam dialect

And it was funny to spot the same plastic cactus, who should suggest a mexican setting, again and again at different places.

Yeah I spot this fake cactus too. Even worst: there is a shooting scene where the bandits are shot from one location and clearly fall down - in slow motion - from another completely different (it looked like some beach to me). Hilarious!

Dear me, that’s like a Flemish singer singing with an Amsterdam dialect

Exactly. But were all “easy going” people, everything will be forgiven. You’ll see!

It is not easy to read even with online translator. But I think I got the whole idea.

This is the first Fidani i’ve come across that i didn’t care for. Mostly for the same reasons Soren already stated, still sure i’ll give it another go someday.

It is not easy to read even with online translator. But I think I got the whole idea.

Haha, thanks for taking the effort.

People that don’t like this film are either not inebriated enough when they watch it or have very little sense of humour. One of the worst? Come on! Kid Vengeance, Trinity & Sartana, On the Third Day Arrived the Crow, Finders Killers, Drummer of Vengeance… Do you really want me to name 50 more? All way worse in the fun department.

And Blondell bad? Come on. Come on!

How the fuck can you say that?

People that don’t like this film are either not inebriated enough when they watch it or have very little sense of humour.

I believe that it depends very much in what mood you’re in when you put the movie on… I’m sure the movie will be more fun the second time around at least then you know what to expect… If I had read this whole thread before watching it I’m sure I would have appreciated it more too. But at the time I was just disappointed… Mitchell was excellent but sadly followed by endless horse rides, and the longest poker game in sw history … Possible the movie is better seen when one is drunk or extremely high on something… I can’t know in what state you saw it BL, but you are from Holland

That is something I might try one of these days!

And Blondell bad? Come on. Come on!

Yeah! She’s gorgeous and got that killer look!
As I recall she does a similar role in Fidani’s “Per una bara piena di dollari”.

Django and Sartana are two characters who have won their spurs in spaghetti western land. Trash director Demofilo Fidani put both men in one and the same film twice in 1970. Half of the output is called Arrivo Django e Sartana… è la fine.

Hunt Powers is a (bad) joke compared to Gianni Garko (the original Sartana) en Franco Borelli isn’t fit to hold a candle (let alone a machine gun) to Franco Nero (the original Django). But come on, who cares about those things? I don’t, that’s for sure. The English title even promises us a real “showdown in the west” starring this super pair of heroes. If such an outlook doesn’t kick ass, I might be a Dutchman.

“What the hell are these doing in one movie?” some people might want to know. Now then, the gang of psychopathic outlaw Burt Keller (Gordon Mitchell) has kidnapped a beautiful girl. They want to finance their escape plan to Mexico with her, but their problem is that she’s the daughter of a rich fellow, who’s a bit too eager to pay. Bounty hunter Django thinks this is mighty interesting. Moreover the bandits all have a nice price on their head. And Sartana? Well, in this movie he’s some kind of Robin Hood. When the question is asked why he is such a nice guy, the answer is : “Because he’s Sartana, of course!”

Burt Keller is the main villain and at the same time the most entertaining character. Burt is a gang leader, but if you start analyzing him, you’ll soon ask why all gang members obey his orders. He can’t read nor write, is very short-tempered and plays cards all by himself. That’s not very radical, some may say, but they might change their opinion when you know he’s playing poker with the guy in the mirror. And what’s worse: Burt thinks the guy in the mirror is cheating! This makes him kinda aggressive. And it sure doesn’t help that Django and Sartana are looking for him.

Gordon Mitchell is downright hilarious as Burt Keller. I doubled up with laughter watching him. I also had a lot of fun with the excruciatingly bad fistfights, and (even more so) with all the guys who were shot. Every time a bullet hits its target, the man in question has a completely unnatural, spasmodic and athletic reaction. And what’s more: after his pirouette, every dead man rolls over at least ten times before remaining immobile for ever and ever. Wonderful!

It’s not hard to understand why this movie is a nightmare to many people. But in my opinion, the kind of badness we’re offered here, is the equivalent of higher maths. More: it verges on the brilliance. The soundtrack by first rate composer Lallo Gorri, assembled from a handful of other spaghetti western soundtracks, adds to the atmosphere. And then I haven’t even mentioned the (no less than four) delicious blond girls …
There are two kinds of people in this world: those who start looking for this film after reading this review, and those who don’t. Whatever you do, don’t tell me I didn’t warn you that you were in for a very bad treat.

Great! Thanks!
I think it should be included in SWDB info page. Someone?!

Great review! I’m the kind who will try to watch this film as soon as possible!

EDIT: Good work with putting i in the database P.Pereira!