Watched it for the third time now, as I never reviewed it. So here it is, in Dutch:

Though I basically agree with the review at Fistful of Pasta (http://fistfulofpasta.com/index.php?go=reviews/deathsweet) I didn’t mind it that much. It’s just one of those lackluster spaghettis I sort of like anyway. 6/10

This one uses some footage from Durango Is Coming, Pay or Die or vice versa as I remember.

Yeah, I think Harris’ character is named Durango in the Italian version. The other film was a year earlier and also features Jose Torres. Haven’t seen that one by the way.

Think you will not mind Durango Is Coming, Pay or Die as you did not mind Django Adios

. Durango Is Coming, Pay or Die ranks in a Spaghetti that has the most swearing in with say Sonny and Jed.

Will check it out some time.

I have always loved the poster artwork of this movie 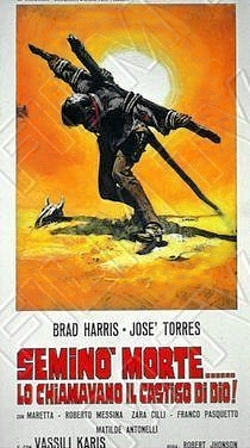 It’s been years since I saw this, was there really a scene like this in the film?

No, can’t recall. Great poster though indeed. Kind of like the Italian one for Three Bullets for a Long Gun.

Just viewed this one again, probably for the third time. Harris does an excellent job of acting wooden, sort of looks pretty wooden aswell. Heard he is better in euro crime stuff. Short film though and this is a routine Spaghetti as mentioned above. Even so, film kept me watching.

I didn’t see a forum post for this one so I figured I’d start. Just watched this film last night having just watched Roberto Mauri’s “Shotgun” the night before. The story is pretty typical and the contains every cliche in the book… including the one that ruined it for me – a comic relief type roll brought on by the character Santo. The best part of the film was definitely the soundtrack by Vasili Kojucharov
, but even that was lacking. Well, “Shotgun” was a killer movie… this one was just a dud!

There is this thread:

Had heard this one re-uses footage from Durango is Coming so, having watched that one a short while ago, thought I’d give it a whirl.
A mistake I think. Maybe if the previous film wasn’t so fresh in my memory I could have washed over the recycling but it proved too much of a spoiler for me at the moment. That said, some scenes transfer surprisingly well with their redub but too many are an absolute mess, with clumsy editing between different sources that don’t match up as seamlessly as the producers obviously hoped they would. Torres’ character, who had been the bright spot in Durango, has no consistancy here (not surprisingly) and becomes confusing and just plain annoying. Harris becomes practically a cardboard cut out (even less substantial to the wooden actor others thought him to be earlier) and the scenes where there are gunfights taking place in what is clearly two separate rooms just pushed me a bit too far.

Never got to the end. Maybe I will one day but not for a while I don’t think.

The poster is a killer though. One of the best in the genre. A travesty to have it linked to this mercenary mash up of a production.

It also borrows some scenes from WANTED SABATA. Worst Mauri’s in my personal count, but I didn’t see them all.

@ Worst Mauri’s in my personal count, but I didn’t see them all.

I wouldn’t be too worried about that, if I were you Pedro.

Considering the release date, ‎it is quite likely that source of inspiration for the evocative poster was the ‘crucifixion’ scene in Valdez Is Coming!

Watched this the other week and liked it a lot. Nothing particularly notable for those who are only interested in the best of the best, but for the rest of us, this is a little gold or maybe silver nugget for our upper-bottom-shelf of highly watchable spaghettis.

I just got this in the Django Collection vol. 2, and I can confirm that this movie is at least 50% of just re-edited footage from Durango is Coming, Pay or Die, and while I haven’t seen it I would assume the other 50% are just taken from Wanted Sabbata. Possibly making the the only SW cheaper than Django Story.

Because this movie is a cut and paste film Ken Wood appears twice in it as two different characters and gets killed by Harris both times.

I’d like to get the Dutch video for pleasure VHS if anyone has a copy to spare.

Not too sure. Hoping for the best deal I can get. The only VFP tape that I own is Black Killer. I’d love to get some of the other releases. The artwork is really nice. This is the top one on my list along with Django the Runner and the Carambola films.