Warning - This review will contain spoilers, a donkey, fake succulents, and opinions.

So – we are in the presence of two of the best (but shadow-wise conflicting) titles, for but only one spaghetti western. 8) There may be a general rule in spaghettiland that the better the title, the worse the movie? Will this be another case in point? After all, it is a Fidani!
And the film does indeed begin with both a corpse and a shadow, so we could at least contemplate their metaphorical value should we be at all bothered. Most noticeably, one of the shadows is both a stylish and seamless extension of the black-clad bounty killer Lazar Peacock, (played by Fidani-fave Hunt Powers), who is dragging the ‘wanted’ body into town by his gun belt. Collecting the reward, but answering the sheriff’s question about missing gold with only a smug smirk as silent reply, would have us questioning as well – about Lazar’s honesty. But of course, dead men don’t talk (as well as not making shadows).
All is boding well so far in spaghetti-land, and it still to get better yet. An organ pipes up perfectly to herald our second protagonist – a broodingly silent individual who somehow combines a look that melds the boyishness of a Terence Hill with the altogether darker worldly-wise fatalism of Trintignant’s Silence – complete with the latter’s stubbly beard, frowned eyes and scarf look.
And if Lazar’s on the trail of bounty (and gold), then Blonde (Chet Davis) is on the trail of Lazar. He follows signpost to town, followed by more signposts and towns, and ripped down Wanted posters and collected bounty, until he arrives ahead of Lazar, as illustrated by the still intact poster showing Roger Murdoch’s ugly $12,000 mug. This poster also signals Gordon Mitchell’s short cameo role, but it is used to good effect as he magnificently overacts, gurning and grovelling to his demise from Lazar’s custom screw-on extension barrelled pistol. OOoops! But then it’s not? But other than this small continuity error regarding its on-ness or off-ness, this film has started damn near perfect imo. (But can this form continue – it is a Fidani after all?)

And it does so for now. We’re straight back into cool style-on-a-budget, as Lazar heads off to have his dead-mans gold buried in the most bijou graveyard of the genre, guarded by a cute donkey and a lame-legged ol’ scrote. The latter babbles on about having his innocence proved, something which seems highly important to the ol’ wingebag, but both Lazar and the donkey seem unmoved by his plight.

Back in town, Blonde’s holed up and showing off his shooting credentials to another ol’ scrote until Lazar arrives to collect the reward. So far, so great! We sense for certain now that our two protagonists are fated together, and wonder on what terms they are destined to meet. Maybe in uneasy alliance, or perchance in vengeful showdown, – and of course, even better… if they were to be in both?! :

As this is true spaghetti-land, it is off, over the border we must go – to spaghetti-mexi-land - for some sadistic whip-cracking, cracking senorita action and cackling Mexican bandito clichés. And we start with Medina, as nearly an over-the-top Mexican as you can imagine. 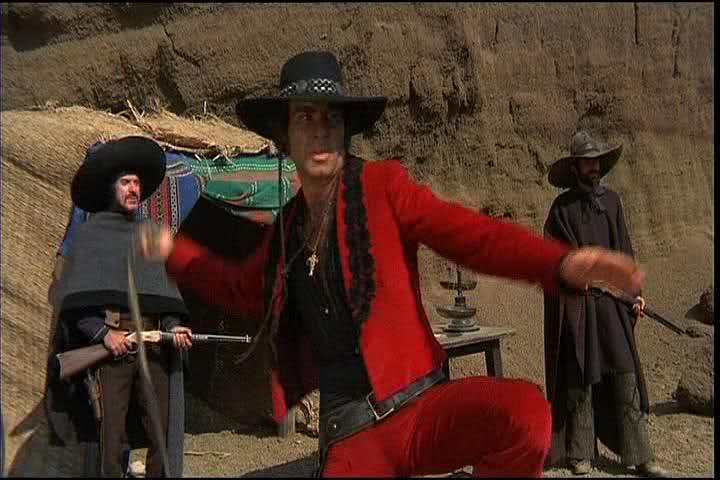 Whip-wielding, hoop ear-ringed, scarlet suited - he is the mine manager in the employ of fat-cat, white suited gringo, Senor Barrett, and it is he that dispenses the lashes to the peons who work for a pittance in the mine. But, if he’s in the latter’s employ, he’s more intriguingly under the spell of the blisteringly ice-blue-eyed beauty, and her lashes of a different kind… of the gypsy dream-weaver and fortune-teller, Maya.
And who wouldn’t be, I ask ya?! Simone Blondel (Fidani’s daughter) plays the part excellently and suits the dark dusky look that she affects for this role. 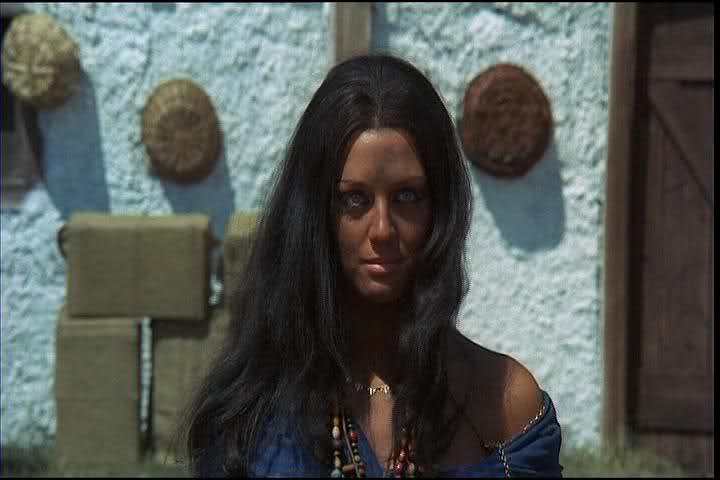 And so it is to this background that our protagonists will meet, to be beaten and shot at, to deal and double-cross, one to be driven into the affections of Maya’s heart, the other to her hatred.
And then the background gets even more colourful because of course it’s festival day, and we get happy mexi-music, and dancing from Maya, and great camera angles and filming from Aristide Massaccessi /Arizona Massachusset / Joe D’Amato… who likes Maya’s legs nearly as much as I do.
Well, I haven’t been in the slightest bit disappointed so far.
Now if we could only conclude with a double double-cross, some acrobatic shootings, a well choreographed fight for Medina to get his comeuppance in, a slo-mo flashback, and a final confrontation by an open coffin full of gold, then all would be perfect. But this couldn’t happen surely? After all, it’s a Fidani!

(OK… ok – edit. It’s not the 5 star film I seem to be pointing at with my naive gushings, but it is jolly good though. There are faults, (this is spaghetti-land after all), but it is not the “uninspired … turkey” one forumite would have us believe, (imo - and of others – there seems to be some fondness for this piece of Deemworld?). Neither does it rely on protracted shootouts with never emptying guns, and the flamboyant aerial pirouettes of death that Fidani is renowned for. This is a reasonably slowly paced - (think Night of the Serpent/ A Bullet Between the Eyes here maybe), - reasonably storied, well charactered film, and it makes the most of a tight budget, getting ‘more for less’ much better than some. It gets the best from a cardboard and papier-mâché Mexican village, and what he does with two plastic cacti to transform bits of quarry into Mexico/ borderland is superb (just see how many times they pop up throughout this film!) 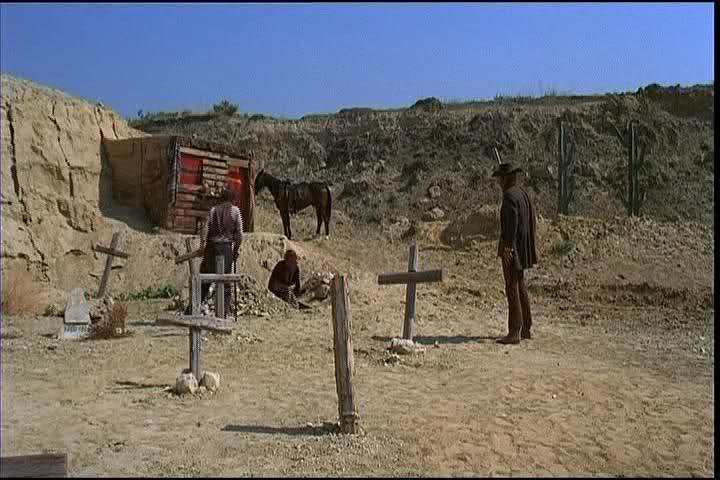 A couple of scoops of cider, and settling down to this for 90 minutes? I reckon I’ll be making the trip again soon.

So - 2 plastic cacti, a cute donkey, and 4 stars from the Rev. Well done Mr. Spitfire – this one certainly hits the target! 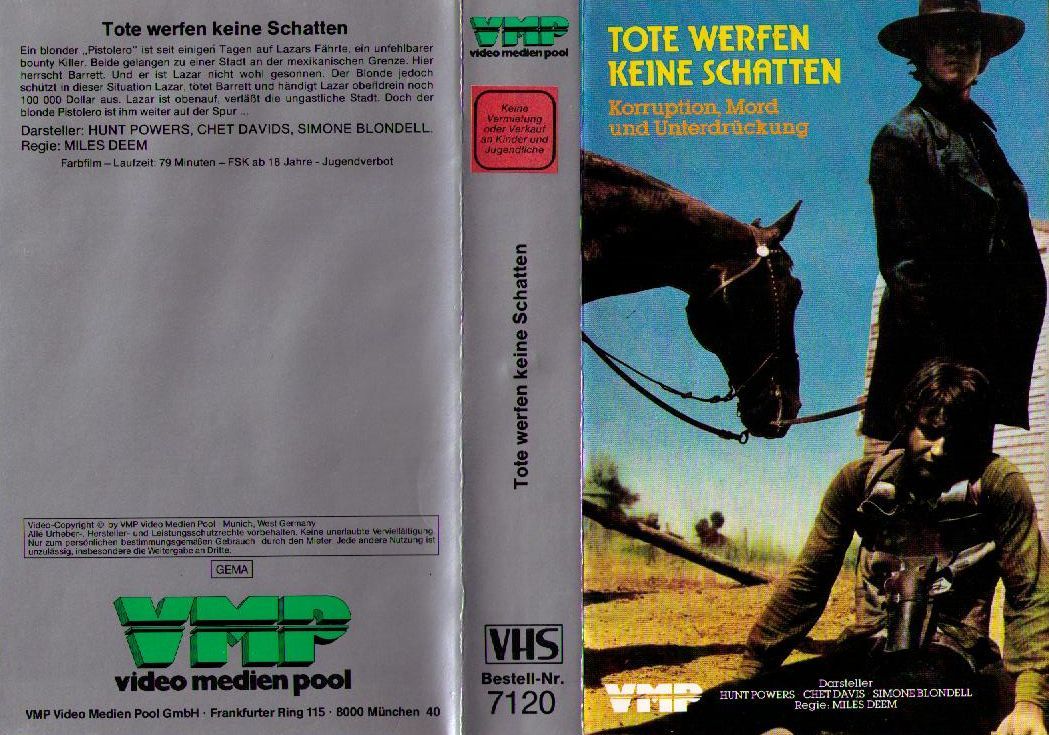 My VMP Video runs 79min only!? What’s the running time of your version, Rev.?

Nice to see you back in town Reverend

)- good to be back, but blimey it’s tiring work. Thought I’d better return with a review, and was amazed this didn’t have a thread. I’ll have to pace myself tho’, so will be going for a scoop soon…

My VMP Video runs 79min only!? What’s the running time of your version, Rev.?

I’ve got two versions … I should’ve said my source. The dvdr I’ve got which may or may not be the global effort runs in at 1.32:15, but is ropey for both sound and vision.
Better by far is the Wild East version at 1.32:13 (a couple of secs of credits missing maybe?) 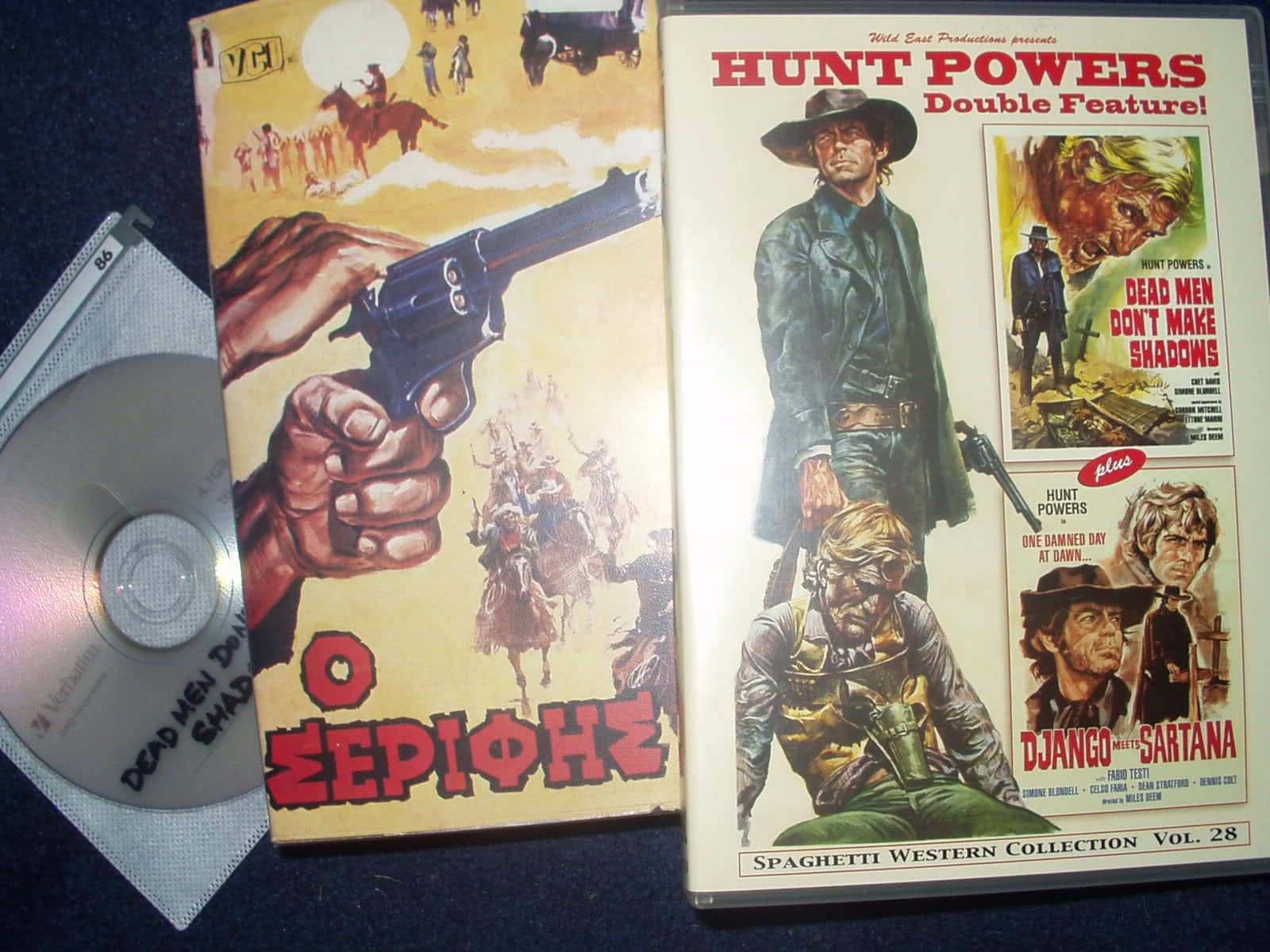 I’ve got a VCI vid of the other film on the disc, but I’m looking forward to WE’s version now.
I love the fact that they’ve stuck Gordon Mitchell’s head on the cover poster art deadman - cos this bit wasn’t him in the film … in fact it was the first fellah he brought in - 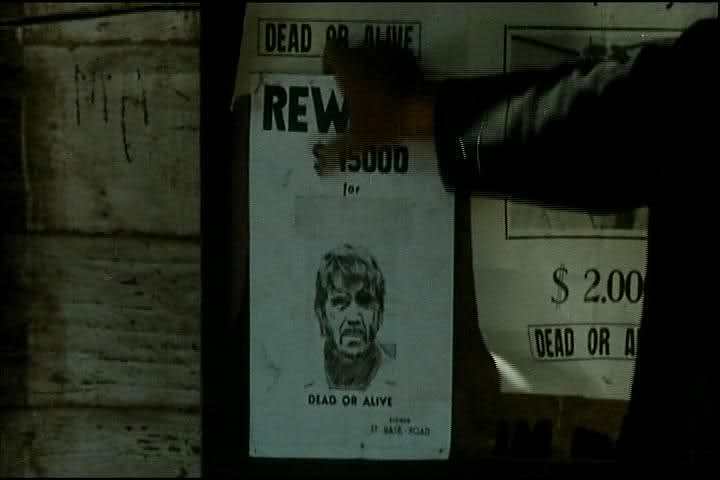 The man with no name! Is Fidani having a joke here y’reckon? ;D

Great to have you back Rev.
And back with a bang too. Great review.

I watched “Dead Men Don’t Make Shadows” last month but i can already barely remember anything about it. Granted there were a few standout scenes like the opening where Powers character drags the outlaw into town by his gunbelt or the numerous scenes with the ever so gorgeous Simone Blondel and Gordon Mitchell’s way too small cameo.

But overall the movie is just a letdown with some lackluster action sequences and a less then thrilling plot. I don’t know if it’s all Fidani’s fault cause the man does seem to try with every movie. But i get the impression that the extremely low budgets just weren’t enough for him to realize his ideas. Whatever the reason may be i have a hard time recommending this movie to any spaghetti western fan as it is.

I’m with the Rev on this one.
One of Fidani’s best in my book. Not without some of his usual failings of course (the man, I won’t say who to avoid spoilers, who gets shot in the forehead but still manages a few dying words springs to mind) but overall a pretty damn good effort and kept me entertained throughout. And you’ve gotta love those cacti. ;D

By the way, I added the above review from the Rev to the database.

By the way, I added the above review from the Rev to the database.

Awww! Thanks Phil, I feel all loved and important now - well, either that or just a lazy old sod who can’t get around to getting his arse in gear and learning how to do things for himself… ;D

Awww! Thanks Phil, I feel all loved and important now - well, either that or just a lazy old sod who can’t get around to getting his arse in gear and learning how to do things for himself… ;D

None of that Yorkshire metrosexual talk around here please Rev. We’ll just assume the latter eh?

Anyone know if the music for this one was reused from a different film? I’m assuming it was… it sounds so familiar.

My first post from London ( currently under the snow ), i liked this film one of the best Fidanis ive seen
had to laugh though at the blacksmith hammering away in the street ( with no visible heat source around ). Also the town looks like
you could blow it over , Hunt Powers is as inscrutable as ever ( or is that just bad acting…)

Welcome to the forum!

Better by far is the Wild East version at 1.32:13 (a couple of secs of credits missing maybe?)

My recording from Italian TV has a more or less corresponding run time, naturally PAL: the American Wild East DVD has a 25fps frame rate too?

I hadn’t seen a Fidani western until recently. I got the Wild East Hunt Powers doublefeature, and the first one i saw was DMDMS. For a cheap low-budget western, i thought it was good. Only let down was that Gordon Mitchel was killed way too early, other than that i liked it.

The ending did even things out with the a bit to full of himself Hunt Powers character. Probably the most enjoyable one I have viewed by the director so far.

This movie is still far from being good but I found it really entertaining and story wasn’t a complete mess.
By the way Jack Betts must have been a very good friend of Fidani, because I think that he had more charisma and screen presence that e.g. Anthony Steffen (Steffen played in better spags).

Watched this one last night on the Mill Creek 44 film set. Gotts say it was a decent film and better than I thought it was gonna be. Had a longer run time than most of the ultra low budget westerns I have seen but not a great deal of padding. Slowly paced with a chilling atmosphere and none of the comedy nonsence.
Credit to the acting as well which seemed better than average, a winner 4/5