Town is attacked with the bank being robbed and the bank owner getting killed. A stage is then robbed with one of the passengers being the bank owners son Clay Stone. Stone manages to capture one of the robbers in town, but not long before the robbers take a hostage and wants an exchange. The change goes well, then things start to get a little padded out re the story. Stone does not really show he is bothered re his fathers death, more interested in an old flame. Lost a bit of interest at this point in this uneven average one for me.

I’ve been getting a lot of these smaller obscure westerns that no one cares about (usually for a reason.) I watched this flick last night and I feel the same way. It was really nothing special, almost American-esque with nothing special really going on. I didn’t like the annoying little kid and did not like the upbeat music at times. I managed to stay awake so I’ll give the film that credit as I’ve been put to sleep by a lot recently! I was wondering did Jose Maria Zabalza really have anything to do directing the film? I see according to the datasbase it was really directed by Pino Mercanti?

I’ve been getting a lot of these smaller obscure westerns that no one cares about (usually for a reason.)

Often do the same myself

Watched this one a while back, pretty uninspiring, the Atlas Visuals DVD-R wasnt great quality either, one for the completists (…that’s probably all of us then ??? ).

I picked this as it had a better quality picture than others I dug out today, (that hadn’t been previously watched). But the music should have warned me off.

[/b]The dreadful opening ditty sounded like the Pythons imitating Nazis, boisterously chanting an old Bavarian drinking song. Unfortunately, this becomes the refrain most times we meet the bad boys.
And we meet our bad boys - led by cool looking 8) Fastdraw - as they attack the stagecoach that’s full of dosh and just arrived in town. In the process our hero’s dad gets cold-bloodily shot in the head by Fastdraw, and the boys leave town with the stagecoach, and FD with a pocket watch (nice) taken from dead dad to give to “the boss”.

We have an annoying kid who turns up every time there’s some gun action poking his real gun (no bullets) around and going “bang bang”. Unfortunately his yummy mummy pulls him back in to safety and we have to suffer this malarkey repeatedly throughout. But, it later transpires there is some method in this madness and guns get switched to ‘dramatic’ effect later on… I won’t ruin it for you as it’s one of the better bits of this poorly executed early spag.

We are introduced to our man - Clay Stone - and his fellow screen-grabbers, who are on another stage due to arrive to town. Amongst them is a cheerfully flirty gambler who’s telling Katy Dior (who’s going to sing and dance (et all) at the saloon) that he only gambles with women for their underwear - used* I can only presume!

These characters are held up by FD and they take Katy as a hostage in an attempt to make a decent storyline.
For some reason beyond me FD then goes to town, ties up the sheriffy types and gives Clay a slap (why didn’t he just do it before?). Anyway, when he comes out bangbangboy is on FD’s horse and whilst FD is distracted with throwing him to the ground and slapping his mum about, Clay gets his own back and FD ends up behind bars. Yummymummy gets a bit damp down there at all Clay’s fisticuffs and other assorted heroic stuff - and as it turns out she was an old childhood friend when they used to play ‘you show me yours and I’ll show you mine’ down by the river*. She will now be referred to as Freckles.

Yet another stage arrives in town, and this one has been attacked by Indians… for no apparent reason. I think it holds together some sort of incoherent sub-plot about a saloon gal not leaving town. There’s a thing about saloon gals that they seem to have made up on the spot, as some other young thing turns up - is told she is too young, but then ends up as gambling-boy’s squeeze - and finally gets to sing with exactly the same squeakily whiney voice as the previous gal. All of it pointless padding.

During a shitty ditty and some better can-can action, one of FD’s bullyboys arrives so Clay can make the womenfolk of Dallas go moist again. I gotta say it didn’t do much for me as fights go, as an acre of daylight can be seen between these haymakers as our boys swap punches.

FD is gonna hang so the bad 'uns get 1000 leaflets ??? printed - “If Fastdraw ain’t released from jail Katy Dior will be returned in pieces” - and they shoot up the town again in delivering these to the townsfolk (all 30 of 'em). And Freckle’s senses a rival.

There’s a bit of whip action involving our Bavarian beer drinkers and said rival back at the hide-out - but unfortunately :

this is tame compared to other stuff mentioned on the dedicated “Whip it” thread.

[/i]So, on it goes - barely distracting me from doing my work (as it was on a monitor behind my drawing board). FD gets broken out of jail by Clay, so Katy can be exchanged - we all laugh when she falls of her horse into the river taking a swing at FD - but it’s a good reason for her having her strip down to her bloomers (I got re-tracted) to dry off and flirt a bit with goodie-pants Clay, who’s otherwise smitten and only has eyes for Freckles.
But he’s done bad in getting Katy back - and the townsfolk are baying - and off to jail he goes. A deal is struck though - he’s got 48 hours to get the gang done for or his gambler mate gets hung in his place(!!!?) ???.

- but of course he will as we know that this is (technically) a pre-Leone, but the best bit is (honestly) about Bangbangboy’s rite of passage.
It’s all too cheesy and happy here, compared to those gritty post-Leone’s spag-ends we know and love.
So there you go - watch at your peril… but of course… watch it (eventually).

A reasonable print when it wants to be, it deteriorates for the last 20mins or so, as this bit is taken from a jittery Greek-subbed version; and there’s the aforementioned dreadful fight choreography; and even dreadfuller music, that do little to enhance this mediocre outing.

1 star would be as mean as FD… 2 stars as generous as Katy’s hints at naughtiness.

Thank the lord and pass the cider. The Rev is amongst us again. 8)

I’ve had this one lying around for a while and have been avoiding it as I suspected it would be as you have described it mate. I dare say I will cave in and watch before too long though just out of pure masochism.

Cheers Phil. I’ve never been fully away though, and pop in to see what’s a happennin’ with you guys even if I ain’t got a lot to say.

And I know that you like your early spags so it’s worth a watch (for comparative purposes at least) - even though it ain’t a great one.

I haven’t had as much chance to settle down with a spag these days, and when I have done so I tend to leave it, and half a glass of the holy apple juice, unfinished whilst I study the inside of my eyelids.
I randomly picked a bunch of stuff from my rhinestone encrusted box (D) today and rejected Anything for a Friend; Gunshy Piluk and Where the Bullets Fly in favour of this nonsense cos this was a better print - maybe I should’ve stuck with one of the others for my return to spagdom? … but Hey! they’ve all gotta be seen at some time

By the way and way off topic, I’ve been loving the Uke.
Denise, as she is called in these parts, has become a firm favourite with the family as well as myself and next time I see you we’ll have to have a bit of a jam. 8) 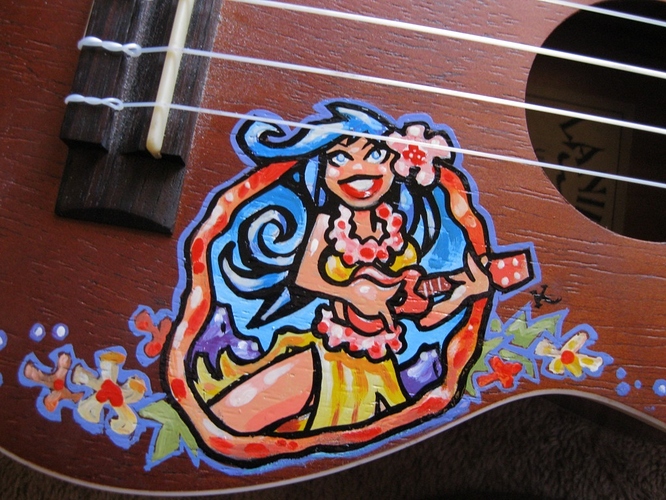 Was playing her just today.

Was there ever an English dub of this released anywhere?

A year later, thought I’d mention that this was put out on dvd by Mill Creek in their 4 vengeful western films set. Not on Amazon at the time of writing but it can be found elsewhere.