There’s some confusion about the release date of this one (unreleased in Italy):

Among other things the lead actor Claudio Undari (Robert Hundar) said that some scenes were reshot under pressure from the U.S. distributor, that expressly required a film with a strong impact on the audience.

Marco Giusti lists it as 1971. He is not infallible of course but usually pretty reliable.
Also, Time Out lists the U.S. release date as the January 1st 1972 date you quote. If that is at all reliable I can only assume it would have been released in Spain earlier. But then experience tells us to take nothing for granted in such matters.

I’ve noticed on some films that the date on the print is different to the imdb.

How could they mess that up? Or could it be a film could have been completed towards the end of one year and released early the next.

I’ve seen Once Upon A Time In The West listed as 1969 several times too. (not on there though ;))

Back to drawing board, and its good to be back
Maybe the third time I’ve watch this nihilist tale of survival, Some thoughts about it

Story
Not a bad one I always like it but now I know why. The premise of the main plot is very appealing, only the several plots going around the main story aren’t that well consolidated, the who murder my wife could have been better explored, and the two main characters, somehow looked poorly developed when compared with some of the bad guys.
Its always strange when one the main characters dies half way through the film, it would have worked better if Claudio Undari Sergeant Brown didn’t looked like the main hero of the film, but the film doesn’t follow the normal parameters of the genre.
In any case even if the story is good, its not always well told, for such a straightforward effort things sometime looked a bit confusing with the flashbacks and all, more precision was needed.

Joaquin Luis Romero Marchent, was one of the most important Spanish directors of the genre, maybe the most important, and perhaps the better one
I could sense a small or maybe a big twist in SW terms while watching Condenados a Vivir, while most of the SW until the Trinitá appearance, are based on variations of the Leone and Corbucci bulk of work, and werethe usual in the genre, Marchent goes to another source for this one, the new modern US Western from Peckipah and films like Soldier Blue. The ultra realism and the non stylized violence placed in the screen in a raw and direct way, without distractions or other meaning than violence itself weren’t that common.
Yes it didn’t worked that great with the gore, (not that much by the way), but I sense that the director wasn’t trying to transmit any subliminal messages, only to show us violence, the violence of survival. It does lack a more psychogical approach of things.
So even a Spanish classic director was paying attention to what was going around in cinematographic terms, and the thing is that I don’t remember that many SW influenced by US directors of modern westerns or non classical ones.
Cut-Throats Nine suffers from the low budget from which was made, and sometimes for such a claustrophobic story it losses focus from time to time losing that claustrophobic feeling, also some characters are not that well build, while other are build in excess, in particular the two bad guys that survived to the end, the female part (a lovely Emma Cohen) lacks definition.
So the director wasn’t totally successful in his intents, but it wasn’t an easy task for such a classical director, in a way Marchent was always more influenced by the classical westerns than for the modernism coming from Leone (he started to film westerns in the fifties), soothe final result is even more strange if you look at the film with that in mind

The strongest point of the film for me was the good and solid cast of solid actors with versatile backgrounds that gave excellent performances.
Undari was a solid and famous name in the genre, but actors like Tejada or most significant Alberto Dalbés are also excellent or even better than Undari. Emma Cohen like many Spanish (and Italian) actresses of the period made a career in both opposite sides of the artistic spectrum, from “Destape” films to art house efforts like Cria Cuervos, she was a good actress and a lovely looking one, couldn’t avoid to help noticing the perfect eyebrows she had in the film, which was strange for a character in such a distress as she was in the film getting raped and all-
But really no complains in this department

Conclusions
I still think it’s a good SW not a masterpiece, but a good and honest effort, that just lacks a bit of cohesion to be better. Marchent plays the modernism card with mixed results, a bit like Four of the apocalypse later on. Getting away from the usual revenge story path, was an important factor for my appreciation of the film, indeed things are not business as usual, ok the gore is hopeless, some characters are not that well worked for their importance in the film, but It was a Spanish made SW finished in 1972, things couldn’t be much better than this.
Also the music, with the choice of Gregorian chants of some kind give a horror felling that the film doesn’t have or need, it’s a Western not a Paul Naschy effort.
The English version even if made with good voices, is not that well translated, the film gains’ more meaning with the Spanish dub, which is a logic thing, because most of the actors were Spanish ones-
Above all I liked the approach choose by the director more than the substance or the form. At the time the public also liked cause it was a successful film in the Iberian Peninsula.
A solid 3 stars, in my top something

Anybody else see the supposed remake of Cut Throats Nine? Saw this link when I was browsing for a dvd:

Not sure of what to make of this or, regarding the date as little over a month old, if this actually is viable, but hey, would love to see it!

Just watched the Code Red release. I’d only seen this in fullscreen. Even if you don’t like the movie, which I do, it’s almost worth it for the scenery. The credited cast lists Juan Antonio Eliceshttp://www.imdb.com/name/nm0253577/. I’ve only seen his 2 westerns. The cast is very small in CT9 and the only other listed crossover with Death on High Mountain is Rafael Hernandez.

Is anyone familiar with his other credits and could this be him? 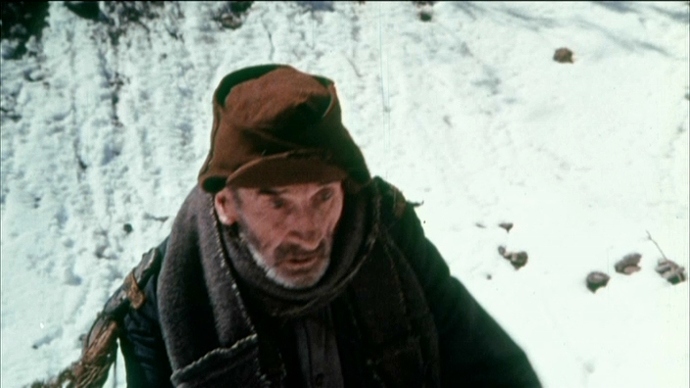 Just watched this. Hm, not sure what to make of it. I like how it looked and I love that it looks very different to other Spags EURO-westerns (I guess comparisons to The Great Silence in this respect are inevitable, although I think that TGS possesses a cold beauty entirely absent in CT9, which is more of a fascinating grotesque), I love the ceaselessly grim atmosphere, the sturm und drang that pervades everything (reminded me of The Texas Chain Saw Massacre in that sense) and I like the essential premise. On the other hand I think it’s poorly shot with some frankly hapless use of flashbacks and freeze-frames, the plot beyond the initial premise contains some laughably unbelievable elements, and I’m a fan of gore for the right reasons, and I’m all for a gory western but Cut-Throats Nine might just be the single most UN-necessarily gory movie I’ve ever seen. And did EVERYBODY have to be so fundamentally unlikable? Somebody to root for through the grimness wouldn’t have hurt.

Still, I’m glad I saw it, and I would heartily recommend it to others, if for no other reason than to make up their own minds. There’s a bloody good movie in there somewhere, amongst the grue.

I really enjoy this film. I’m especially drawn to its explosive conclusion. I do love me a good downbeat ending…

I’m not sure if I like the ending, at least i didn’t like it on the first time I saw the film. Now I’m not sure, it kind of fits the continuing dark atmosphere of the film.

I didn’t like the ending at first because it was out of sync, but the new DVD fixes it

The ending is a cheap way to close the story. I don’t like it.

Like the ending. Sums up the whole film for me…negative

Such a dark film deserved that climax. I can’t see it concluding any other way.

But I do think it’s interesting that some can’t dig it. Tis what makes the world go around!

It’s negative yes, that’s what is ok about it. But actually how could it have a positive ending with all those creeps alive? It would have been more negative to let survive this ugly bunch.

What don’t like is that it is a cheap idea to simply let them blow away. But it is lesser film for me anyway.

The last time I attempted to watch C-TN I only made it to about halfway, as I got bored. I’ll probably give it another look soon.

The last time I attempted to watch C-TN I only made it to about halfway, as I got bored. I’ll probably give it another look soon.

What happened to our friend chameleon?

Let’s hope he will reincarnate under a new nickname, just like in case of his metamorphosis from handcuffs into chameleon…

@Sebastian: Cut-Throats Nine (1972/Marchent) is still labeled to be in the Alternative Top 20 but it isn’t. Could you please delete the link above the film cover? Thanks!