I’m still convinced there’s got to already be a topic somewhere, but I did some searching and couldn’t find one…

Seeing all the conversation in the movie thread, I figured it warranted its own topic… here’s a couple posts from the previous discussion

[quote=“TheBigSmokedown, post:3529, topic:1923”]I find myself giving comic book recommendations a lot now that Hollywood is adapting so many. Anyway, allow me to start you off with five good comics:

Sometimes puerile, but pretty much consistently entertaining. All the spin-off stuff like Saint Of Killers is good as well, and very accessible for fans of westerns.

The first two volumes of The Ultimates are lavish, blockbuster affairs. Essentially a reimagining of the Avengers, Marvel has been mining these books for their various superhero franchises recently. The Ultimates is also a good introduction to Mark Miller, who is a bit of a love him or hate him sort of writer.

Still probably my favourite of Grant Morrison’s writings, this self-contained Batman story is beautifully painted by Dave McKean. In terms of best Batman story ever, it’s a toss up between this and Alan Moore’s The Killing Joke.

Frank Miller is a bit hit or miss in my opinion, but this is a great comic and less well known than Sin City. Originally Miller wrote Man Without Fear as a screenplay, but when then he adapted it for comics when it wasn’t picked up. It’s an origin story and Matt Murdock doesn’t become Daredevil until the final pages, so I can understand why studios may have been reluctant to show interest.

Astro City is just clever, charming writing with plenty of depth. It’s been going for a while now, and I haven’t read all the latest issues. What I have read I enjoyed and it’s a good example of a superhero comic which knows how to have fun with the genre.

You may well have read some of them already, but there you go, five comics from five different writers. The Walking Dead got a mention earlier and that is pretty good, although I got a bit bored with it and I’m feeling that it’s getting slightly overhyped now with the HBO show being so successful.[/quote]

And Comanche by Hermann and Greg is an excellent Western which probably tops every US Western comic.[/quote]

Thanks for starting this thread (I too am shocked that there is not one).

Astro City is solid and definitely worth checking out.

here is some stuff that I am currently reading:

The Walking Dead from Image Comics

If you want to read a longer version of George Romero’s Living Dead series then you should definitely check this out. Great writing great artwork and very adult stuff. 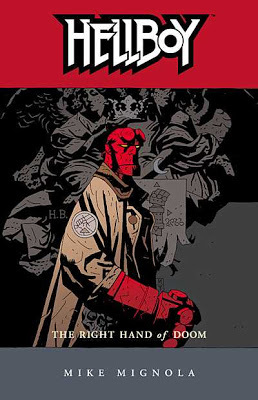 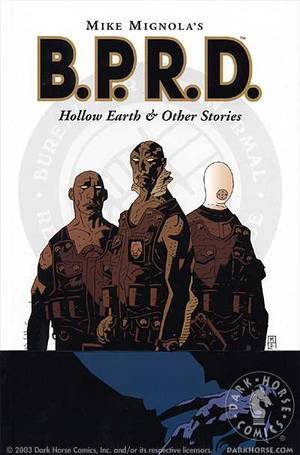 The continuation of the awesome Kick-Ass series. Check it out.

Nice selections, Frank. Kick-Ass is a very solid read, but if you like it then you could also check out Nemesis and Superior. I’m really enjoying Superior a lot at the moment.

I am planning on checking both of those out.

I am a big fan fan of war comics as well and I have been reading some of the following: 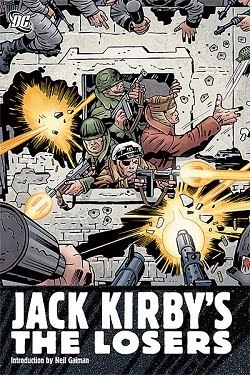 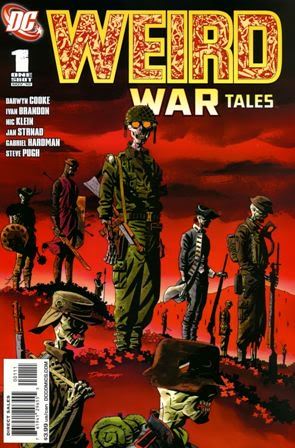 DC’s one shots revivals of classic war comics Star Spangled War Stories and Weird War Tales. I have the other three issues Our Army at War (Sgt. Rock), G.I. Combat (Haunted Tank), and Our Fighting Forces (The Losers).

I have found the entire run of Blitzkrieg (5 issues by DC) and some Army War Heroes (Charlton including the first issue with The Iron Corporal).

I love Kirby’s The Losers.

I love most of the stuff by 2000AD, especially Dredd, Rogue Trooper & ABC Warriors.

Also, follow most of the stuff by Grant Morrison, Alan Moore, Peter Milligan.

I have the 5 issue Blitzkrieg on order (a WW2 comic depicting Nazi/German soldiers not American or British).

I loved the Losers and I want to find more of them in Our Fighting Forces.

That being said I finished the remainder of the DC 1 shots from November and if you want to read an absolutely perfect comic that’ll hit home read Sgt. Rock (War is War!)

Not familiar with 1shots… thanks, will surely check it out…

Blitzkrieg is in my to-read pile…

Also, if you love Vietnam War Comics, I recommend Apocalypse Meow, it’s a manga… a must-read.
It has also been adapted into an animated tv series “Cat Shit one” set in the gulf war.

I am currently going to start reading Miracleman soon…

I’ve been reading Top 10 and am a couple of issues in. It was a short running series which I didn’t bother with when it came out. I’m an idiot, because it’s really, really good so far.

[quote=“TheBigSmokedown, post:10, topic:2596”]I’ve been reading Top 10 and am a couple of issues in. It was a short running series which I didn’t bother with when it came out. I’m an idiot, because it’s really, really good so far.

Another great Alan Moore comic. It has an end, but the announced continuation hasn’t surfaced, but instead a few spin-offs saw the light of day.

love Preacher and anything else Garth Ennis writes, his series The Boys is also very entertaining

I picked up Nemesis hardcover (Nemesis 1-4) and I read part 1 - wow what a sick twisted extremely violent and sadistic comic… Very well done.

I recently picked up some old EC comics - I got the entire run of Aces High (part of their new direction line which was post comic book code) and a some Frontline Combat comics (pre-code). In my opinon EC were leaps and bounds ahead of the competition back in the early 50’s… sad that idiocy ruled the land and they folded to peer pressure. If anyone loves EC they should definitely check out the EC Archives hardbound editions by Gemstone which have 6 complete issues in each book (yes they are pricey but the quality is first rate). I have Frontline Combat (issues 1-6) and have on order Two-Fist Tales vol 1 (1-6) and vol 2 (7-12). 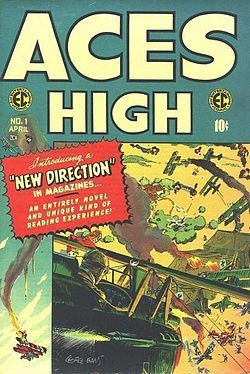 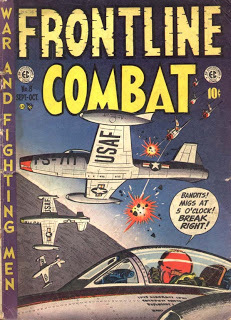 I picked up Nemesis hardcover (Nemesis 1-4) and I read part 1 - wow what a sick twisted extremely violent and sadistic comic… Very well done.

The first issue got me hooked, but by the end of the run I can’t say I was so impressed. It seemed shocking for the sake of being shocking and maybe too clever for it’s own good. Of course, the book looks beautiful and it was entertaining. I just didn’t like it as much as some of Millar’s other stuff is all I’m saying.

Since reading Top Ten, I’ve dipped into a few other series, trying to get a replacement fix for my journeys to and from work. The first thing I read immediately after was Ed Brubaker and Sean Phillips’ highly-acclaimed Incognito:

It’s about a supervillain relocated as part of a witness protection programme, who manages to blow his own cover. On the run and under threat from all sides, he begins to unearth all kinds of secrets about his past. If you’re a fan of pulp heroes, or even film noir, you owe it to yourself to check this one out.

Millar’s obsessed with alternative realisations of well-known characters, set in alternative universes. Red Son is therefore the sort of thing you would expect from him, as it’s set in a world where Superman’s spacecraft landed in Soviet Russia. As “What If?” stories go, this is one of the best, although in my opinion not quite so rewarding as his Old Man Logan or The Ultimates.

The X-Men can be so frustrating, simply because the writers tend to try a bit too hard to appeal to teens and partly because the continuity is such a mess. I read Grant Morrison’s New X-Men run, which had its moments, but seemed a bit detached from the X-Men legacy. Consequently I was hesitant to check Whedon’s run out initially, but decided I should give it a go after hearing nothing but praise.

I have to admit it’s pretty damn good so far. Whedon’s writing is very well-suited to comic book storytelling and superhero teams of this nature. I’m actually a bit more optimistic about the upcoming Avengers movie now.

I read Red Son a while back and it was good my biggest problem with it was it felt rushed… he threw too many characters in it towards the end and they disappear too quickly.
That being said the Anarchist Batman was awesome. Batman to me will always be king over the Man of Steel.

I too am looking forward to the plethora of Marvel Avenger movies coming out. Captain America and Thor look promising let’s hope they are solid. 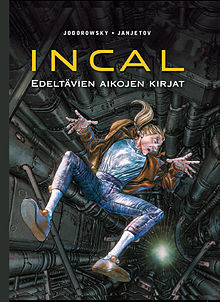 Prequel to original Incal series by Jodo and Moebius. I have only read the first part of the original series and don’t remember much about it but this was one of the best comic books I’ve read. I’m not usually that much into sci-fi but Jodorowsky writes such a crazy stories which really draws you in. Entertaining but deep, funny and at times just so absurd just like Jodo’s movies. That’s the one reason why comic books are such a great artform. I’ve been waiting for years to see another Jodo-movie but because of financial reason there will probably never be a new one, at the same time he has written loads of great comic books.
Janjetov artwork is great but unfortunately the version I read had been cenzored and digitally coloured which spoilt the beautiful line art.

I did finish Nemesis and I liked it a lot. I read that there’s a movie being developed and let’s hope they make it brutal.

[quote=“genesis_pig, post:9, topic:2596”]Not familiar with 1shots… thanks, will surely check it out…

Blitzkrieg is in my to-read pile…[/quote]

1shots is not a publisher but a one shot comic. One and done so to speak.

I too found Red Son a bit rushed… but I still enjoyed it a lot, loved the ending.
I also love All-Star Superman.

Incal is awesome, so is Metabarons.

I’ve really been enjoying the Palmotti/Grey run on Jonah Hex, especially the one-and-dones with Jordi Bernet on art. I drew this tonight after reading the latest issue: