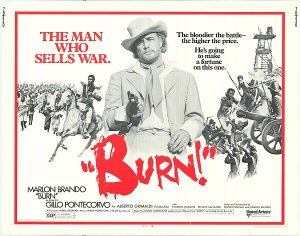 This is not a western, but it was co-written by Franco Solinas, who also contributed to the scripts of A Bullet for the General, The Big Gundown, and Tepepa . The script for this movie was rather long in the making. Actually, an earlier version of it, was rewritten by others and used for The Mercenary, which makes both films full cousins.

The very first version was influenced by Bertold Brecht’s ‘The Exception and the Rule’, a play about a rich merchant and his porter who must cross the desert to close an oil deal. Solinas and co-author Giorgio Arlorio turned this story into a three act drama about an American mercenary and a third world revolutionary. In the first act they would decide to cooperate, in the second act they would become aware of the cultural gap, while the third act would describe their downfall and violent death. Gillo Pontecorvo would direct the movie, with whom Solinas had already made the award-winning The Battle of Algiers (1963), and Burt Lancaster and Sidney Poitier were asked for the parts of the mercenary and the revolutionary. But the affair never came off the ground and was later rewritten by at least four people (among them Luciano Vincenzioni and Sergio Corbucci) for The Mercenary. Solinas and Arlorio disowned the new script, and used several elements for a different movie with director Pontecorvo, set on the imaginary Caribbean Island of Queimada. (Ironically some elements of the original script also popped up in Sydney Pollack’s The Scalphunters, starring … Burt Lancaster).

In Queimada the American has become an Englishman (played by Marlon Brando!), and he’s not a mercenary or a merchant, but an emissary of the British government, sent to the Portuguese colony of Queimada to inspire a people’s revolution, by promising the end of slavery to the black population, and favourable commercial relations to the white upper class planters. He teaches the uneducated slave Dolores the art of warfare, and pushes the planter Sanchez to assassinate the Portuguese ambassador and become the leader of a puppet government. His work done, he returns to England, but a decade later, the British government asks him to go back to Queimada, to fight the rebellion of his former friend Dolores. President Sanchez is executed for not fighting the rebellion vigorously enough, and Dolores and his men are tracked down by the local military, helped by British military forces. Dolores is hanged and when Walker is about to leave the island, he is stabbed in the belly by a black porter.

The Englishman played by Brando, is called William Walker. The historic William Walker was an American filibuster, played by Ed Harris in the Alex Cox movie ‘Walker’(which I have never seen). There are some vague likenesses between Walker and the character played by Brando, but the script seems to refer more to the Vietnam war (the fate of the leader of the puppet government is very similar to that of Vietnamese president President Ngo Dinh Diem, who was overthrown by the CIA and the Vietnamese military in 1963). Furthermore Spain and France were the dominant colonial forces in the Caribbean, not Portugal. Apparently the film makers changed the script after the Spanish government by means of general Franco asked them to and threatened to boycott the film in the Spanish speaking world.

Some elements – like slaves chased through cane fields – will remind you of spaghetti westerns scripted by Solinas, but otherwise this is a rather typical political allegory from the sixties, anti-capitalist, anti-imperialist, anti-a-lot-more, and expressing a rather silly but emphatic trust in the wisdom of the simple man. This feeling is even expressed in the choice of a former sugar cane plantation worker Evaristo Marquez for the part of the third world revolutionary Dolores: Sidney Poitier was already asked, but director Pontecorvo insisted on having an amateur. Brando – still good-looking and not yet lapsing into the mannerisms that would plague his later performances – is quite convincing as a Brit, but the problem, both for him and the movie, is that Marquez and he have not enough scenes in common to make their uneasy relationship work. The film often looks amazing, but the English language versions is not really served by some severe cutting, resulting in an extremely jumpy narrative. Still, despite the cuts, despite the naive Marxist ideas, the interesting aspects of the original story shine through, and when you hear about revolutionary leaders trained by Western forces and later persecuted by them, it’s hard not to think about a few more recent events. Don’t expect a spaghetti western, but if you’re interested in Franco Solinas, I’d say you’d better give it a change.

Maybe you should put this little review in the non western corner?

Has anyone ever made a fan-edit of this with Brando’s voice restored to the original Italian version (132 min, 1.85:1) and subtitles for the 15-20 cut minutes that he never dubbed?

Apparently the John Kirk MGM restoration, that saw limited theatrical release in the US about 5 years ago but never received a DVD release, simply used the Italian dubbing throughout.

Good question. I would like to see it if it has been done.

Isn’ this film connected to The Mercenary in some way? Hughes makes the production connection.

It’s connected to the Solinas SW screenplays by varying a similar story about revolution. So, yes, you can view it and think about it in correlation to Quien sabe, Tepepa or even The Mercenary.

It would have been no problem to make another SW out of the Queimada script. But it’s not an action film.

It’s connected to the Solinas SW screenplays by varying a similar story about revolution. So, yes, you can view it and think about it in correlation to Quien sabe, Tepepa or even The Mercenary. It would have been no problem to make another SW out of the Queimada script. But it’s not an action film.

Hmmm interesting. Coming after, but in the same vein as, his Battle of Algiers, this seems far removed from the SW genre. However, in the context of Zapata westerns, a connection can certainly be made. It just goes to show how nebulous a concept “genre” is.

Yes it is. The original story or screenplay of Solinas, which then later became La resa dei conti, was situated on Corsica (or was it Sardinia?).

He also worked on the screenplay of Francesco Rosi’s masterpiece Salvatore Giuliano (1961), which interestingly contains several shots similar to a SW.

A flawed but impressive film. Like everyone else, I long to see a restored version on DVD.

According to Franco Nero, this project grew out of Pontecorvo’s unwillingness to make The Mercenary - he was supposed to direct that originally but became uncomfortable with directing a straight-up Western, so made a few changes to the historical setting etc and came up with this.

Like Starblack said, flawed but impressive film. It’s usual with these serious political film that they just leave me cold somehow. I think Corbucci was on the right trail with his zapata westerns, as the political message is mixed with entertaining and exciting western with lots of action and fun. Works so much better for me. There’s some impressive action scenes in Quiemada too but somehow the right spirit is missing.

Brando is very good here, I think he has said this is his favorite movie among his own filmography.
Morricone’s music is good but underused in the film.

I love this movie and the Morricone soundtrack… I didnt realize I was watching a cut version! 20 minutes missing? Thats quite a bit.

Saw it today for the first time, the new Koch BluRay is excellent, and has a fascinating interview with the screenwriter on it. Both the international Italian, as well as the butchered US-Cut are included.

Thanks for the fantastic news. I’ve been waiting a long time for this one. Will use the link.

Thanks for the fantastic news. I’ve been waiting a long time for this one. Will use the link.

German review of it