Owner of a silver mine is being preasured to sell his mine by the local Mr.Big. Enter Dean Reed who pulls the town folk together and helps being a fast gun himself. Real reason Reed pops up though is revenge for his fathers death a few years back.

Catchy theme song sung by Reed, but less keen on his love style ballad later on in the film. Reed is a bit lightweight and would have preferred the film to be more gritty.

I think this movie is very rare
Until now i’d only the chance to get a italian version
Is your’s an english one,Ennioo ?

Average film, watched it recently but don’t remember much about it. I think Reed was ok but found Livio Lorenzon as a villain miscasted. I think he was better playing drunks or such, never liked him as a heavy.

In the Sheriffs Office/Room of the bandits there are two wanted posters. One of them is this of Clay Mc. Cord from the Giraldi film A minute to pray a second to die.
Isn’t it funny that they used this prop in this movie. Also the town is called New Tuscosa.

In the Sheriffs Office/Room of the bandits there are two wanted posters. One of them is this of Clay Mc. Cord from the Giraldi film A minute to pray a second to die.

Curious thing, cannot be regarded as a homage to the character because Giraldi’s movie was released more than three months later.

At least four posters were used in both films: three wanted posters – for CLAY MC CORD, FRED DUSKIN and LESLEY COOPER – as well as a poster announcing AMNESTY. According to the Spaghetti Western Database, the Internet Movie Database and the Archivio del cinema italiano dell’ANICA, Adelchi Bianchi’s Buckaroo (il Winchester que non perdona) received the censura approval on October 27, 1967, and was theatrically released the following day (as was Maurizio Lucidi’s La più grande rapina del West); Franco Giraldi’s Un minuto per pregare, un istante per morire was approved by the censor’s office on December 5, 1967, and released on February 8, 1968 (on the same day as Primo Zeglio’s Killer adios). Since the posters refer to characters and events in Giraldi’s movie, it seems obvious to me that Un minuto per pregare … was shot before or at the same time as Bianchi’s Buckaroo. Considering its different versions, alternate ending and title change, it probably took longer to complete Un minuto per pregare … than Buckaroo.

Interiors for Buckaroo were shot at Incir-De Paolis Studios, Rome. @JonathanCorbett: Do you know where Un minuto per pregare … was filmed?

Interiors for Buckaroo were shot at Incir-De Paolis Studios, Rome. @JonathanCorbett: Do you know where Un minuto per pregare … was filmed?

Sure, in De Laurentiis western town.

And in terms of cast and crew this one and Giraldi’s movie have nothing to do with each other.

Thanks! There being no other obvious connections between the two movies, the posters’ reuse and the almost identical town names are rather baffling.

There’s also the portrait of Aldo Sambrell from Fifteen Scaffolds for a Killer: here too the movies have nothing in common, and Quindici forche was released nearly two months later. 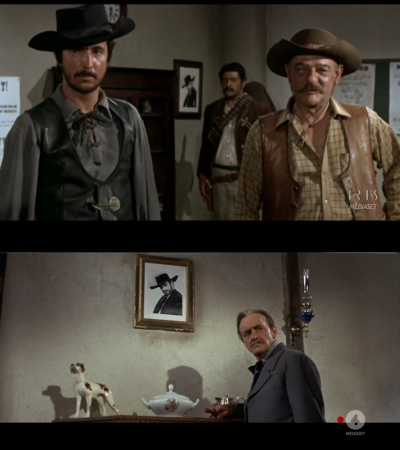 I’m not interested in ‘Buckaroo’, … but I’m drooling over that lower still from ‘15 Scaffolds’, what great quality after seeing only the shitty release from Wildeast DVD.

With the English dub, too! I have a copy with English subtitles only

I found an HD version of this film on YouTube

Appears to be the same copy aired on Italian TV channel Iris a year ago, but for some reason this YouTube version without logo runs faster than it should (and the same can be said of ‘Bounty Hunter in Trinity’).

my other YouTube link was deleted, here’s a new link to the remastered version