There’s a pretty good, and quite technical, review of the RUN MAN RUN BluRay also. As always, if you do order from Amazon, please use the SWDb’s links first before completing your purchase 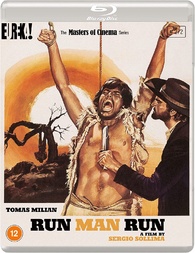 That’s a politician style comment! You seem to be actively defending shoddy produce and saying we should be thankful for it.
Obviously in the past, pre-DVD era, crappy VHS was almost the only way to see these films … but we’ve moved on a lot since then, and you only have to look at what turns up on You Tube in great quality, albeit low bitrate, that the source elements are out there … and Spanish TV show pristine HD prints regularly often with multiple language options, so do Amazon. So the point I’m making is , that this material isn’t as rare or inaccessible as some here may think.

It will take more than one or two distributors, who TBH seem rather half hearted about the whole thing, to get the titles we want released in the quality they deserve.

No, I’m saying that it’s not as shoddy as is being made out and that maybe you should take it with a pinch of salt.

if you do order from Amazon, please use the SWDb’s links first before completing your purchase

You guys see The Belle Starr Story (1968) is coming out from Raro in March? That is a pleasant surprise, I find the film quite enjoyable!!! Definitely going to be picking it up.

Just saw on the Blu Ray release calendar, and it’s coming out on my Birthday, definite pick up sign.

I’m assuming it will be region A locked, right? Anyone know if that is usually the case with other Raro releases?

Added: French releases of Navajo Joe and The Mercenary for April

Added: wide release of Shanghai Joe (as expected) incl. Amazon link, for May

I know, I hope they announce something soon, it’s getting close to the end of the month.

Yeah, at the least an announcement of what we can expect coming up would be nice.

I myself got spoiled with a new EM mediabook every month this past fall. Now I am craving more with nothing on the schedule from them.

Updating some of the Big Gundown specs in the database, as I am watching a preview copy of the release (see the movie’s topic). Most details were already correct though. Disc 2 is just the short version; and there are 2 short Thrower featurettes, not one.

It looks like Raro may not be putting the English dub track on their blu-ray release of Belle Starr. All the online retailers just say Italian audio with Eng subs. Really strange

Someone on the SW thread on blu-ray.com apparently got confirmation that the main cut will only have the Italian track, and the only English version will be the international cut that is presented as an extra, sadly only in SD.

what a bummer. it can’t be so expensive to put the dub over the longer cut and then insert a few subtitles for the missing parts, can there? damn