The day Kinski stopped breathing was probably a happy day for a lot of directors.

Blood At Sundown was one of three “bonus” SW if you wanted Taste Of Killing on a Koch release.
I watched the former today and the good things were the mood, music, landscapes and some acting by Garko as the villian brother to the Steffen antihero.

Steffen was obviously dubbed by the same bad voice as the leading actor in Taste Of Killing (and the antihero in Ramon The Mexican ).
I usually accept many types of plots in SW but this one lacked a plot except for that Steffen came back after 12 years in prison and wanted to fight his brother who acted like a village tyrant in general clothes. Their mother was an odd character with potential but maybe not plausible or very well developed.

Instead of story there was too much for my taste of rather boring fist fights and shooting. I doubt that I will ever rank Blood At Sundown higher than 6/10, but surely will watch it again within a month or so to get a bettering feeling for it.

4/10 from me. Those damn boring fist fights!

My view hasn’t changed much after the third watching of One Thousand Dollars on the Black which IMDb states as the title, but .
It seems to be 2 SWs with Steffen that are named Blood At Sundown. 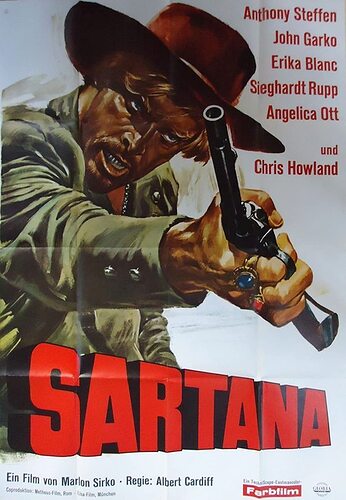 Sartana: Directed by Alberto Cardone. With Anthony Steffen, Gianni Garko, Erika Blanc, Carlo D'Angelo. Twelve years ago, Sartana framed his brother Johnny for murder and stole his girlfriend. Now the town's undisputed boss and doted over by his... 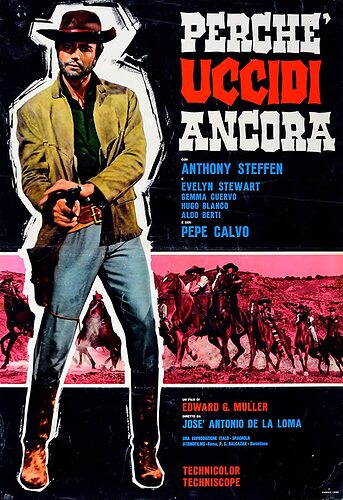 Jetzt sprechen die Pistolen: Directed by José Antonio de la Loma, Edoardo Mulargia. With Anthony Steffen, Evelyn Stewart, Gemma Cuervo, José Calvo. A young deserter from the army returns to the place where his father has been killed by a family of...

I think this SW is overall OK, but not very good. The plot isn’t nonexisting after all. The trumpet music is a plus. I give it a rather weak 6/10 ( I tend to give minimum a 6 if I feel OK entertained and can consider watch the SW again sometime), with a big complaint being near the end with the 4 minute, too long, duel fight and immediately thereafter a nearly as long wild town shooting, just before a rather short final duel shooting.

I wonder where the Sartana head quarter was situated. It doesn’t look like anything I remember to have seen in Tabernas desert area.

I rank this as number 36 in my Top SW list, where I now only include minimum 6/10 rated movies. Number 25-40 are all 6/10 rated so this one is one of the weaker. Some of these may get an increased rating in the future (My name is Pecos ?).

I wonder where the Sartana head quarter was situated. It doesn’t look like anything I remember to have seen in Tabernas desert area.

That’s because it’s a painting on glass … notice that none of the main actors are seen in close up during the Almeria scenes - they are doubles filmed by a second unit crew. Well edited together.

Yes it looked artificial to me.

So there was SOME manipulation those days in SW, maybe at ESPERANZA as well after all

I just watched Gentlemen Killer it is now a Steffen favourite of mine have you seen it?

I haven’t seen it but might buy a DVD/bluray if there will be a new release in the future.

I know Wild East have released it.

The Koch Italowestern Box No. 1 is a Good choice

I will remember that!

What else is on it?

Cowards Don’t Pray, A Sky Full of Stars For a Roof, Roy Colt & Winchester Jack. If you go the database page you can click you’re way through all available DVDs and Blu’s on the sidebar.

Thanks!!
I like Roy Colt and Winchester Jack. I might have to add that to my collection.

This is Definitely in My Alt Top 20

I’m so glad to have finally crossed this off my list thanks to Rarelust (how I haven’t heard of this site until recently is mind-blowing). I’m a complete sucker for over-the-top manic performances (one of the reasons I love Woods in Black Jack so much!) so watching a blinged-up Garko waving his pistol around and giving everyone crazy eyes is right up my alley. Steffen is just ok but I can forgive that when a more charismatic co-star backs him up. The slimy side characters, great music and nice shootouts make this a pretty fantastic spag for me.

My two main gripes would be too many fistfights (with the one between the mute and the main henchman going on for far too long) and some slightly bizarre editing (Steffen magically teleporting from a chair, to a rooftop, to infront of a stable in just a few seconds).